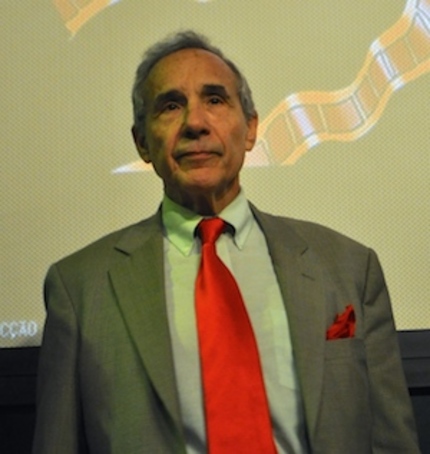 While the Troma retrospective is not over yet at Fantaspoa, Lloyd Kaufman leaved the city of Porto Alegre today in order to make of Cannes a Troma-occupied territory once more. During the night of the Brazilian premiere of Return to Nuke 'Em High Volume 1, I had the honor to interview the always kind and funny Kaufman.

ScreenAnarchy: I know you are leaving Brazil tomorrow, so tell me about the Fantaspoa experience and the video you are recording here.

Lloyd Kaufman: I'm recording some lessons for students. We have the Make Your Own Damn Movie Channel so usually when I come to an event like this and I'm just filming randomly, there is some kind of lesson that comes out of it. I don't know what will come out of it but I think in the case of this festival, I can show people that the true spirit of art is alive in a very big, important festival. I think that's the lesson.

I also interviewed Mr. Bruce LaBruce because all the students always ask me about raising money. I talk about how we do it but I asked him to talk about how he does it. That was very interesting and I also talked to Bruce about queer cinema because it's a new genre that didn't exist really as a viable economic circumstance when I began. I asked him if there are opportunities for new, young filmmakers there. Then I talked to Richard Stanley. I interviewed him about how he got to direct his movies.

I will edit this into a short video for my masterclass. I think it will be really interesting. I also got to interview Eric from Mexico... I'll put you in the piece. But it takes us a long time because we have a volunteer editor; they're just students who edit because we can't pay. It takes a long time before the movie is finished.

During the Fantaspoa Q&A of THE TOXIC AVENGER you mentioned how people got upset about the dog and that now it also happened with RETURN TO NUKE 'EM HIGH VOLUME 1. Tell me more about this.

In Return to Nuke 'Em High Volume 1 there are many people who die but the only complaint I heard was from a teacher in Long Island, who is a big Troma fan but he felt that the dog being thrown into Niagara Falls, which is clearly not a real dog, it's fake, looks like a toy... he was upset by that. Other than that, that's it. In my forty years I've had no complaints really. People stay away from Troma. I think they know enough to stay out.

I do remember we showed the The Toxic Avenger rough cut to our investors and one of them, a friend of mine, was going to bring his thirteen year old boy to the screening. I said, don't do it because he's too young and it's going to be terrible. But he brought his boy in the audience. Leni Riefenstahl, the Nazi female filmmaker who invented propaganda and did the masterpiece Triumph of the Will, was also in the audience. She worked for Hitler but she came to the US and was a friend of my stepmother.

Anyway, when the wheel of the automobile crushed the boy's head, my friend took his son and leaved the theater. The son was like "no, I wanna stay! I loved it." I didn't talk with the man for two years, though he invested in the movie. For the most part, people understand Troma and if they don't want to be offended they stay away.

In TERROR FIRMER, the collaboration with Motörhead's Lemmy became a little messy. How did it go this time for RETURN TO NUKE 'EM HIGH?

Wonderful, this time it was perfect. He was the nicest guy... he has always been nice, he just went crazy with Terror Firmer.

We were in the French Institute, Alliance Français, and there was air conditioning and we had to turn it off because it was so noisy and we had sound. Lemmy wants the air conditioning and I say "no, we must have good sound." Then he lights a cigarette in the place and it's the French Institute, they don't allow smoking and we'll get kick out. The location is very important because it's the escalator scene where Joe Fleishaker, the big fat man, gets grind up in the escalator. It was the only escalator we could find in New York City for free so I didn't want to get kick out.

Lemmy got crazy. He was very angry and walked out. We filmed the behind the scenes, we followed him with the camera. Then we became friends again. He's a good guy and he gives us music. In fact, one of my prodigies, Troma's editor Travis Campbell, made a movie called Mr. Bricks: A Heavy Metal Murder Musical. It's a micro budget movie and we gave him money. I asked Lemmy "would you mind giving a song to this unknown director? It's a very small movie that probably nobody will see." And he did. They are very nice people who love Troma.

You were talking about how KILL BILL inspired the volume 1 & 2 thing for RETURN TO NUKE 'EM HIGH.

Well, Quentin Tarantino said to me at Sitges, "do something ambitious, do something more monumental." He could see the future with so many movies being made and Troma making low-budget movies and our own distribution. We have no money so we should maybe do something different. I remembered that and when I saw Kill Bill in two volumes, I said "good idea, let's let Troma do two volumes." That's how that started.

I think KILL BILL: VOL. 2 is very different from the first volume. So RETURN TO NUKE 'EM HIGH VOLUME 2 is going to be different or what can we expect?

In our case it's one long story but like the original Class of Nuke 'Em High, the first half is more funny, slapstick. The second half is traditional action-monster-special effects. Volume 2 is not as funny but it has lots of action, non-stop.

It seems that the battle between 35mm film and digital is over. What was for you the definitive thing that made you change your mind?

Good question. Neveldine & Taylor of Crank and Crank: High Voltage; I acted in the second part and in their Gamer also. They told me that now digital is better than film and I started to test different digital cameras. I learned about the Arriflex Alexa and it is absolutely better than 35mm, but very expensive.

With the two volumes of Return to Nuke 'Em High I could only afford the one camera. I didn't have enough lenses. I didn't even have a zoom lens. I had a zoom lens that could change focal length but it couldn't zoom in or zoom out. On 35mm, I can have three cameras all the time. Here I could only have the one camera so it made it very difficult. But I think it's the best-looking movie. It looks really good.

Are you going to be in James Gunn's GUARDIANS OF THE GALAXY?

Yes, I will be there... for two seconds. I hope! We'll see but I think so. I'm hearing that people have seen me in the test screenings.

Fantaspoa screens Troma's War and Terror Firmer today (5/12); Cannibal! The Musical, Class of Nuke 'Em High and Poultrygeist: Night of the Chicken Dead will be shown tomorrow (5/13). Many thanks to Lloyd Kaufman and to his wife Pat for their generosity and time.

Do you feel this content is inappropriate or infringes upon your rights? Click here to report it, or see our DMCA policy.
FantaspoaFantaspoa 2014Guardians of the GalaxyLemmyLloyd KaufmanMotorheadReturn to Nuke Em HighThe Toxic AvengerTroma