Cannes 2014 Review: GRACE OF MONACO Is A Risible Mess 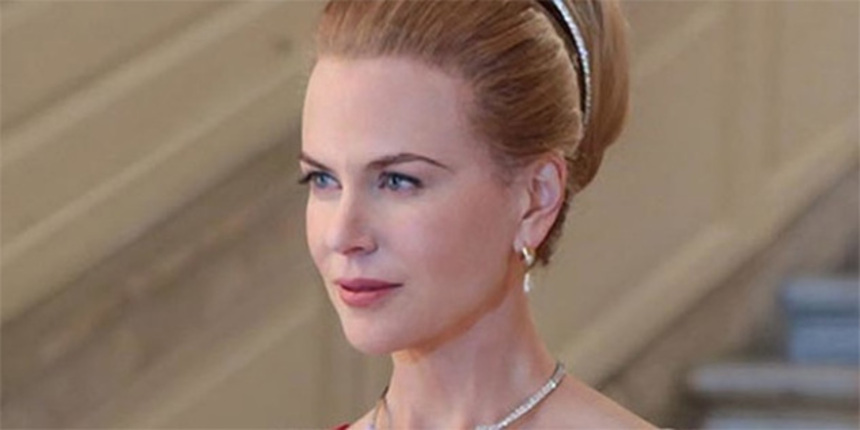 It gives me no pleasure to say that the opening film of this year's Cannes International Film Festival had members of the press mocking it during its running time.
At the second screening, when the credits rolled and the lights were still off, someone yelled "Bravo" in a sarcastic, douche-bag-ish tone, and it was followed by the very same "haw haw haw" stereotypical laughter that the students of West Springfield demonstrated as being "en Français" to Lisa Simpson [on TV's The Simpsons].

Speaking of cartoonish blondes, Nicole Kidman's portrayal of Grace Kelly comes close to looking the part, but the whole film feels as forced and awkwardly taut as the post-injection facial muscles of Ms. Kidman.

Now, let's be clear, I'm a big fan of this actress, and a bigger fan of Kelly. There's a lot that could have been done here, but the film seems insistent in creating a kind of potboiler drama instead of a rich or interesting biopic. The credits are almost apologetic when they emphasize that while the film is based on true events, it's a work of fiction.

If that's the case, it's a pretty maudlin work, and is completely unnecessary.

The central theme of the film -- pointed out with such regularity that it becomes the cinematic equivalent of a mantra -- is that Grace's final, most accomplished performance was when she acted the part of wife and princess to her people. In terms of the execution of this storyline, the film makes Evita feel like a Doris Kearns Goodwin dissertation.

Grace of Monaco flits around history and teases Grace's eventual demise without having the chutzpah to give her actual ending any screentime. Not that we were waiting the whole film for a car crash, even one foreshadowed by a recklessly driving princess acting out in a petulant way, but it does seem like the lead-up to that accident might have provided a bit more dramatic heft.

Director Olivier Dahan directs the film almost like a musical, at least one shot at the behest of Tom Hooper. Awkwardly intense closeups mingle with broken-fourth-wall stares out to the bemused audience. I swore at one point Kidman's misplaced cloying dialogue and delivery had shifted into her channeling the orgiastic pomposity of (the delightful) Moulin Rouge.

Story-wise, we miss all the lead-up, the courting, the wedding, and so on, and skip right into a kind of political opera that plays out like the worst game of Clue ever.

The film is, in some ways, worse than I make it sound -- even the sparse bits of glamour and royal performances, evoking everyone from king of thrillers Alfred Hitchcock to the imperious Charles de Gaulle, seem more pantomime than pomp.

At its worst, Grace of Monaco is a graceless piece of hagiography and wish fulfillment, a princess tale trumped for emotional engagement and sophistication by the likes of Frozen. While it's nice to see Tim Roth get work, and Kidman does manage in a few shots to evoke the epically beautiful Ms. Kelly, this is a forgettable flick that is made all the worse when screened just miles away from the principality that she spent the last years of her life in.