Tribeca 2014 Review: The Jury Has Reached a Verdict: ALEX OF VENICE is Guilty of Being Great 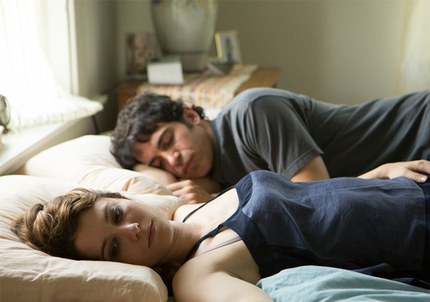 Life is hard, struggle is real. There should be a class in college that teaches about how life really works -- lots of disappointment, heartbreak and starting over when you thought your life was set. This is perhaps the most personal kind of curveball life throws at you and for some people, it happens a lot. Life is hard, struggle is real. But you can change and you can heal your wounds and carry on. To quote the great Broken Social Scene, "All the time we get by trying to figure out our lives."

Alex of Venice stars Mary Elizabeth Winstead as the titular character, Alex, an attorney currently fighting to save the planet. She's a tender heart who's looking out for the Earth -- as well as people years from now we will never meet, walking the same mountains as others did 100 years before. Preservation is where her heart beats. Alex lives with her 10-year-old son Dylan (Skylar Gaertner, who seems more grown up than most actors his age), her husband George (Chris Messina, who also directed the film), and her absent-minded, pot-smoking, free-spirited, washed-up actor father Robert (Don Johnson, in a knockout performance).
Things are busy but seem to be working. Until one night George tells Alex he's leaving her. He's tired of her working all day while he plays Mr. Mom. Not giving Alex a vote, he leaves. Alex's life is now thrown into a vortex of chaos -- all she's known is school, school, school, and then work, work, work -- now she has to quickly learn how to take care of her son alone, her father alone, and focus on winning the biggest case of her career. Welcome to the suck! life just screamed at her.

You could not have cast a better lead than Winstead in the role of Alex. She has matured from her early roles in horror films, to more impressive fare such as Smashed. She has grace, courage, knows how to move the audience and the camera loves her. While her resume up 'til now is a mix of blockbusters (Final Destination 3, Live Free or Die Hard) and indie favorites (Scott Pilgrim vs. the World), this will change as she continues to grow into her profoundly blossoming career. This is an actress ready to do great things. As Alex, she always wears a look of determination, even when she's exhausted and losing the new battles thrown at her: learning how to be alone, taking care of her family and keeping the job she's worked her entire life for. Alex is a tender soul but does her damndest to keep it together. It's an admirable trait not many can do, let alone be challenged with.

Alex of Venice comes with an arsenal of characters that balance out the hard times with moments that are truly enjoyable. There are times when Alex smiles and you will smile with her. I guarantee it. Don Johnson as Robert, her uncouth aging father still looking for that starring role, is terrific. This is the best I've seen Johnson in years. Perhaps in his entire career. I just want him to out-live Planet Earth. Lily (Katie Nehra, who also co-wrote the film) is Alex's loose cannon sister who just moved back home and turning the place into an animal house. She's also free-spirited and lives life day-to-day. Lily is the kind of soul who can make it work. She's the kind of sister who will take her nephew out for an impromptu day of fun in the sun, table hockey included (what child wouldn't love that?). Oh, and before I forget, one of the best character actors working today, Beth Grant, pops in as one of Dylan's concerned teachers.

It always intrigues me why a first-time director, such as Chris Messina, chooses a project they didn't write as their first feature. I'll never know but when the credits roll, the writing is on the wall. Or, in the script, I should say. Chris Messina plays Alex's future ex-husband and also made Alex of Venice his directorial debut. Like Hitchcock, Messina doesn't put himself much in his film. I'm not comparing Messina to Hitchcock -- that would be foolish -- I'm saying he made a wise decision by focusing more of his time as a director than an actor on his film, just like the Master of Suspense did in all his. There are so many first-time directors who star in their feature films -- perhaps for budget reasons or vanity (looking at you, Zach Braff), and it's a dangerous gamble. How can someone who's never sat behind the lens before pay attention to the major details -- lighting, angles, acting, mood, etc. -- when they are busy in front of the camera speaking their lines? (Bring on the arsenal of insults, Tarantino fans, but it's pretty unanimous he's the worst actor-director in the history of actor-directors. The best acting decision he's ever made was acknowledging his terrible performances by blowing himself up in the one scene he's in in Django Unchained.)

Alex of Venice is a sweet reminder that it's OK to start over. Sometimes life needs to be shaken up a little bit. Alex of Venice is the first in a long time that feels so natural. Alex doesn't completely fall to pieces - she does have a little fun but in the end, life goes on, she learns it's OK to hurt and things will get better. All in all, Alex in Venice is one of the finest movies about starting over I've ever seen.

Do you feel this content is inappropriate or infringes upon your rights? Click here to report it, or see our DMCA policy.
alex of venicemary elizabeth winsteadtribeca