Tribeca 2014 Review: Slinging Potatoes And Pills BENEATH THE HARVEST SKY 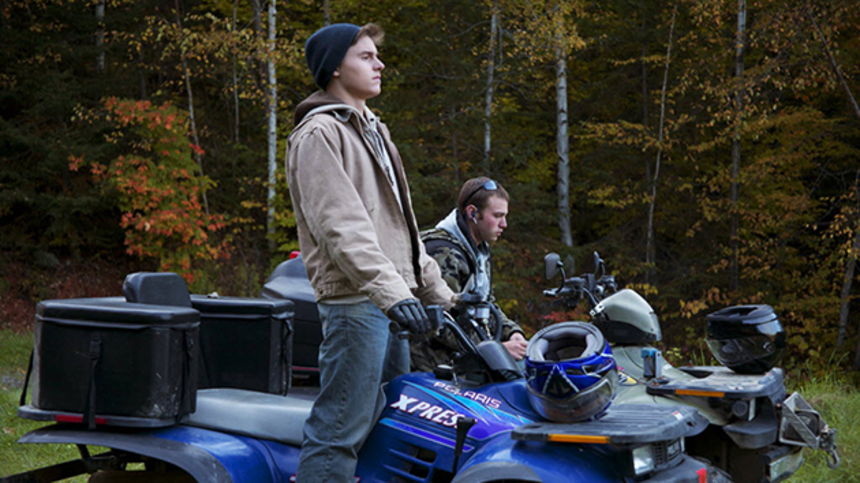 People have been trying to escape small towns since the existence of small towns. In fact, you could argue that The Garden of Eden, as perfect as it was, was the first small town, and Adam and Eve subconsciously wanted to get thrown out. Life certainly got a lot more interesting once they did.

This urge to explore is ingrained in our DNA, so it only makes sense that it's reflected in our art. Whether it's four guys from Dancer, Texas, or a whiny kid working a moisture farm on The Great Chott Salt Flat, we identify with characters looking to get the hell out of dodge.

But a hometown exodus doesn't come cheap, especially if the dust you want people to eat is produced by a sweet used Corvette. The optimum occupation necessary to acquire this getaway chariot would be that of local drug dealer, so hopefully your family is already well-established along the Northeast Corridor. If they aren't, well... there's always potato farming.

These are the money saving endeavors engaged in by best friends Casper and Dominic, respectively. Once sufficient money has been accrued, they aim to leave their dreary lives behind and go catch a Red Sox game at Fenway. And then... there were a lot of strings on that map, and there are a lot of horses under the hood of that Vette, so who knows?

But first they have to make it through the summer, a minefield of budding romance, family issues, and divergent priorities. Both characters contemplate trading freedom for security, the unknown for the inevitable, youthful ideals for more sensible options.

The most striking thing about this potatoes-and-pills bildungsroman is its authenticity. The characters on screen feel like real people, especially the two leads, played by talented newcomers Callan McAuliffe and Emory Cohen. It also features a great supporting turn from Aidan "Little Finger" Gillen. The small Maine town the boys are trying to escape is so evocatively portrayed, it's like a geographic antagonist. Everything about the filmmaking is effortless and naturalistic, which makes sense, as directors Aron Gaudet and Gita Pullapilly have a background in documentary.

The tone of the film is pitch perfect. The only misstep, for me, was the inevitable sacrifice to the gods of melodrama. It felt like a foregone conclusion, to bolster the emotional heft of the film. It seemed rushed and a little bit random when compared to the measured approach of what came before. Up until that point, the film had done such a good job of avoiding sentimentality.

Still, despite my issues with the ending, Beneath the Harvest Sky is a very strong narrative debut. They say marriage is a team sport, and that there is no "I" in "team." Husband and wife Gaudet and Pullapilly prove the rule, as they have an impressive singularity of vision for a duo. This feature should earn them some well deserved attention.
Joshua Chaplinsky is the Managing Editor for LitReactor.com. He has also written for ChuckPalahniuk.net.

Beneath the Harvest Sky