Review: PROXY Dwells On The Dark Side Of Parenthood 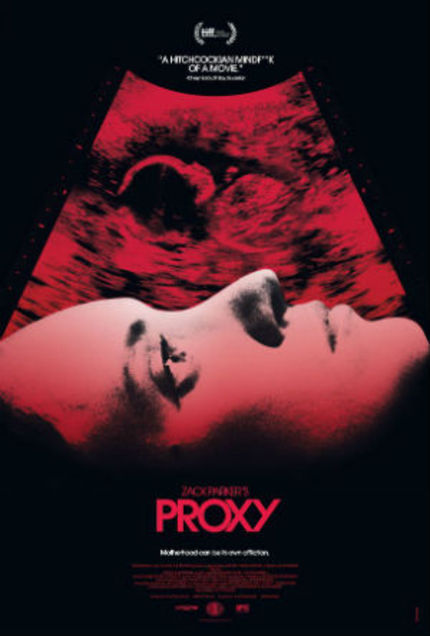 Munchausen by Proxy Syndrome is a relatively rare form of child abuse that involves the exaggeration or fabrication of illnesses or symptoms by a primary caregiver.

The central idea around which everything swirls in Zack Parker's Proxy is as brilliant as it is dark, exaggerating a real medical condition in a similar fashion to what David Cronenberg did with the hysteria and outcry when soft core skin flicks were shown on local TV stations - the result was Videodrome - or how Paul Solet examined, in his film Grace, how newborn children sap the resources of their mothers and bring about an anxious protectiveness. The best horror movies exaggerate the anxieties of our times. Proxy illustrates how the egos and minds of new parents (or parents to be) can be flush with the kind of endorphins akin to a junkie's high.

The ideas and narrative style of the film have a rare quality that make it very difficult to ever deduce what is going to happen next. As someone who sees far too many movies, most of which follow the usual formulae, I am grateful to not know exactly what is going to happen next. However, many of the directorial choices and some of the acting mar what is otherwise something great.

Esther (Alexia Rasmussen, channeling Angela Bettis in May) is viciously victimized during the ninth month of her pregnancy. Through the help of her doctors and support workers during her recovery, she is encouraged to continue to receive support at a group for grieving parents, where she meets Melanie, a mom who lost her husband and small child in an accident. The two women seem to be happily taking advantage of what these support groups have to offer, an unguarded venue for sympathy and strength. Until, that is, a little bit of unspoken advice from Fight Club kicks in: Beware the dangers of being a tourist of support groups.

When the first 'bottom' drops of what is really going on in Proxy, shaking it from 'sad indie' mode and into something else entirely, then -- if the film hasn't lost you -- that tiny thrill shudders down your spine at the possibilities of where things will go. Shifting narrator perspectives as the film progresses, without ever repeating a scene, is also quite invigorating, as is an homage to Stanley Kubrick's The Shining, where the camera is right below a character looking upwards as they struggle with themselves and stare downwards. I am surprised that more filmmakers don't copy that shot, it's shockingly effective at showing a character's mental break, as it did for Jack Nicholson, and does here. 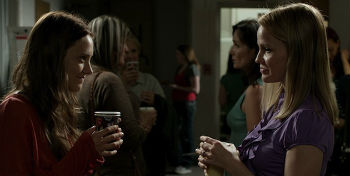 The issue I take with the film, something that is absent from its early moments of violence, is that later on it seems to revel in the violence in a cheap fashion. Some slow motion photography later in the film is so ludicrously ineffective, it inspires laughter, and breaks the spell that Parker had been fashioning with his characters all along. It is an act of cheap horror-schlock, something that, up until that point, Proxy sidestepped.

In addition, a tattoo artist and a lady cop with minor scenes are so utterly terrible in their line deliveries that it further undermines things. Joe Swanberg has a significant part; while his acting is not exactly terrible, there is something decidedly off about it, maybe because he is the only male in a movie driven by action-oriented but absolutely nutter females. A lesbian girlfriend is quite empowered and competent, but is also shown masturbating for no discernible reason, other than cheap thrills. Parker and his co-writer Kevin Donner were stay-at-home dads when they wrote the script, and often things seem to be an unholy mixture of observation and flat-out fantasy.

Gripes and disappointments in execution aside, the concept and narrative strategy are too compelling to let these and a slightly too long running time get in the way of what is a unique little indie horror picture. We simply do not get enough of these, and I am happy to accept what is coming to me.

Going for sympathy and attention of those around you by exploiting your children, and getting off on it, seems to be a post-millennium malaise. Even if the parents who are guilty of this (in a less exaggerated way as portrayed in the film) were to find Proxy, they are unlikely to see the forest for the trees due to some of the directorial decisions, and that is a darn shame. What we are left with is hoping for a remake that can iron out some of the indulgent kinks.

Review originally published in slightly different form during Fantastic Fest in September 2013. The film opens in select theaters in the U.S. on Friday, April 18, and will also be available to watch via various Video On Demand platforms. Visit the official site for more information

Do you feel this content is inappropriate or infringes upon your rights? Click here to report it, or see our DMCA policy.
Alexia RasmussenJoe SwanbergZack Parker