Benjamin Umstead
Editor, U.S.; Los Angeles, California (@filmbenjamin)
Tweet Post Submit
Tales of boyhood, of one's family, and one's town, are a down right staple in TV Land. From Leave It To Beaver to The Wonder Years, it seems that every decade of television must have at least one iconic male-centered coming-of-age show (even when said show takes place a couple of decades behind present day).

In 2012, actor Chris O'Dowd and co-writer Nick Vincent Murphy decided to fictionalize their own rise to adolescence on the small screen. Those who took notice of their efforts were treated to the earnestly charming, delightfully goofy and occasionally bawdy Moone Boy... which consists of the chronicles of one young Martin Moone (David Rawle), his imaginary friend Sean Murphy (O'Dowd), and the whole Moone clan in the small town of Boyle, Ireland, circa 1989-1990.

With the arrival of season 2, it can now be argued that Moone Boy is this TV decade's defining male-centered coming-of-ager.

The fact that it takes place over 20 years ago is most certainly a part of its charm. O'Dowd and Murphy's don't necessarily come from a place of nostalgia with their look at the early 90s, but have a chirpy, kooky fondness for what were, for them, more innocent times. And they do this without ever stripping away any content that would be considered more adult in tone, whether it be sexual, political or ethical.

For instance when we last left the Moone clan, eldest daughter Fedelma had been knocked up by Dessie, the church choir and band director. That story is the one arc that is seen through in this second season, which is mostly made of standalone tales.

Premiering on Hulu today in the United States, season 2 is reviewed in full over the next few pages. Click to the right of those adorable mugs (bearded and unbearded) below, and we'll go episode by episode to see how it all stacks up. 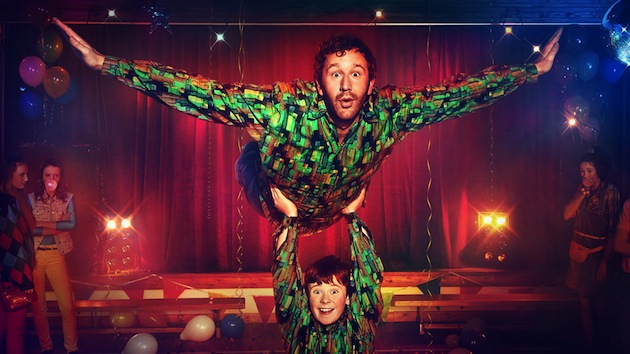 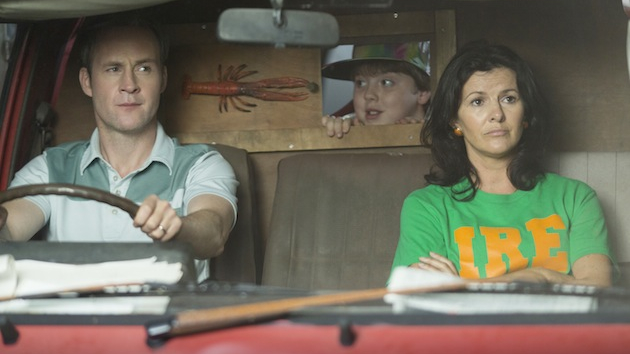 Our reintroduction to the Moone clan does a great job of balancing and blending A and B stories, main and supporting characters into one of the shows best episodes yet.

Dad Liam Moone decides to take the family on holiday right when Ireland qualifies for the World Cup, for the very first time. Ever. Mom Debra ain't to happy about her hubby's decision. Nor is Martin (and Sean), who after witnessing Ireland's latest match exclaims "Another triumphant draw!" (a soccer joke even us Americans can find funny).

The family's trip to an Irish only speaking region of Ireland lends further to an interesting commentary on the supposed divides encountered in nationalism, or just general prejudice. Liam, who initially called the Irish team "A bunch of English lads with Irish grannies kicking the ball around in green jersies", gets into the act with his fellow Irish-speaking Irish ahem. Meanwhile, Martin, who ran away from holiday to return to his beloved Boyle, ends up watching the match with a family of Romanians, who just happen to be the team Ireland is playing against.

The delightfully off-beat C plots tie into the era on the pop culture side, with Martin's best buddy Padraic finding his summer fashion inspiration in Back To The Future Part 2 (his imaginary friend Crunchie Haystacks is Doc Brown), while second eldest sis Trish mourns the breakup of Talking Heads, which means, yes, we do get to hear a little bit of David Byrne yelping. 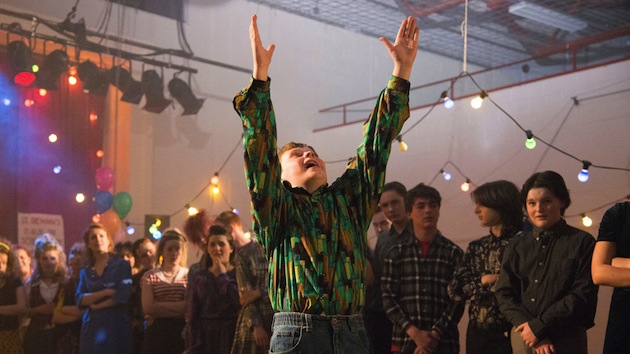 The summer holidays are over and Martin and Padraic are entering secondary school, which means they're going to school for the first time with girls. And Martin's sisters.

As the boys begin to navigate the byzantine world of adolescence (in classic TV fashion Martin falls for his cooky art teacher), Debra takes it upon herself to run the back-to-school dance, which was cancelled simply because, well, no body really cared.

O'Dowd and Murphy write some of their absolute best scenes for young performers David Rawle and Ian O'Reily to really own with an eagerness and awkwardness alike. Martin likens his first day at "big school" as "Dipping my toe into the adult sea… like a peckish shark. Or an eager shark, excited by the prospect of a bigger boat." He then walks straight to his old school.

The boys then have their first walk n' talk at their new school, a scene chock full of some fantastic jokes, which then ends in just about the finest gag centered around Patrick Swayze, periods, and scrunchies I have ever seen. Because, you know, there are a lot of those going around.

The dance brings the whole Moone clan together, giving Fedelma's Jesus loving baby daddy Dessie the chance to propose to his gal in a room full of well, mostly children. One of them an awkwardly dancing brother. Awkward because no one can see his imaginary dance partner. Of course. Sadly. 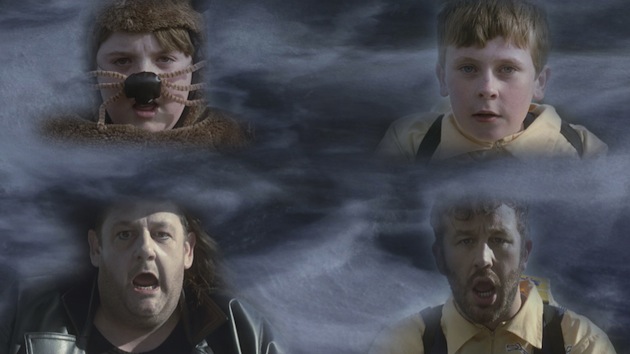 What is far more terrifying than an empty ghost ship coming into port? Why a ghost raft, with two 12 year old boys on it, dressed as a beaver, and (considering who you talk to), either a ghostbuster or a plumber. Because, well, that is far more unexpected.

It took Martin and Padriac all summer long to build their Huck Finn inspired raft, and it now being Halloween, well...

While the ensuing rafting adventure doesn't add up to much more than ping pong with a lonely islander named Island Joe (or Joe of the Island), we do get some fine jokes and gags, namely Crunchie's Cornetto song, and the boys thinking that Enya's 'Sail Away' is a sea shanty. Which, yes, does lead to a brief, if beautiful music video reenactment.

The B plot about Fedelma not being asked to read Bible passages during mass because of her pregnancy, which subsequently leads to a protest mass by the younger upstart Father Linehan is far meatier in conflict, but is isolated enough from the rest of the story to feel a little tacked on, thus proving that Moone Boy is most certainly at its best when as many of its characters can eventually come together to wrap episodes up. 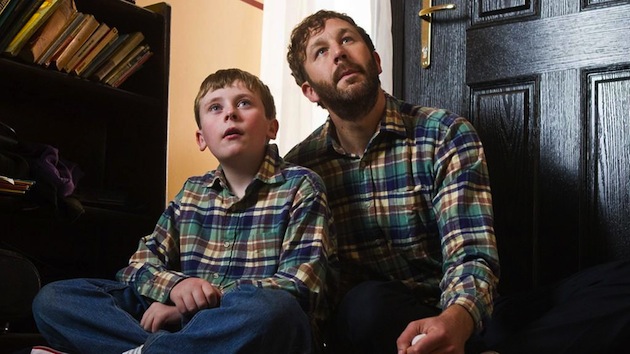 Novelty and concept wear thin in the season's weakest episode which centers around Liam facing off against an old rival from his handballing days. Or as he described it "the summer of '67: sex drugs, rock n' roll, and hand ball."

The thematic backbone of the episode hinges on money and status -- or lack of -- with much of the Moone family being sidelined, for what becomes a sort of, almost, father and son story. My issue here is that while Liam's rivalry with smarmy golfer and former handball adversary Kevin Leech is seen through, it just kind of thematically/emotionally fizzles out.

And yet, the MVP of this episode is no doubt Peter McDonald as dad Liam. McDonald, brings a sort of sweet and dopey nature to Liam, something that we can see in his only son quite clearly. He's almost always the brunt of his daugthers' (or wife's) jokes, and just the town's veritable doormat, and yet, his daftly heroic nature is infectious. It's darn fun to watch him bat around a golf ball with his hand.

My single favorite joke comes from guest star Simon Delaney, who upon hearing his cellular phone ring, declares "I should answer that… no one has ever called me on it before." It's a shining example of how self-aware the show is at times, and how much it can revel in such splendid on-the-nose-ness. 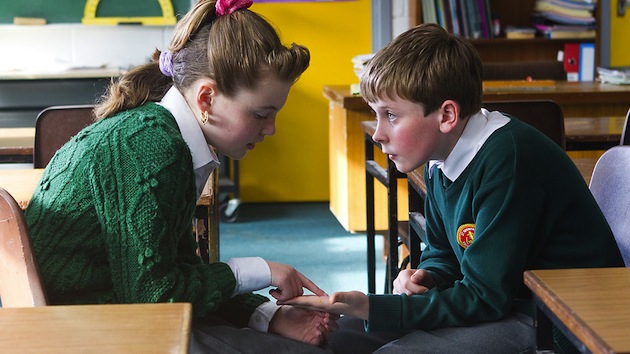 It's now spring of 1991 and Fedelma is almost due, which means wedding bells too. To get ready for both events, the gals prepare a hen night (bachelorette party), while Father Linehan ropes Liam and his friends on going stag with Dezzie at the church.

Meanwhile, a family of travelers (politically incorrect term: gypsies) park their camper vans and horses in the field next to the Moone house. While playing second fiddle to the adult's shenanigans for much of this episode, Martin does end up befriending (and soon enough girlfriending), traveler lass Majella.

Moone Boy once again tackles class prejudice in a way most American shows (Curb Your Enthusiasm excluded) rarely do. Liam's interactions with the elders of the traveling family is awkward, and veers into bullet-sweating territory, but it is the contrast with his son's open-mindedness that merges into the core of the episode. For as goofy and silly as this show can get it (and in the most splendid of juvenile ways, because after all it stars a 12 year old), it surely tackles such subjects as race, religion, sex and class in surprisingly upfront and earnest ways.

And then there's the joke about a prison stag party, and ever the faintest whisper of a gang bang. 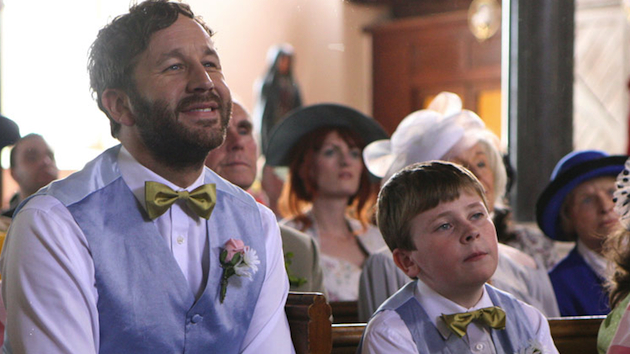 Fedelma and Dessie's big day is here. Only that day is also St. Patrick's day.

With Martin on top of the world thanks to his girl Majella, the boy could care less about tying his shoe. One untied shoe + a boy with his breakfast doth leave a sister's wedding dress covered in chocolate milk... and honey, and flour, and toiler cleaner, and gasoline. Because how else are you going to get chocolate milk out?

The main plot of the episode deals with Fedelma going into labor during the incredibly long Catholic ceremony, which sees Father Linehan as both the presiding priest and Dessie's best man.

As a wrap up to a near stellar season, " The Boyle Wedding" is a charming and heartwarming closer, which leaves Martin losing his gal back to the ways of the road... but gaining him a pet donkey. Everybody's got a part to play and the finale scene with Trish riding a horse on a beach with her new beau is pretty priceless. Because, heck, it's Trish. 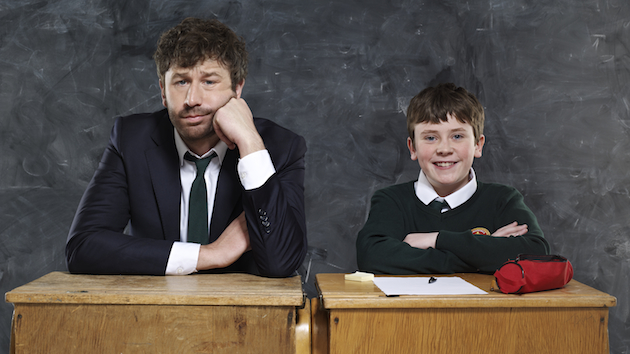 Moone Boy is, with little doubt, a classic in the making. While most shows that choose to focus on family squarely look at dysfunction or all out battles between parents and kids, Moone Boy happily knows that all brothers and sisters, moms and dads, best friends and townsfolk alike, are a little weird, a bit eccentric, and probably at their very best when supporting each other. It does all this without ever feeling saccharine, and yet is still somehow kind of quaint, while of course being hilarious (even in sometimes racy ways). This is such a rare balancing act that it leaves me scratching my head. The Simpsons and Roseanne achieved similar things during the era Moone Boy takes place in. But those shows could at times be very venomous, while Moone Boy has no discernible vicious bone in its body. In this way The Wonder Years may be the easier comparison, but that show was never ever this silly. And what is childhood if not a little silly? Case in point that opening image of ours. That is the show in a nutshell.

With most networks' programming winding down for a few months, you'd be hard press to find a finer show than Moone Boy for the meantime. If you're needing to play catch up, then the 12 episodes that make up both season 1 and 2 are more than a suitable replacement for, say, the likes of Brooklyn Nine-Nine, Broad City, or Parks And Recreation (three of my personal faves this past year).

And with a third season and possible movie to wrap it all up, O'Dowd and Murphy's silly little universe will live on. Thinking as much fills me with such glee that all I can do is probably just go and watch season 1 and 2 again.

Do you feel this content is inappropriate or infringes upon your rights? Click here to report it, or see our DMCA policy.
chirs o'dowdcomedycoming of agedavid rawlehuluirelandmoone boynick vincent murphyTV