Man has always been fascinated with the end of the world, but filmmakers seem extra intrigued recently, with World War Z, It's A Disaster, This is the End, After Earth, Oblivion, The Fifth Season, and Cloud Atlas all tackling the subject cinematically over the last year or so. Now we can add Denis Hennelly's Goodbye World to that list.

With equal parts comedy and heart, Hennelly's film is one of the more entertaining films on the list. With a realistic scope and interpersonal relationships that sing of sincerity, Goodbye World is the kind of indie that has real potential to break out and find an audience. If the world doesn't come to an end first, that is.

Set almost entirely on a remote Northern California hilltop, Goodbye World stars Adrian Grenier and Kerry Bishé as James and Lily, a married couple who have decided to raise their young daughter off the grid in a large solar powered house atop said hill. Nick and Becky (Ben McKenzie and Caroline Dhavernas) pay a long overdue visit to their old friends that coincidentally coincides with a super virus tearing through the world's computers and bringing society to its knees.

This goes undetected by the couples until old college pals Laura (Gabby Hoffmann), Lev (Kid Cudi), and Benji, who brings along his college-aged fling Ariel, (Mark Webber and Remy Nozik) show up separately; perhaps acting out some long ago devised emergency plan. The situation seems serious but not quite so dire they can't take the time to revel in their reunited company. But as the days go by and the severity of the situation becomes more apparent, the stress of the scenario takes its toll on the gang as tempers flare, formerly healed wounds are ripped open anew, and old romances are rekindled.

Co-written with producer Sarah Adina Smith, Denis Hennelly's script is a smart, densely packed examination of interpersonal relationships under increasing intensities of internal and external pressures. The apocalyptic backdrop is explored in particularly compelling fashions. For instance, what happens to commerce when roving bands of bikers show up in town and impose their own pricing structure? The larger turns the story takes in regards to the broader picture of what is happening to society always prove interesting and, for the most part, rather believable. 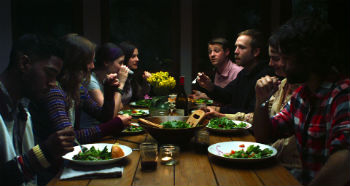 The film is also very funny. A staple of indie filmmaking, Goodbye World features one of the best executed young-white-people-drinking-wine-around-dinner-table scenes in recent memory with witty banter bouncing around like an Ariel Hsing table tennis match. Much of the film's tightness can be attributed to the chops of editor Greg O'Bryant, who demonstrated similar skills in Joshua Leonard's very funny indie The Lie.

The laughs come in rapid bursts but when the melodrama kicks in, it feels earned by the rich groundwork of character development already laid. Plenty of credit is due the excellent cast with each member pulling their weight, helping to make this a true ensemble success. Indie filmmakers take note, this is the kind of interesting indie cast that features plenty of recognizable faces (Grenier the most obvious), yet doesn't rely on all-out star power to sell the film. Catching a number of actors on the rise, this has the potential to be a seminal ensemble when viewed from well in the future.

It's no easy task to take material so thoroughly explored and make it feel fresh. Hennelly and his team should be commended for putting in the necessary work to keep this interesting. With its fascinating ideas, solid performances, and plenty of laughs throughout, Goodbye World is one of the most entertaining indies of the year. Let's just hope society survives long enough to see it find the success it deserves.

Review originally published during the Los Angeles Film Festival in June 2013. The film opens in select theaters in the U.S. on Friday, April 4.