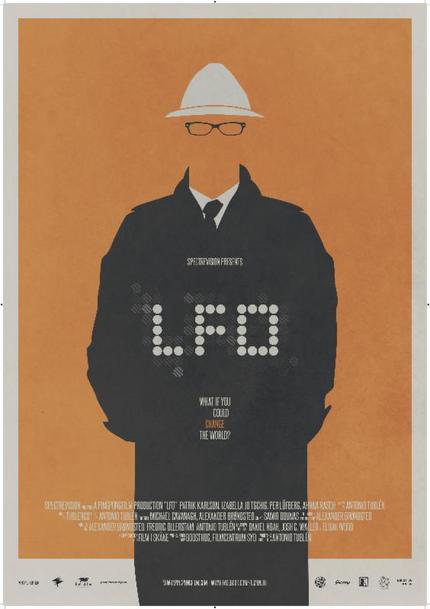 For the past couple years at Fantastic Fest I have taken to getting international directors drunk and making them review their own films. One such director to succumb to my boozie entreaties at the 2013 edition of the festival was Sweden's Antonio Tublen who rambled on about (sort of about, anyway) his scifi effort LFO here. Nope, it doesn't make sense to me, either, but we had a lot of fun doing it.

And very soon audiences who want to try to decipher what exactly was going on in Tublen's brain as he wrote this will have the chance to do so with word that Spectrevision - the genre imprint owned and operated by Elijah Wood, Daniel Noah and Josh Waller - have come aboard as exec producers with MPI to release the film on US shores.

Writer-director Antonio Tublen's film is a darkly satiric look at our modern obsession with technology and the toll it can take on human interaction. Robert Nord (Patrik Karlson, Wallander), a loner whose sole passion in life is the analog sound equipment in his basement, stumbles upon a frequency that allows him to hypnotize people. Testing it on his attractive new neighbor and her unassuming husband (Izabella Jo Tschig, Per Löfberg), he soon realizes the power he now wields. As Robert indulges in the increasingly twisted possibilities of having complete control over others, it quickly becomes clear that he is losing control of himself.

Do you feel this content is inappropriate or infringes upon your rights? Click here to report it, or see our DMCA policy.
Antonio Tublenelijah woodlfompiSci-FispectrevisionswedenPatrik KarlsonIzabella Jo TschigPer LöfbergAhnna RaschDrama