SXSW 2014 Review: BIG IN JAPAN Is A Raucous Adventure In Wacky & Wonderful Tokyo 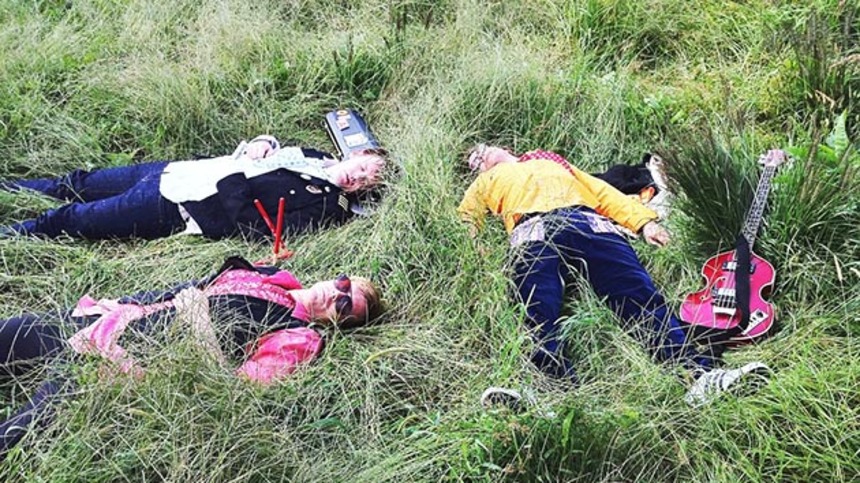 "It's not the language barrier... it's a different problem," states one of the members of Tennis Pro, the band at the center of Big in Japan, as the bandmates try to wash their clothes in a Tokyo laundromat. This statement pretty much sums up the theme of the film; a fictionalized tale of the real life band that leaves their waning popularity in the States behind to try to make it big in... well... Japan. It's a fish out of water/coming of age story about a bunch of aging men who are forced to reassess everything in their lives and confront their choices before this last opportunity gets away from them. It's also a hell of a lot of fun.

The story starts off with the three guys playing a show in their hometown of Seattle that they can't even get their closest friends to come out to. A chance meeting with a music producer offers the guys a potential chance to play some gigs in Japan and Tennis Pro makes the tough decision to leave their wives, children, girlfriends, and day jobs back home and have one last go at making the band work in a viable way.

Phil Peterson, the bassist, (all the band members and pretty much everyone in the film plays themselves, all using their real names) explicitly states to his wife that this is it. If it doesn't work out in Japan, the band is through. However, all that confidence gets quickly squashed when the band finds themselves in over their heads. The producer, real life grunge hero Alex Vincent, states that they each get their own rooms, but what they find is that they are sleeping in mere cubby holes, the size of a large man's coffin. 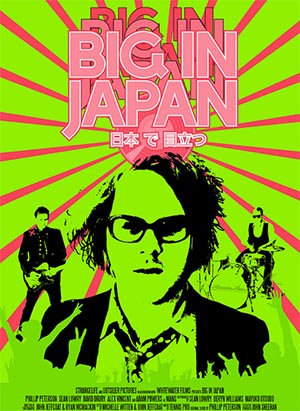 Likewise, the first shows the guys play in Tokyo are hardly more attended than their empty venues back in Seattle. Drummer Sean Lowry has had enough and lobbies to head home but as the crowds start to grow little by little, the guys convince him to see it through. Then an amazing thing happens. The guys start to make friends (guitarist Dave Drury even makes a love connection). And as the fellas form bonds with the city and its people, they find themselves having experiences that reinforce their personal friendships and more importantly, inspire their music.

One of Big in Japan's greatest strengths is the wonderful chemistry between the characters. Using a real band brings a great amount of authenticity and charm. The "actors" have fantastic rapport on screen because they do in real life. They are playing their own songs and one gets the impression that there is plenty of verisimilitude. Yet the flipside of this tactic means the film is populated by non-actors and the lack of professional training can be glimpsed in a few of the films more emotional scenes.

That being said, the movie is full of sweet, goofy, fun, sad, and enduring moments. The charisma of the bandmates is enough to keep one engaged in the story and that fascinating theme of, "when is it time for an artist to give up, (if ever)?" is made palpable. Their expression of frustration at this conundrum is honest and thought provoking.

It's also incredibly fun to explore Tokyo along with the guys. Director John Jeffcoat does a fantastic job of showing us both the wild and the wonderful side of that city. Where some director's might have just focused on the crazy rockabilly dudes in Yoyogi park (and they are there, by the way), Jeffcoat also rather remarkably shoots a scene inside the Meiji Jingu shrine just a little ways down the park. The juxtaposition of these elements is fantastic and as anyone who has spent time in Tokyo knows, a wonderfully realistic expression of what the city represents.

While Big in Japan is surely a dream come true for fans of Tennis Pro, it is also extremely enjoyable for those of us who don't know the band or their music at all. It's a raucous adventure in a foreign land that comes with plenty of humor and genuine human interaction that's a joy to watch. But there is also something more to grab onto here. No, "It's not the language barrier." It's about a search for something deeper. For Tennis Pro, the trip to Japan forces self-examination, leading to a genuinely deeper self-expression. For the audience, that search resonates in potentially profound ways.

And even if not... hey it's just rock and roll.