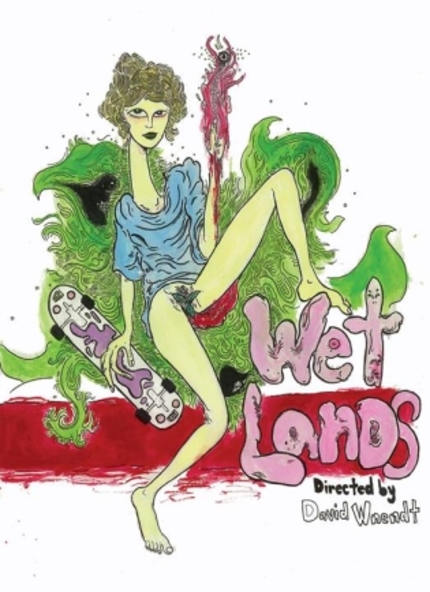 When a film begins with a teenage girl deliberately smearing her genitals all over an especially disgusting public toilet seat, you pretty much have an idea what you're in for.
Wetlands, director David Wnendt's sophomore feature after the award winning Nazi girl drama Combat Girls, is certainly not for the faint of heart nor the weak of stomach. It is, however, a compelling, puzzling, disgusting, and hilariously honest look at growing up learning to cope. Even if the film falls into incongruous convention in the final few minutes, the journey is well worth the energy as Wnendt and his bold starlet, Carla Juri as Helen Memel, go where no filmmaking team has gone before in exploring the lengths to which we will all go to just find a happy place.

Helen is a girl with curious hygienic habits. She also owns her sexuality in a way that will, assuredly, make many viewers uncomfortable or even physically ill. However, that is who she is, and she makes no apologies. From her rather explicit experimentation with produce for sexual gratification, played for comedy by adding in a diary for documentation of the results, to her unflinching commitment to exhibitionism for the sake of making others uncomfortable, Helen is her own woman, and you can accept her or get fucked (maybe even by her).
When a shaving cut in a delicate location leads to greater physical harm than most such injuries, she finds herself hospitalized and convinces herself that she can reunite her divorced parents by staying as long as possible, forcing them to interact and fall back in love for her sake. She gets more than she bargained for when her isolation from the world she seeks to exploit forces her gaze inward and the bursting hemorrhoidal growth from her ass leads to emotional growth.

Are you uncomfortable yet?

It's a question that Wetlands seems to ask over and over again. Just when you think Helen has settled down and learned from what most, including her own family, would consider her mistakes, Wnendt whisks the viewer on a disorienting roller coaster ride through her life-till-now. Everyone and everything starts somewhere, and Helen's habits didn't burst forth fully formed. She, like most children, had peculiar habits, but nothing out of the ordinary, at least not until her mother, a vagabond woman who swung from church to church and man to man looking for peace, unwittingly nurtured them by declaring them forbidden fruit.
The amazing and gratifying thing about Wetlands is that while the film certainly uses Helen's peccadilloes as exploitable elements to lure the audience in, it never judges her. To have a woman onscreen narrating her sexuality in such a confident manner is certainly startling, but this is her world we're living in and she knows what's best for her.

Stylistically, Wetlands is a mighty leap from the front-facing bluntness of Combat Girls. While both films utilized non-linear narrative form, in Combat Girls, the goal was clarification of character, while with Wetlands, the flashbacks often serve a more obfuscatory purpose. The idea is to illuminate the origins of Helen's vulgar behavior, but Wnendt's use of Helen as the unreliable narrator serves only to draw us in with disbelief and cognitive dissonance.

Wetlands is an exploration of these near contradictions and the manner in which they can manifest, and more importantly, how it's okay to be however you are as long as the only person you affect is yourself. The problem with Helen is that she seeks companionship, not outwardly, and not intentionally, but we see when she loses her best friend in one romantic entanglement after another, just how deep her need to not be alone runs.
Her outward behavior is partly a result of her reacting against her restrictive unstable mother, and partly a cry for companionship, not a cry for help. Helen is looking for someone with whom she can connect, and the only way she knows how is to put into practice the old Marilyn Monroe witticism, "if you can't handle me at my worst, you don't deserve me at my best."

Helen's love is a trial by fire, and it's a pretty fucking hot fire. As a heterosexual male, I don't know that I could face those flames, but there's someone out there for her, and he may be closer that she thinks. Her extended hospital stay leads to a peculiar flirtation with one of the male nurses who is both frightened and drawn to her in a way that many people might be. However, the only hesitation I have with the film is the simplicity with which the film ties its loose ends, perhaps that's my own tiny, TINY puritanical streak peeking through, though.

Wetlands is not a film for children by any means, but it's kind of a shame that it isn't. Its message of acceptance and the idea that you can be a fuck up throughout your childhood and still be a person of value is one that every child on Earth deserves to hear. Perhaps someday they'll be able to tell that story with slightly less explicit masturbation and vaginal sliming and the world will be ready to listen.
Until then, David Wnendt gives the sophomore slump a firm fist up the ass in what is likely to be one of my favorite films of the year and already tops the list. Wetlands is dirty, explicit, romantic, tragic, psychedelic, raunchy, sexy, repulsive fun, and I loved every minute of it.
Sign-In to Vote
Tweet Post Submit