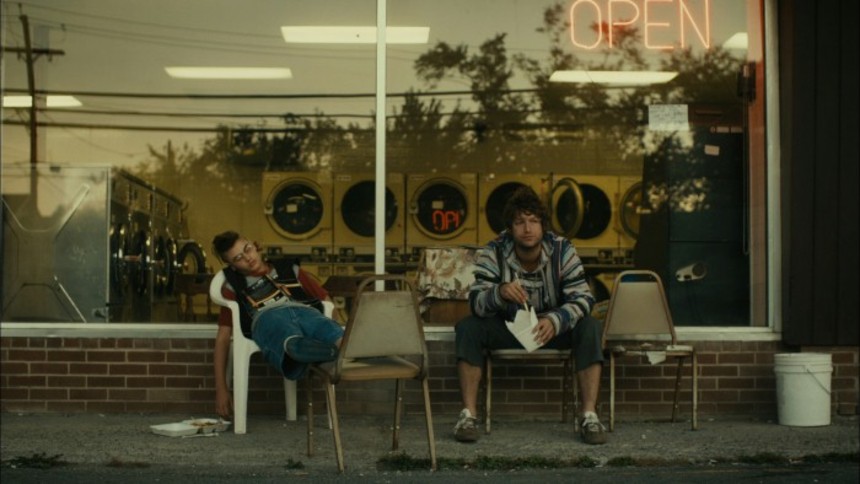 Often, films challenge morals: what is right, what is wrong, and what happens when you pick a side. There are times, however, when nothing is resolved yet the question lingers throughout the film. This is the baffling case of The Cold Lands, an inferior case study on doing the right thing.

The Cold Lands opens with a mother (Lili Taylor) giving her son Atticus (newcomer Silas Yelich) a history lesson in remote backwoods of Catskills. She is a woman who's grown self-reliant and wants that for her boy as well. They're always surrounded by nature, so everything to sustain life is right at their fingertips. Things take an unexpected turn, however, when the mother suddenly dies and Atticus takes off into the woods to live. As the days go by, he meets fellow drifter, Carter (Peter Scanavino), and the two rely on each other for company in the good ole countryside. But is that a good idea?

Before nestling into a sleepy and hollow plot, The Cold Lands starts off really strong. We learn very early the mother is sick of some sorts and is afraid, but her face wears bravery around Atticus. She's smart and wants her son to grow up intelligent as well. The Cold Lands begins losing momentum when Taylor exits the film - she does come back, but as a figment of Atticus's imagination - and Atticus is off to survive in the woods. In the short amount of screen times, Taylor's connection with Yelich feels natural and un-rushed. It's a shame she had to go so soon--it would have been a real punch to the gut if they had more time together.

The majority of the film focuses on the boy alone and constantly wearing a catatonic expression on his face. Atticus would have benefited with at least a hint of intensity but he remains emotionally stunted--his feelings flat lined before we even met him. No personality, no charm, just expressionless. Writer/Director Tom Gilroy could have turned the woods into its own character, engaging the scenes with color and excitement, but instead everything around stays bleak and humdrum. (Tom Hanks made the world weep when he once lost his best friend, a volleyball, so the possibilities in the wild wilderness are endless.)

Things get super weird when Atticus' fate introduces him to Carter. Living off the fat of the land, this hippie takes odd jobs and makes jewelry to sell to other hippies at hippie festivals. He's broke and knows there's a cash reward for turning in Atticus, yet he hangs out with him, sleeps next to him naked, and complains about being broke. I'm not certified in common sense, but I'm pretty sure hippies (who are constantly stoned) aren't idiots. The moment when the duo finds an abandoned dog at one the hippie festival and Carter asks the rhetorical question, "What is wrong with people?," I let out a gentle sigh.

As it chugs along, The Cold Lands never looks back at Atticus's mother's death. If the story gave the mother/son bond more time to breathe, or perhaps gave Carter a reasonable conscience, it would have been a much sharper picture. Instead, this narrative lands on a smug, gruff conclusion.

Do you feel this content is inappropriate or infringes upon your rights? Click here to report it, or see our DMCA policy.
Lili TaylorThe Cold LandsTom GilroySilas YelichMaggie LowDeb MonteithDrama