Review: TEENAGE Is A Fascinating Look At The Emergence Of A Cultural Norm 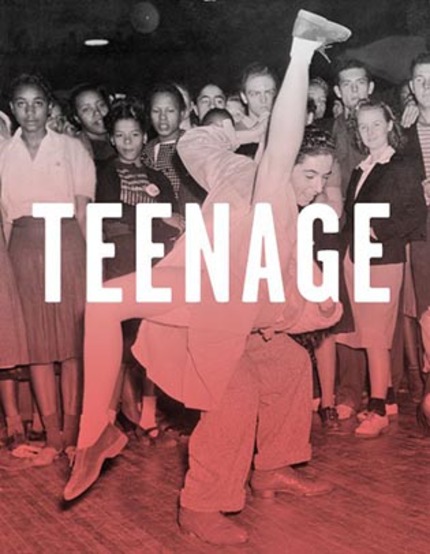 Who are these fickle lords of pop culture? Where did they come from? Though the awkward age has by now been institutionalized as a demographic concept with immense cultural power (see: Beiber, Demigod), "teenager" is a relatively new social concept that emerged during the war years of the early 20th century. The birth of the teenager as a political and cultural category is the subject of Matt Wolf's humanistic new documentary Teenage, and it's rare to see such an abstract concept presented in such a personal way.

Consisting completely of archival footage (and footage made to appear archival) overlaid with voiceovers from anonymous once-teens, the film is executed with a deft aesthetic sensibility that renders most of its attendant nostalgia palatable. Everyone by now is familiar with the "Ken Burns effect" - the slow pan or zoom into a still photo accompanied by music and narration - and Wolf uses this technique frequently to elicit a personal connection with faces and contexts long since passed. But while Burns inclines toward encyclopedic, multi-hour explications of cultural events and eras, Wolf's film tends toward minimalism and an impressionistic taste that serves his rather large and unwieldy subject matter well. He appears to have done an enormous amount of work digging up old footage, staying away from clichéd excerpts from Hollywood films wherever possible, and preferring to use home movies to create an aura of fragility and displacement around his young subjects. The result is a film that is much more about re-imagining a lost time than adapting a treatise, and it should play well to people of all ages.

"I want to leave my mark, not just a blank space" an unnamed narrator says in the opening sequence. If Teenage documents anything, it is this filling in of the gap between childhood and adult life. Their emergence was not a natural process- teenagers, we are informed, are "wartime inventions". The film centers around the time during and between the First and Second World Wars and presents the idea that adolescents started to become self-aware as a result of increased expectations from adults who needed them in their factories and wars. They came into being by rebelling, and by celebrating the rebels the film absolves the kids from complicity in any of the cynical politics that brought the world down around them. It's remarkable that Teenage can present footage of Nazi Youth seig-heiling with the same wistful tone it uses for the zoot suiters and swing kids.

The documentary begins by talking about hooligans in England, and then proceeds linearly through a sampling of forgotten teen cliques, dances and youth groups of Europe and America. It can be amusing to watch very young people with the mannerisms of your grandfather, and there's something interesting about watching Boy Scouts tie a knot with a hammy enthusiasm that would seem sarcastic today. Some groups - like the "Wandering Birds," a group of Germans who went naked through the woods in the 20's - are more interesting than others, but the film stays on point by consistently depicting teenagers as a reactive force in conflict with a society that had yet to acknowledge their needs. Towards the end of the film, a narrator reads aloud the "Teenage Bill of Rights" and the civil rights analogy becomes more overt. Thankfully, the film ends before we get to a stale rehashing of beat and hippy myths.

"This is a story that ends with a beginning" we are told, "the old world is over and a new figure has emerged." It's true: the teenagers we know now are decidedly different from the miniature adults spinning wildly to jazz and working in factories we see here - and Teenage is more about the birth of a powerful demographic concept than it is about real people. But Wolf and crew work hard to make the movie as personal as possible by exercising great taste organizing their material and selecting good music to accompany the often static shots. The result is a concise film that works on several levels.

Teenage will be opening in limited release from Oscilloscope Laboratories beginning March 14.

Do you feel this content is inappropriate or infringes upon your rights? Click here to report it, or see our DMCA policy.
DocumentaryOscilloscopeMatt WolfJon Savage (based on the book 'Teenage: The Creation of Youth Culture 1875-1945')Jon SavageJena MaloneBen WhishawJulia HummerJessie T. UsherHistory