Review: IN FEAR Takes A White-Knuckle Ride On A Dark Night 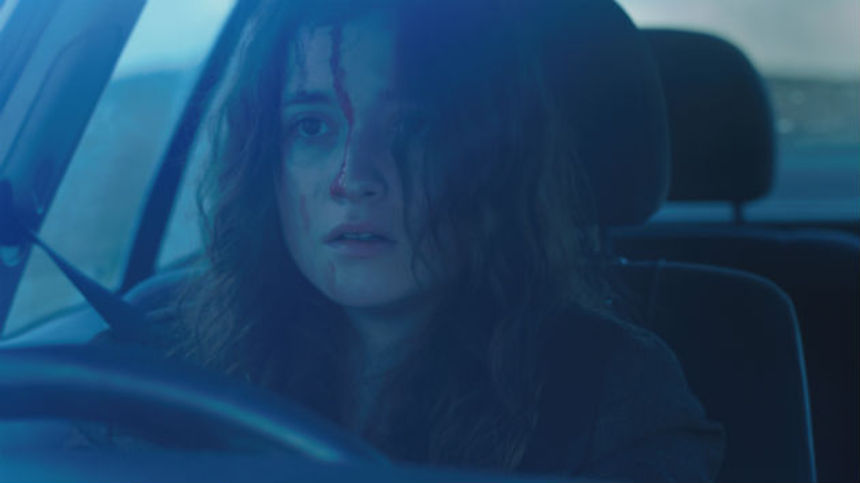 New couple Tom and Lucy are on their way to a music festival, to meet up with friends, camp, and explore their new relationship, when things go terribly awry.

In Fear opens with Lucy in the loo of a pub, while unseen to her, a leering eye stares through a peephole. As she and Tom leave to get on the road, Tom explains there was a slight altercation with a local due to a spilled drink, which he smoothed over with a couple of pints and an apology.

Soon Tom and Lucy are lost amidst a maze of overgrown, shrub-ridden back roads, misdirected by signs that have them going in circles, and gradually running out of gas. Let the games begin. In Fear then becomes an exercise in the cat-and-mouse/automotive terror sub-genre, as things become progressively worse, while we are trapped with Tom and Lucy in a confined space, shoved intimately into their paranoia and mounting questions of just who is out there fucking with their heads. Eventually Tom and Lucy stumble upon another person on the road, the injured Max, who claims to have had his own run in with the stalkers, and pleads with Tom and Lucy to "just get the hell out of here!" as he mucks up their back seat with blood from a nasty gash in his head. 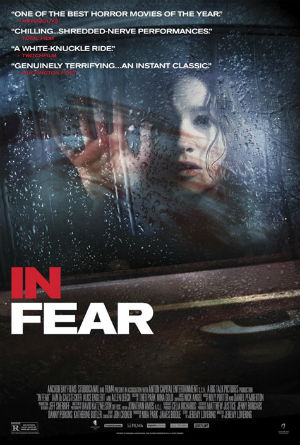 Of course, the tropes are all here, from the mysterious and foreboding shack in the woods, to the shadowy figure on the hill only one of them sees at first, to the mysterious and suspect stranger in the car. It's all really a set-up for director Jeremy Lovering to flex his directorial muscles, ratcheting up the tension and putting the emotional thumbscrews to the audience, which he does quite well.

Use of the minimalist sets and confined spaces are deftly handled, the repetitive 'round and 'round of the labyrinth of roads never becoming what I'll call a "Flintsone background" where you end up seeing the same damned tree over and over. It serves to increase the frustration and feeling of being trapped, rather than becoming a boring loop. The camera is continuously placed in interesting spaces. moving us the viewer voyeuristically around the car in an expert fashion. In Fear really shines in the sound design as well. Understated, subsonic, running like a quiet electrical current through the film, its buzz and thrum subtly amplifying the terror Tom and Lucy are experiencing.

Actors Iain De Caestecker (Tom), Alice Englert (Lucy), and Allan Leech (Max) all turn in believable performances, and director Lovering keeps things clipping along very nicely. These type of films, with obvious comparisons to Steven Spielberg's Duel, Pasquale Festa Campanile's Hitch Hike, and Jack Starrett's Race With The Devil, are really little more than lifeboat films. Put a few people in a confined space, terrify them into running, and let Pavlov do his proverbial thing. It's not about much else than tension control and letting the characters react. That said, it's a damned fun cruise with the right driver behind the wheel, and Lovering certainly knows how to step on the gas peddle.

In Fear is nothing amazingly groundbreaking as far as plot, but if you like a solid white-knuckle ride, you'll want to climb in.

Review originally published during the Sundance Film Festival in January 2013. The film opens in select theaters in the U.S. on Friday, March 7 ahead of its release on VOD, Blu-ray, and DVD on Tuesday, March 11.

Do you feel this content is inappropriate or infringes upon your rights? Click here to report it, or see our DMCA policy.
Alice EnglertBritish Cinemahorror cinemaIain De CaesteckerJeremy Lovering