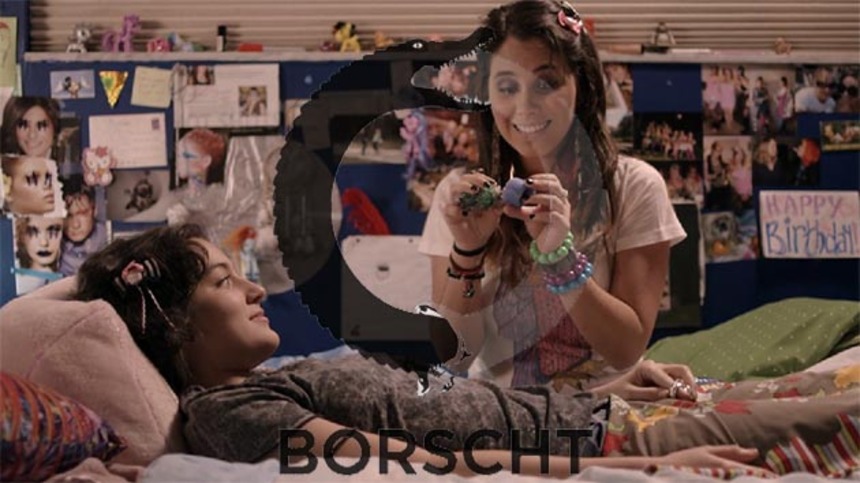 If you've been to film festival shorts program recently and found yourself watching some sort of weird, wonderful, and wacky short, there is a chance it was brought to you in part by the Borscht Corporation. Perhaps you caught Jillian Mayer & Lucas Leyva's #PostModem at Sundance, NYFF, SXSW, Dallas, Boston Underground, AFI Fest, or one of 30 other festivals it has played in the last year (full list). If not, we've got the full short musical odyssey for you down below. Go watch it!

A comedic satirical sci-fi pop-musical based on the theories of Ray Kurzweil and other futurists. It's the story of two Miami girls and how they deal with the technological singularity, as told through a series of cinematic tweets.

#PostModem is just one example of the short film/art projects that the Borscht Corp. (really more of an arts collective than a corporation) and their Borscht Film Festival have helped support. Now the Borscht Corp needs your help. The organization is competing for an arts grant that would let them expand their currently bi-annual festival to an annual festival . All you have to do is head over here and give them a click. But hurry, because voting closes tomorrow at midnight.

And if you aren't convinced...seriously just give #PostModem a watch. It's pretty brilliant (and slightly NSFW).

Do you feel this content is inappropriate or infringes upon your rights? Click here to report it, or see our DMCA policy.
ArtBorschtFilm FestivalsJillian MayerLucas LeyvaShort films