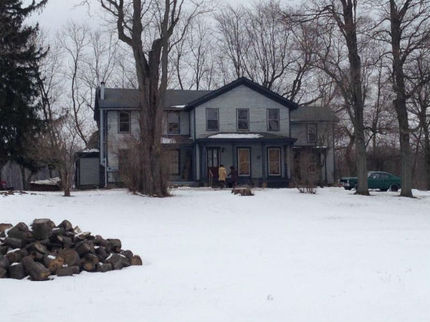 Any new ghost movie set in the 1970s automatically has my attention, especially when the people involved have good track records. Setting a movie in that time period removes the clutter and distraction of modern technology, which means the filmmakers must rely more fully on the strength of the story and characters to create a frightening atmosphere.

Such is the case in favor of We Are Still Here, which stars Barbara Crampton (Re-Animator) and Andrew Sensenig (The Last Exorcism Part II), as well as Lisa Marie and Larry Fessenden. Here's the official synopsis, which sounds like it will give a familiar premise a good, hard shove. :


After their teenage son is killed in a car crash, Paul (Sensenig) and Anne (Crampton) move to the quiet New England countryside to try to start a new life for themselves. But the grieving couple becomes the prey of a family of vengeful spirits that reside in their new home, and before long they discover that the seemingly peaceful town they've moved into is hiding a dark, terrifying dark secret. They must overcome their sorrow and fight back against both the living and the dead as the malicious ghosts threaten to pull their souls - and the soul of their lost son - into hell with them.

All in all, that's a good lineup both in front of and behind the camera, all in support of an intriguing premise that will, I hope, deliver good chills and thrills.

Do you feel this content is inappropriate or infringes upon your rights? Click here to report it, or see our DMCA policy.
Andrew SensenigBarbara CramptonLarry FessendenTed GeogheganTravis Stevens