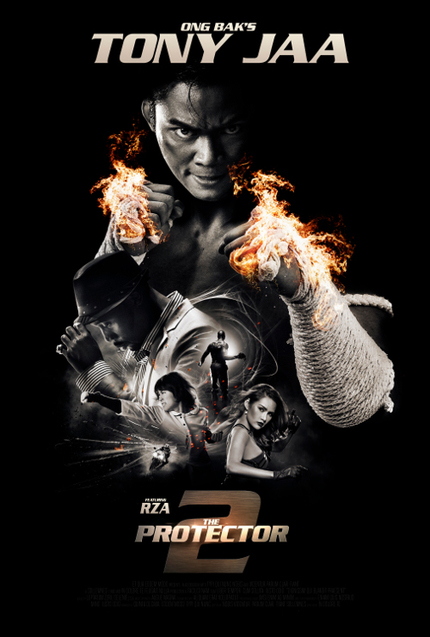 Tony Jaa is headed back to US shores with the impending release of The Protector 2 (aka Tom Yum Goong 2 aka TYG 2) on iTunes March 27th prior to a theatrical run starting May 2nd.And that can mean only one thing: A new trailer cut to feature as much of the film's minimal English language dialogue as possible. Plus people being punched.

Boss Suchart is the owner of an elephant camp. When he is murdered, all evidence points to Kham (Tony Jaa), who was seen with the victim before he died. Kham is forced to run as the police launch a pursuit. Meanwhile, the twin nieces of Boss Suchart (Jija Yanin Wismitanan and Teerada Kittisiriprasert) are out for revenge. But luck is on Kham's side when he runs into Sergeant Mark (Mum Jokmok), an agent sent to Thailand on a secret mission. In another twist, Kham is drawn into an underground fighting ring run by LC (RZA), a crime lord who's obsessed with collecting top-class martial artists. LC's fighters are branded by numbers, such as the lethal, beautiful Twenty (Ratha Pho-ngam) and the diabolical No. 2 (Marrese Crump). These fighters are ordered to capture Kham for a special mission.

Do you feel this content is inappropriate or infringes upon your rights? Click here to report it, or see our DMCA policy.
the protector 2tom yum goong 2tony jaatrailertyg 2