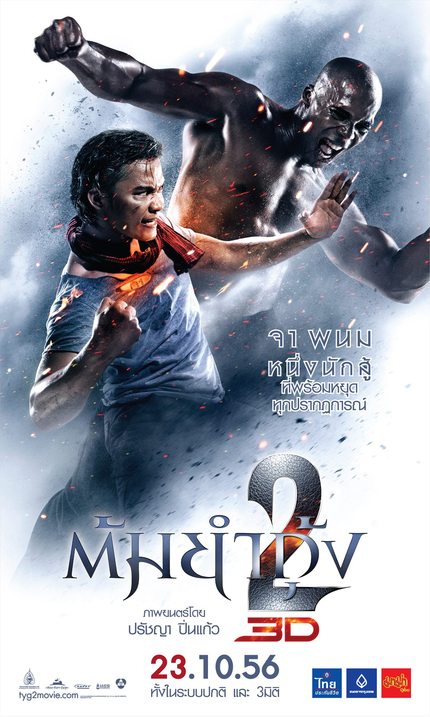 How did director Prachya Pinkaew up the ante in Tom Yum Goong 2 after Tony Jaa had to evade a gang of BMX riders at an abandoned warehouse in the last installment? How about evading a gang of motorcyclists on top of a building and throw in some in-your-face 3D effects for good measure.

Kham (Tony Jaa) has become the suspect in the murder of Suchart- the influential owner of an elephant camp, who was killed by three punches to the dead spots by a martial arts expert, and Kham (Tony Jaa) was the last one seen at crime scene. He needed to run away from the authorities and the hunt by Suchart's twin nieces (Jija Yanin and Teerada Kittisiriprasert) Luckily, he was helped by Sgt. Mark (Petchtai Wongkamlao) the Interpol who was sent from Sydney to handle some secret mission.

Kham keeps on running while trying to find Khon, the elephant whom he loves like his own brother who was kidnapped a few days ago. The longer he runs, he more he gets involved in a secret organization led by LZ the big boss who is very passionate in collecting fighters from all over the world into his secret stable. His fighters like Twenty (Ratha Pho-ngarm) and Number Two (Maritz) intend to grab Kham to satisfy their boss' objectives.

Be prepared for the extreme fights by Tony Jaa with various action disciplines, all death defying and the risky fight scenes designed by the Thai action movie which the whole world is waiting to see in 3D shooting platform.