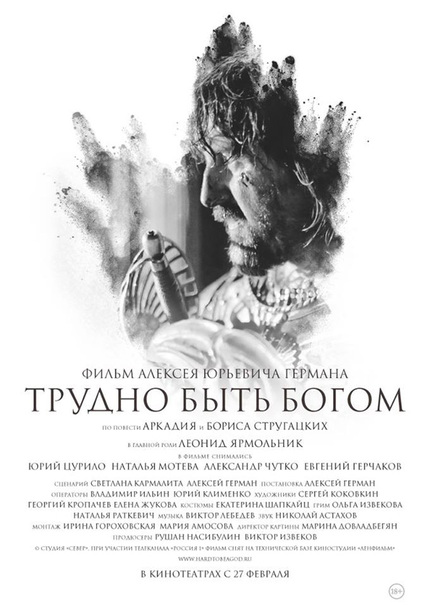 Aleksei Yuryevich German's Hard To Be A God feels like an artefact from another time, a striking black and white exercise seemingly dropped from another world. Which is appropriate, really, given that it's about life on another world. Based on a novel by the Strugatsky Brothers - also responsible for the source material behind Tarkovsky's Stalker - German's final film premiered posthumously this year in Rotterdam, where they described it like this:

The planet Arkanar looks like a medieval hell ruled by totalitarian evil. A messenger from Earth has a mission to introduce humanitarian ideas, unaware that they don't always work. A stunning black-and-white fresco of a world that lost its chance to be saved. A farewell from one of the greatest Russian filmmakers.

Alexei German, who died in 2013, was always a fierce critic of authority. In his last film, he looks into the ultimate hierarchy: that of God and man. On the planet Arkanar, which halted its development in the Middle Ages, there are 30 terrestrial scientists. Don Rumata and his colleagues observe Arkanar with the knowledge of everything that could happen, but they cannot intervene. They are helpless gods in a world in which intellectuals are hunted like game.

The Russian theatrical trailer for this one is freshly arrived online and it's an experience. Take a look below.