Review: GET MARRIED IF YOU CAN (CÁSESE QUIEN PUEDA), An Irritating Rom-Com Starring Martha Higareda 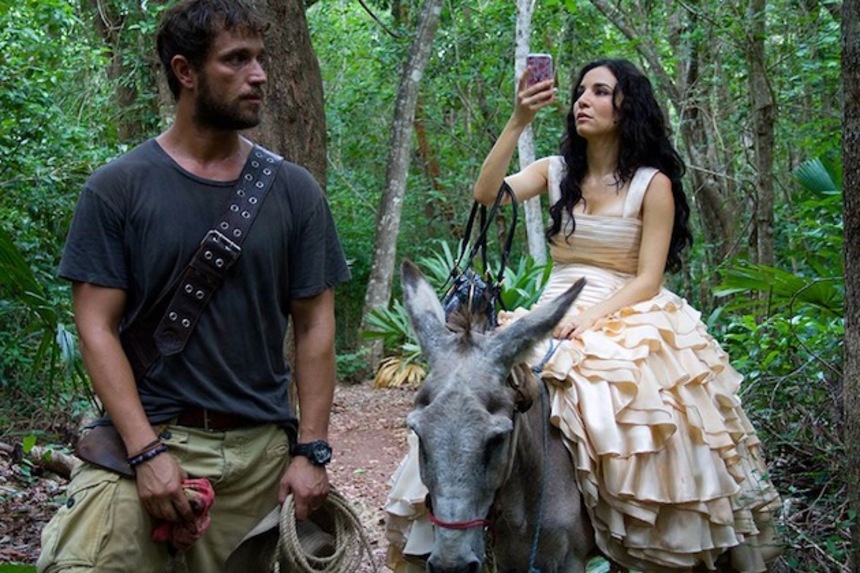 Famous Mexican actress Martha Higadera (Amar Te Duele) decided to write a romantic comedy for a Valentine's Day release, and now it is a reality called Get Married If You Can (Cásese Quien Pueda), directed by first-timer Marco Polo Constandse and starring Higareda herself. The movie works from a very basic premise and uses the rom-com formula to an annoying result.

The story is about Ana (Higareda), a young spoiled woman who finds out that her fiancé cheated on her just before their weeding. To the surprise of Daniela (Ana's sister, played by Higareda's real-life sis Miri) and Gustavo (Nosotros Los Nobles' Luis Gerardo Méndez), Ana still wants to get married with the cheating dude because she can't see beyond her nice, superficial life. On the other hand, Daniela has been secretly in love with Gustavo since they were kids and now... well, you now already what's going to happen, right?

The first problem of the movie is definitely the tone. This features the most irritating humor I have seen in a while, with Higareda overacting and the rest of the cast cursing over and over again. That's one of the biggest, omnipresent jokes here: people swearing. The most decent bits of comedy come from veteran actor Fernando Luján as Gustavo's father -- this character desperately wants a grandchild -- but these are a couple of jokes lost in the middle of the deadly desert.

At some point, everything changes to become a sappy lesson about love that obviously goes for the "always follow your heart" type of message. Picture this: piano music begins playing softly while Higareda's Ana is told that "marriage is a serious thing" by the handsome and sensitive fellow who appears surprisingly to become the perceptible perfect partner for the protagonist.

It is valid to dig the most escapist kind of rom-com, but Get Married If You Can is, quite simply, a bad movie with plot holes and decisions that make little to no sense (not to mention unfunny). Well, to be fair, is very easy to understand everything once we recall that "the answer is ALWAYS money", as Todd Harrington's article remarks. This flick is a perfect example of money choices executed without any concern for the story itself.

It is a big commercial for the Mexican state of Quintana Roo and that is not a secret, as Higareda is proud of their goal of promoting the state's tourism. What everybody forgot was to give some logic to the movie. Things begin in Mexico City and when is time to go to the paradisiacal state, the motives are laughable.

Ana, disappointed by her fiancé, gets drunk and goes out one night, eventually crashing a wedding where she sings -- the film has a couple of musical moments -- and surprises everybody. Later, she ends somehow in the back of a truck that moves from the city to a jungle in Quintana Roo. And that's it. There's room for the aforementioned commercial and even for some others, like one paid by a Mexican airline and done lacking a single hint of creativity.

Get Married If You Can is a weird comedy set in the jungle, with the typical situation of the rich girl from the city who wants to eat some roast chicken (actual joke) and remain clean. The humor continues to be simplistic there, between Higareda and Michel Brown, the Argentinean actor who portrays a doctor who saves Ana, literally and figuratively. The director Constandse adds nothing to the two formulaic subplots that have both sisters reaching a happy finale, but not without solving some conflicts before. Mexican cinema couldn't be more mediocre than this, indeed.

Get Married If You Can opens in Mexico on Friday, February 14.

Do you feel this content is inappropriate or infringes upon your rights? Click here to report it, or see our DMCA policy.
Casese Quien PuedaGet Married If You CanMartha HigaredaMexican Cinema

More about Get Married If You Can