Berlinale 2014 Review: Grand and Hypnotic, A DREAM OF IRON Won't Soon Be Forgotten 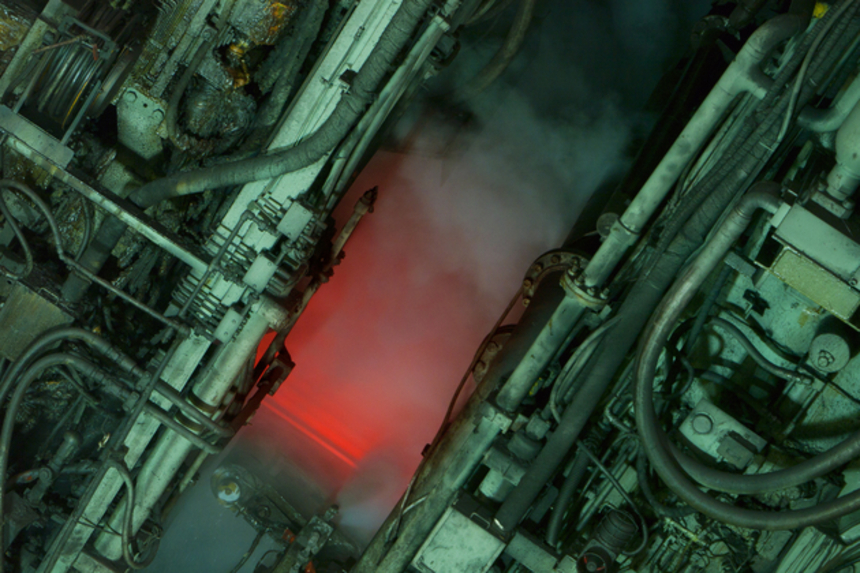 Early on in A Dream of Iron, a new documentary premiering at the Berlin International Film Festival this year, director Kelvin Kyung Kun Park shows us images a whales moving through the vast blue expanse of the ocean - enormous creatures that were once considered grand and mysterious. Soon after, Park brings us to the expansive POSCO steel-making plant on the coast of Southern Korea and proceeds to show us the process of shipbuilding through a series of arresting visual tableaux. Gargantuan in size, these vessels demonstrate the soaring ambition of the human race, as enormous components are each readied for assembly with minuscule laborers dotting their surface.

In a brave new world with seemingly limitless access to information, it takes a lot to stimulate our awe. Hyperbolic titles in the viral digital landscape may tempt us into thinking they hold the key to new wonders but by dint of out credulity, we are often led to disappointment. In an information age with few locked doors, there is little left to amaze us. Yet, rather than seeking out something new, director Park points his keen eye towards something that's been around for decades but is no longer in lockstep with our technological fancies.

Before leading us into the cavernous expanses of POSCO, Park narrates over the backdrop of a Buddhist ceremony before showing us ancient cave etchings. These old drawings cast whales as mythical beasts, perceived as gods in the eyes of those that drew them. Further images show us Korea as it enters the modern age and experiences its stunning economical development. One of the crowning achievements of this period was POSCO, the Pohang Iron and Steel Company that was founded in 1968 during the Park Chung-hee administration. The fourth largest of its kind in the world, this company constructs ships that stretch far beyond the imagination of the peninsula's ancient cave dwellers.

With its dark shadows and molten glow, the interior of POSCO is oddly reminiscent of the most recent Hobbit film but, being real and demonstrating greater ingenuity, it is all the more impressive. This factory was one of the drivers that fueled Korea's rapid growth, itself represented in the film by earlier shots of the country's many uniform residential blocks littering cityscapes. Park's carefully composed images, accompanied by a waltzing tune, are both magnificent and disquieting.

The music adds a droll touch the visuals and Park's satirical bent pops up a number of times over the course of the documentary, including in the next scene where workers march through a street crossing of the massive complex, which at this point seems like a small town, except with almost exclusively male and uniformly garbed residents. This shot unfolds as what seems to be an old Korean morning exercise song plays in the background, which it sounds more like a socialist ballad. Though a bastion of Korea's staunchly anti-communist government, by juxtaposing a few choice morsels of music against images of the plant, Park's vision of POSCO has more than a little in common with Soviet Russia.

As things move out into the shipyard, the scale becomes larger and the tableaux more intricate. At this point the music also switches to the hypnotic chanting of Buddhist monks. Combined, the effect is awe-inspiring and terrifying in equal measure. The compositions are themselves filled with different kinds of artists, as workers toil away on the large panels and parts, turning the images into living tableaux, evolving and repeating over time.

With some of the best photography you're likely to see in any film this year, let alone a documentary, Park's masterful A Dream of Iron is a confident and immersive non-fiction work that teaches and inspires us through catharsis rather than fact.

Do you feel this content is inappropriate or infringes upon your rights? Click here to report it, or see our DMCA policy.
2014a dream of ironberlin film festivalberlinaledocumentarykoreakorean filmpohangposco박경근철의 꿈