Sundance 2014 Review: THE DISOBEDIENT Is A Marvelously Absurdist Abstraction Of Young Adulthood 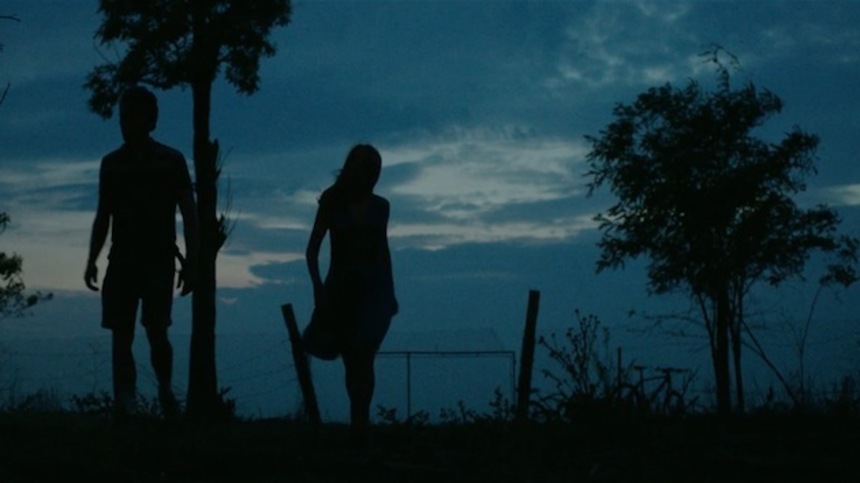 About half way into Serbian director Mina Djukic's feature debut, our heroes, Leni and Lazar (childhood loves reunited) get caught in a rather curious rain shower. As if by magic conjured by the cinematic gods themselves, the sunny summer fields are caught off guard, awash, leaving the bicycling pair soaked to the bone in mere seconds. It's a moment that could only happen as such in the movies. As is what comes next...

Abandoning their bikes outside a provincial community hall, the old friends run inside screaming. They kiss the wedding portrait propped at the door, snag a handful of balloons, pop them, and grab any clothes they can from coat check, and with great gusto and abandon, crash the wedding. As they prance around the hall, cinematographer Dorde Arambasic's camera glides through the crowd, catching moments of absurd debauchery, fright, delight and more mayhem, before settling on a sharp looking older man in spectacles and a boy tie. Lazar runs past with a cooked chicken on a stick. The older man smiles wryly and looks straight into camera. We have come to know this fellow as our narrator, and merely for our own amusement, or perhaps his, he's ready to throw a wrench into Leni and Lazar's narrative.

And so here Djukic calls for a rebellion against formula, against expectation, embracing the youthful spirit of her twenty-something protagonists in all their naivete and fear. Her aesthetic is of a romantic cinema, visually lyrical and playful, if then slightly debauched as if to go against the romantic altogether. What we have here feels as fresh and vital as such early Milos Forman films as the poetic Loves Of A Blonde, or Věra Chytilová's rambunctious anti-statement statement Daisies.

And yet, as a filmmaker Djukic, knows how to craft the tender and quiet moments too. Ones full of vulnerability and angst.  Before Leni begins her bicycle trip with her childhood love, she's in the bathroom of her family's pharmacy, clutching the drapes at the window like a shawl. A pregnancy test sits on the sill. The wind caresses the drapes and her hair. She weeps.

If we are to expect anything from The Disobedient it is the celebration of youth, and the understanding that we should cherish it while we can, for it won't always be the same. Leni and Lazar cling to their childhoods ferociously, but they keep bouncing off each other into opposite directions. At Lazar's father's funeral dinner, where the pair first encounter each other as adults, they have a soup eating contest. When Lazar comes to the pharmacy window, they play a slap bet game with their hands, leaving Leni to spit on the glass in anger. Lazar then kisses the glass. Time and time again, Leni tries on the imaginary language they spoke in as kids, whispering magic into her hands and blowing it out onto the wind for Lazar to hear. But Lazar doesn't hear. As the pair bike down the country roads, encountering fireworks making lunkheads, orphan boys and a day of the dead festival, they bicker and fight, hold each other close, hoping against hope that they are ready to be together again as adults.

Two children lie amongst the ivy and headstones in a graveyard. They laugh and whisper in their imaginary language. Our narrator peeks out from around a corner, nods his head and smirks. Leni wanders a crypt, the sun draping an otherwise morbid place in a soft golden light. She pats the etchings on the headstones gently, as if to say "there, there." Lazar stands upright in an alcove, as if a statue. As if dead. Leni is astonished. She begins to pee. It is inexplicable and yet we know. Somewhere in our bodies, these organic artifices, vessels, we know.

And that's how much of The Disobedient goes. For those who willingly embrace its absurdist overtones and carefree, sing-song structure, one will find delight and heartache, both a grand and intimate sweep that chronicles the time between adolescence and adulthood with magic and charm. One will contemplate love... lost, reclaimed, and misunderstood. At a 109 minutes it may spin its wheels for a little too long, but no doubt Djukic is a fresh and exciting talent that I for one can't wait to see more from.