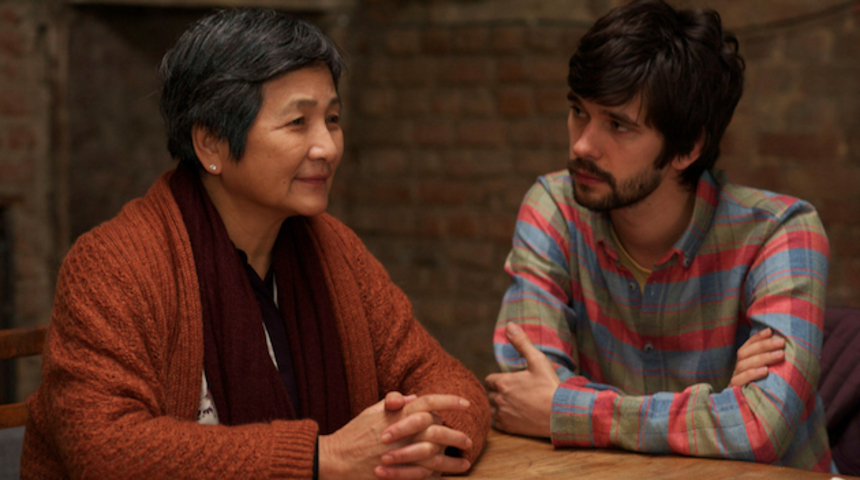 A quiet room, muted colors, old wallpaper from a bygone era. A hushed winter light drapes itself across the space. An elderly mother looks at her adult son and asks, "What's wrong?" The son insists nothing is, and he'd like to invite her over for dinner. A young woman, a nursing assistant, comes in to put a new light bulb in the lamp. The mother is caught off guard, her son, lying on the bed a moment ago, is gone. He is dead. He has been dead.

These are the opening moments of Hong Khaou's debut feature, a film that struggles to find a cohesive through line, while offering up some beautifully tranquil and melancholic imagery.

The mother is Jun, a Cambodian Chinese born woman who has lived in England for decades. She does not speak English. Her son, Kai, recently passed in an accident. His boyfriend Richard makes an effort to visit Jun, to connect with the increasingly isolated woman. She does not know they were together. In an attempt to help Jun, Richard hires a translator to "talk for" Jun and her new boyfriend Alan.

What's striking in possibility about Liliting is it willingness to tackle, equally and subtly, the complexities of cultural, generational and language barriers. In execution it is only sparingly successful at this. The nature of translating, the awkwardness of it, the ability to hide truth or cut it out entirely or to become far, far too truthful, and thus hurtful, is a fascinating space to consider, but much of the film feels far too inert to be truly engaging. Yes, grief has a way of slowing things down, but these interactions only gain so much ground in signifying the characters' troubles and who they desire or don't desire to be towards each other.

While much could be said of Ben Whishaw and Chinese acting legend Pei-Pei Cheng's sorrowful performances, it is Hong's dialog and structure that time and time again falls flat, undermining the lead's efforts. This is especially inherent in the interactions between Kai and Richard, there romance feeling like a mockery or cartoon more than a loving and believable relationship. This is far more unfortunate than anything because when the movie keeps quiet and focuses merely on the image, a true sense of sadness and longing brushes through the frame, leaving us with several aesthetically beautiful passages. A favorite is a shot that turns around Jun's room 360 degrees in seemingly real time. We first see Richard dancing alone, then Richard dancing with the translator, Jun and Alan dancing, Kai and Jun dancing, and finally Richard and Kai embracing. In the context of the larger scene it is framed around -- essentially our climax where Richard and Jun come to terms with each other and Kai's death -- it seemingly feels like a lovely way to illustrate a celebration and an acceptance of these characters. But it remains somehow emotionally separate, and thus unimportant to their closure.

Emotions linger in the images of Lilting, almost acting like a ghost of poem, but that kind of half-life content is also inherent to its ultimately underwhelming whole.

Do you feel this content is inappropriate or infringes upon your rights? Click here to report it, or see our DMCA policy.
ben whishwahong khaouliltingpei-pei chengsundance