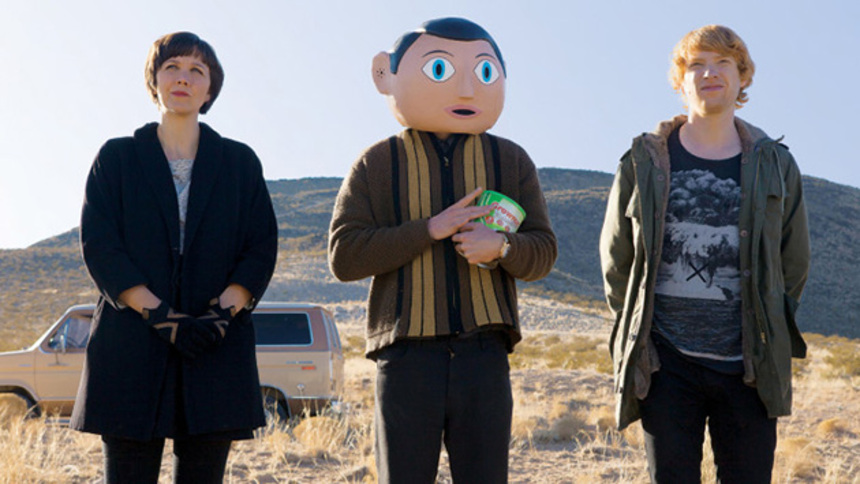 All the ingredients are her for me to adore Frank. You've got a quirky premise surrounding a bunch of musical fun, a standout performance by one of the world's best actors, a mix of the somber and the slapstick all coming together with a bunch of memorable one-liners.

Yet for all its pieces, I'm not sure Frank adds up to what it could have been. It comes close enough to being a masterpiece that it's a bit frustrating, its ending just a bit too contrived, as if it ran out of steam.

Along the way, however, there's a hell of a lot to admire. We're introduced to Jon, played by Domhnall Gleeson with a terrific manic air. He's coming up with tunes on the spot, crafting jingle-like snippits about his surroundings. He soon finds himself sucked in to the orbit of Frank, leader of an avant-garde, outsider-rock band populated by Euro Trash and a sulky Maggie Gyllenhall on Moog and Theremin. They caterwaul their way into crafting a record, slowly bonding as their fame grows via surreptitious web posts by Jon showing the travails of their creation.

Mind you, the simplest way of talking about this movie is that it's the one where Michael Fassbender wears a giant papier mâché mask on his head.

The music and story line draws from many actual tragi-rock tales, from Syd Barret to Nick Drake, all the way through to Captain Beefheart and Peter Gabriel's "Slipperman" suit that he used in the early 70's Genesis shows. The most overt references may be to two other Franks - one named Zappa, who also conducted a ragtag bunch of musicians with "no commerical potential" (as one record executive described his music), and Frank Sidebottom, the stage persona of Brit Christopher Sievey who would perform with a giant head not dissimilar to the one used in this film.

Naturally, the giant head is a metaphor for Frank being distanced from those around him, and the film does a nice job at allowing these moments of arch comedy and bitter despair to intermingle. The farce goes a long way to keep things from being dreary, but when the band heads to Austin it all seems to get just a bit too formulaic, losing some of its charm.

Still, there's much to admire, and I do believe that Gyllenhall's shrewing affectation, while kind of annoying to sit through, is entirely keeping with the intentions of the filmmakers. Even without facial expressions Fassbender commands his scenes, and the rest of the supporting cast does an admirable job at maintaining the balance of tone.

Even the music is pretty great, a nice blend of ennui-pop with noodly Eno-izing, sung in a throaty Jim Morrison moan. There are a few moments that even reference The Big Lebowski, oddly, though they seem a bit forced.

In the end, the film feels like a bit of a mashup, a mix of genres and tunes and tones that don't quite mesh, but nonetheless as experimentation is far from uninteresting. The ingredients are there for this to be great, and the fact that it's just decent is perhaps more frustrating than anything. Still, even if Frank doesn't quite reach the heights set up by its early moments, it's still a ride worth taking, and there's plenty of fun to be had along the way.

Do you feel this content is inappropriate or infringes upon your rights? Click here to report it, or see our DMCA policy.
Domhnall Gleesonfrankmaggie Gyllenhallmichael fassbenderSundance 2014