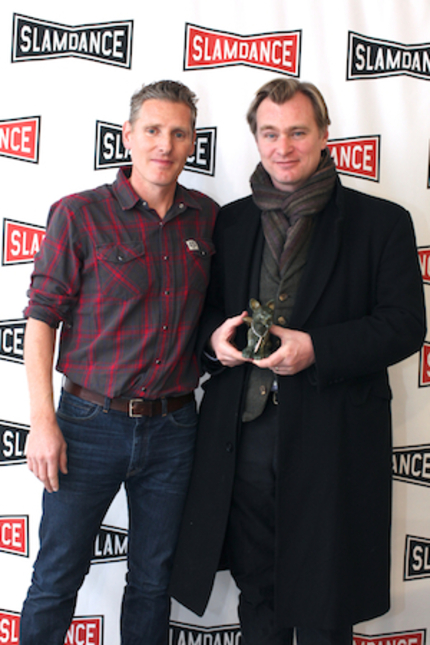 Park City, Utah -- Saturday night. There was something in the air. The crowd of filmmakers, programmers and press that had gathered in the main screening room of the Treasure Mountain Inn knew it. The air just... crackled. And then... A hush fell over the crowd, and then a cheer, as Slamdance co-founder and president Peter Baxter presented filmmaker Christopher Nolan with the first Founder's Award. It may be hard to believe, but The Dark Knight director's first feature Following played at Slamdance back in 1999.

The attentive audience then engaged with Nolan for a 20 minute discussion on cinema and his career. The soft spoken and humble director spoke of his wife and producer Emma Thomas, and how they've grown up together, his fond memories of Slamdance and Park City 15 years ago plastering home made posters around Main Street, and how each film, no matter how big the budget is its own battle, its own unique experience. A small kernel of his genius and generosity came with his suggestion that each project be an incremental step up from the last.

Though his time was short, Nolan clearly left a strong impression on the crowd, letting the group of first-time feature directors know they should cherish this experience, and that it's a good start. He left on these words of wisdom: "What Slamdance teaches you is that while it's wonderful to have a great community of filmmakers around you, you have to be prepared to do everything yourself. That's something that never goes away...you have to be prepared to carry the flag for the film because if you're not, nobody else is going to bother. The tricky thing is, it can seem like arrogance because it's the film you made, but there's no way around it. You just have to do it."
Tweet Post Submit