Review: THE TRUTH ABOUT EMANUEL Floats To The Surface 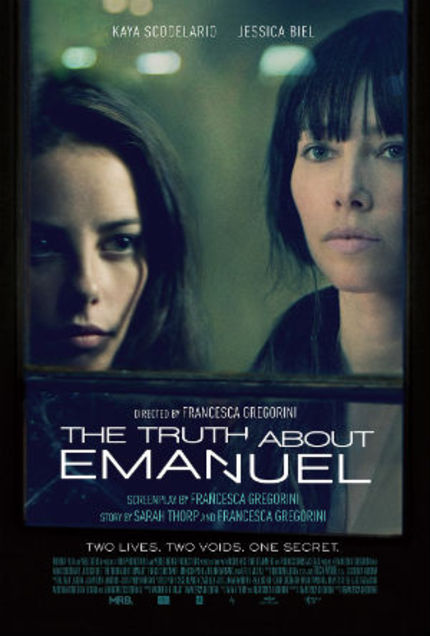 The sophomore film by writer/director Francesca Gregorini, following 2009's Tanner Hall, revolves around Emanuel (Kaya Scodelario), a precocious high school girl who carries on her shoulders the self-placed burden of her mother's childbirth death. For Emanuel, life is a struggle to find herself, despite feeling like she doesn't belong due to her unjust welcome into life.

As Emanuel's world view gets darker and more melancholic, a mysterious woman named Linda (Jessica Biel) moves in next door. She is a single mother who needs help with her baby, and she and Emanuel quickly become close -- almost mother/daughter close. This worries Emanuel's father, Dennis (Alfred Molina) and Janice (Frances O'Connor); Emanuel's trying-too-hard step-mom. However, as the story unfolds, the relationship between Emanuel and Linda grows and changes in unexpected ways, propelling the other characters on their own journeys of deciphering just what exactly is going on with these two seemingly unhinged women.

The Truth About Emanuel is unique. It tells a story unlike anything I've seen on the screen before, and does so with great skill and subtle dexterity. The script is tight and well structured, allowing the viewer to focus on the emotional journey of Emanuel and Linda despite the uncommon and challenging subject matter. The pacing keeps the story moving and the intrigue high without feeling rushed or contrived. Certain moments breathe, giving the viewer time to reflect on the complex machinations that are turning in the characters' heads. Other moments are frantic and startling, forcing the viewer to take notice. Just as importantly, comedic moments peppered throughout keep the film from feeling too heavy or from taking itself too seriously.

The characters are complicated and deeply nuanced. Every performance in this film feels raw, real, and true. Scodelario and Biel have a chemistry that is palpable, and the relationship between Molina and Scodelario feels natural -- like they have been a real family for the last 17 years. It's the type of movie that slyly makes you fall in love with each and every character, even if they act bratty or angsty or down right insane. Because of the nature of the story, one might start out laughing at these characters, but by the end, you are not only laughing WITH them, you are crying alongside them as well.

The most important point to be made about this film is that it achieves the incredibly rare and challenging feat of ingraining the perspective of the characters so deeply into the mind that everything about them becomes familiar. At the outset, I wouldn't have expected to relate to, and to fully understand, these two deeply troubled women. However, by the time the film was over, I felt like I knew them intimately and I understood the building blocks of their specific kinds of crazy. So much so, in fact, that by the end of the film, these characters struck me as maybe not seeming so crazy after all.

Review originally published during the Sundance Film Festival in January 2013, under the title Emanuel and the Truth About Fishes. The film is currently available to watch via various Video On Demand platforms. It opens in limited theatrical release in the U.S. on Friday, January 10. Visit the official site for more information.

The Truth About Emanuel