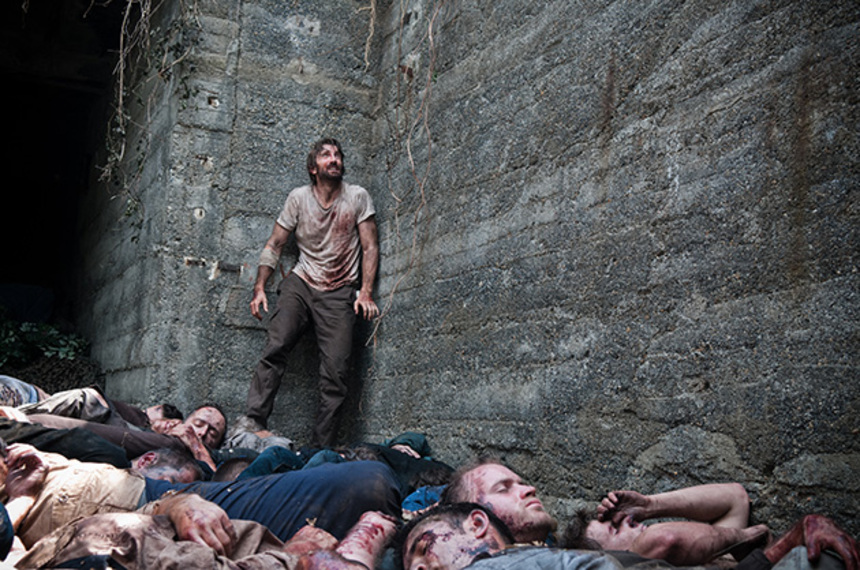 Sharlto Copely is the secret weapon of the amnesia thriller Open Grave. The District 9 actor easily flits between monster, savior, and victim in a role that demands that he  not know whether he's any of the above. His work here is strong enough that it allows some of the deficits of Open Grave to slide.

Copely's a John Doe who wakes up in a pit of dead bodies, bloodied, alone, and with no memory of his identity or how he got there. Making his way to a nearby cabin, he discovers other survivors who've found scraps of their identity, but still don't know what they were doing out in the middle of the woods or if they can trust this armed newcomer.

Working from a script from Eddie and Chris Borey, director Gonzalo López-Gallego constructs a mystery that feels like Simon Brand's Unknown in an Outbreak scenario. The connection between this motley collection of men and women (including Josie Ho, Thomas Kretschmann, and Erin Richards) is intriguing but undone somewhat by the decision to keep many of the performances cranked at a disaster movie 11.

Nowhere is this most evident than with genre vet Kretchsmann's character Lukas, whose overactive fight or flight response keeps him butting heads with John for much of their time together onscreen. Rather than ratcheting up the tension, it's exhausting - since we know so little about these characters, the conflicts lack weight. Why do we care what happens to one overly aggressive guy we just met if he keeps acting like a paranoid psychopath? Josie Ho, playing a nameless mute who doesn't understand English is similarly misused, forced to pantomime wildly for a group of strangers who mostly ignore what are clearly warnings from someone who's been to this rodeo before.

At the center of it all is Copely, whose character doesn't know if he's the villain or the hero in his own story, and treads a fine line trying to figure it out. How the actor keeps the film afloat is in giving John a hint of danger but hope that he's a good guy - most of us want to be the hero, and John is no different, even if he's convinced that he might have done something horrible to these people to put them in this situation. That's a smart and very human take on the character, complemented by John's interactions with the sensitive Nathan (Joseph Morgan) and the possible-maybe love interest Sharon (Erin Richards), each bringing out John's better angels (even as he's convinced they don't exist).

When the back two-thirds of the film turn into - well, not a zombie movie - where interest should start flagging, Open Grave keeps things lively thanks to clear indications that the crazies out to get our survivors aren't the walking dead. We get hints that they operate by a certain set of rules; for instance, why does a strung-up corpse stop a group of these unnamed infected later in the film - it's an intriguing question, but the how and the why of the infection are sideshows and aren't really the mysteries in which Open Grave is interested.

If you can roll with the everyone-yelling-at-everyone-in-crisis trope, there are some strong performances and an intriguing mystery at the heart of Open Grave. Whether you're on board with the final resolution of the mystery remains to be seen (it's got some problems - why not just keep notes in their pockets, for one), but it's a mystery well worth checking out.

Do you feel this content is inappropriate or infringes upon your rights? Click here to report it, or see our DMCA policy.
Erin RichardsGonzalo López-GallegoJoseph MorganJosie HoMax WrottesleyOpen GraveSharlto CopelyThomas Kretschmann