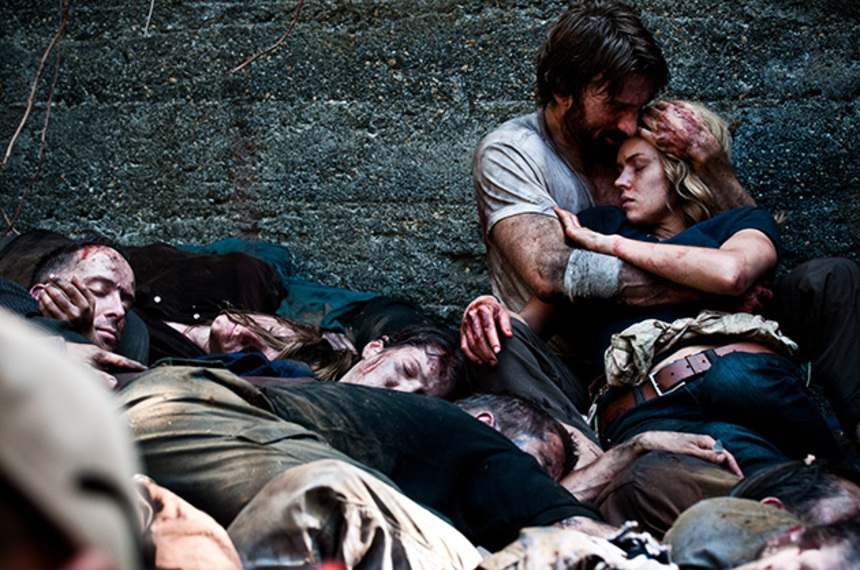 "We know who we are because of the people who we have around, or because of our memories. We all want to be good, but we have good things or wrongs things we do that we aren't happy with."

That's director Gonzalo López-Gallego on the hook of Open Grave, his horror thriller opening in limited theatrical release this week from Tribeca Films. In it, Sharlto Copely plays "John," a man who wakes in a pit of dead bodies with no memory of how he got there or even who he is. When he encounters the film's likewise afflicted ensemble of characters, John and the others must piece together what happened and why some of the locals are going homicidal.

López-Gallego says he loved the Blacklist-ranking script by screenwriters Chris and Eddie Borey, in part because of the central amnesia mystery, but it was the focus on its characters - specifically, characters who don't really now what their character is - that drew him in.

But it was his work on another thriller, 2007's El rey de la montana (King of the Hill), which attracted producers to his vision of the movie. "[The producers] saw my movie King of the Hill at the Toronto Film Festival back in 2010. So they liked my movie a lot, and they wanted to have a similar approach, or at least an emotional approach similar to what I did with The King of the Hill."

When he was approached to direct the film, he opted to pitch a take on the material which would focus on the emotionally-complicated, character-based center of the script and the madness of the characters. "They have nothing to grab on[to], nothing to compare with. John at the very beginning is completely naked of emotions and no memories of who he is, so he has to start from zero. Then you confirm that character with a strong lack of memory in a strange situation where horrible things are happening, and you mix it with other characters in the same situation and he's going to ask himself whether he's the bad guy or not."

Open Grave is the second English-language film from López-Gallego, behind last year's found footage astronaut horror movie, Apollo 18. In spite of the gulf between their concepts, both films are character-focused, smaller thrillers focused on a volatile collection of personalities.

With Open Grave, this focus on character allowed López-Gallego to background some of the genre elements and allow personalities of his ensemble to unfold, while creating a kind of "beautiful hell" for the to occupy. That's not to say the director retreated from the genre elements of the material - quite the opposite: "I like horror movies, but I'm always looking for more. I want to ask myself things and I want to be surprised."

And he wanted to say something about his characters, going so far as to hand out extensive bios to the cast prior to filming. The cast talked about their character's lives, developing a history for them before the event which would ultimately find them in a cabin, without memory, and surrounded by killers.

When asked if any of the performers balked at coming into their roles with much of the detail informed by the writer rather than their choices, López-Gallego is quick to point out that he left his cast the latitude to find their characters onscreen. 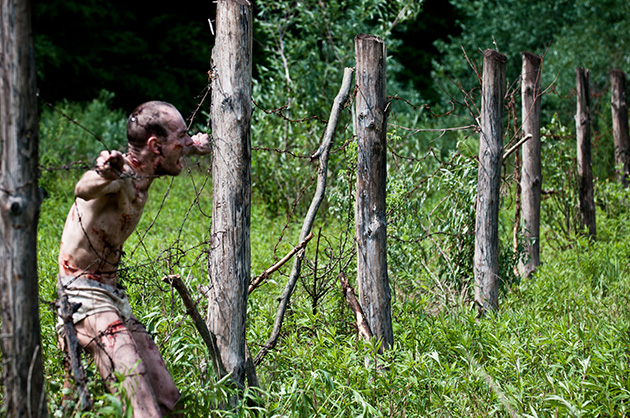 "I really had a great time with all of my actors. And I like to spend all of my time working with the characters. I tried to do a different approach for each of [the actors]." Gonzalo López-Gallego talked about finding the character of John, a man who he describes as having done enough bad things that others around him think he might potentially be a killer responsible for their situation, and working with actor Sharlto Copely to find that moral center for someone who doesn't even know their own name.

"In the case of Sharlto Copely, he's really intense and loves to work a lot, and he always has ideas for his character - he's really generous and always offering you different things. So we have a really collaborative way of working, even with the script. Then Thomas Kretschmann has a great deal of experience with 70 movies or more and he understands what he wants to do right away."

Citing the works of David Lynch as well as The Shining, he says he wanted to immerse viewers in John's world alongside the other characters, rather than let it be a passive experience. "I wanted to create a world that was allowing me to confront beauty with horror - I wanted to create horror themes in daylight. I was really obsessed with finding beautiful places, and wanted to shoot at springtime to really then create horrible situations like the guy in the barbed-wire fence."

Would López-Gallego return to the world of Open Grave if he were offered a sequel? The finale leaves the fate of the survivors in doubt, opening up the scope of what happened to John and the other characters to an almost apocalyptic degree. "I would want to know more about what happened. I love these characters, I love movies, and above all I love to experiment. So why not? I'm just sure I wouldn't call it Open Grave 2."

Open Grave is available now on iTunes and On Demand services; it will be in select theaters on January 3rd from Tribeca Films.

Do you feel this content is inappropriate or infringes upon your rights? Click here to report it, or see our DMCA policy.
Gonzalo López-GallegoOpen GraveSharlto Copely