Review: I, FRANKENSTEIN Makes An Apocalyptic Battle Look Like a Rainbow of Fireworks 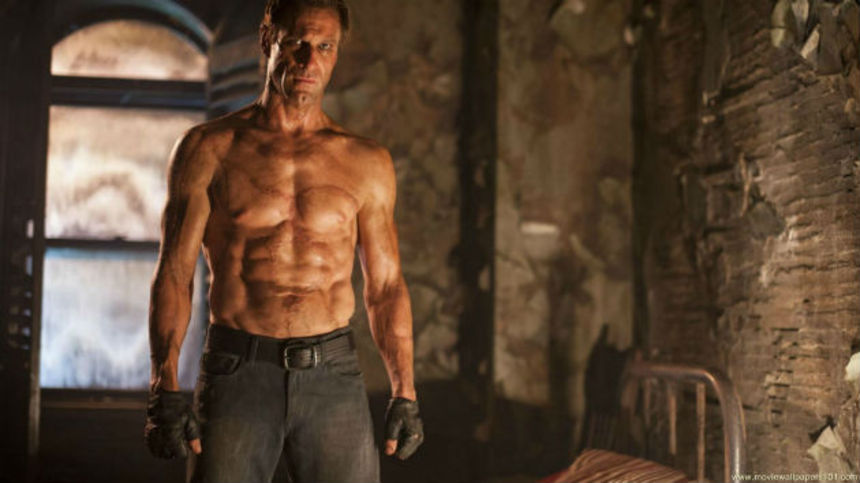 Stuart Beattie, who made his directorial debut with 2010's Tomorrow, When the War Began, delivers what amounts to a simplistic, spiritual sequel to that film, even though he has stepped over into an extension of the Underworld franchise. Having only seen Beattie's first film a few hours before, it made for a very strange, yet familiar sensation.

This time the battle is married to characters from Mary Shelley's novel, first published in 1818. The novel itself is "honored" by allowing it to serve as the origin story for the monster created by Victor Frankenstein, with a crucial difference: the monster is immortal *. Unlocking the secret to his immortality is the key that is sought after by both gargoyles and demons.

In Tomorrow, When the War Began, Beattie made destructive moments look seductively attractive, filled with slow-motion characters emoting in the foreground, and fiery explosions splattering the screen with bodies and objects in the background. He employs similar methods on a much grander scale in I, Frankenstein. Dozens, if not hundreds or thousands of creatures, are killed in spectacular fashion: dead gargoyles "ascend," i.e. return to heaven in beams of blue-tinged light stretching upward into the always cloudy night sky, while dead demons explode like dying fires, their physical bodies collapsing in clumps of embers, arcing outward in rivers of flames that "descend" back to Hell.

It's all very, very pretty, especially since the gargoyles sprout giant wings like angels and flap around -- the poor demons are stuck wearing business suits inspired by Agent Smith in The Matrix before they emerge from disguise -- and the sight quickly becomes the film's raison d'être.

The arresting and gorgeous visuals, presented with all the depth and conspicuous layers we've come to expect from modern 3D, only serve to emphasize a shortcoming of the film, which is that no one really cares about the stakes involved. Sure, the Frankenstein monster (named Adam and played with stentorian blunt force by Aaron Eckhart) whines about being alone in the world, and the queen of the gargoyles (Miranda Otto, serving up a dish of elegant disdain) tells Adam he must find his place in the world, or some similar old-world folk-song lyric, but the armies of gargoyles and demons act like mercenaries, resigned to their fate and perhaps a bit too eager to die so they can return to their natural dwelling places.

And no wonder; though apparently the film is meant to be set in modern-day London, humans are only glimpsed fleetingly, and never raise a voice of complaint about gargoyles flying around churches at night and making demons go boom. Ostensibly, the lead characters keep talking about the fate of humanity, but it seems that humanity is not even a wee bit interested in what happens to them. 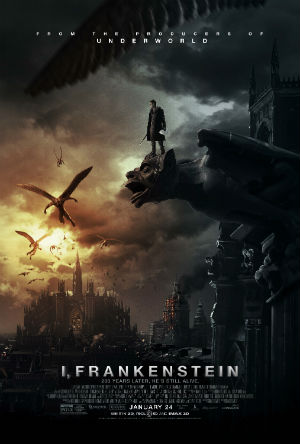 Which left me sitting in a theater, and asking myself questions that are entirely peripheral to the story, such as, 'Where did Frankenstein's Monster go to get his hair cut? How did he wear the same outfit for 200 years without the material wearing out? Hey, weren't those gargoyles also in Tomorrow, When the War Began?'

At least I have an answer to the last question: Beattie cast Chris Pang, Deniz Akdeniz, and Caitlin Stasey, who all had leading roles in Tomorrow, When the War Began, as supporting gargoyles here. From the Underworld series, Bill Nighy contributes a welcome turn as a slightly different character, a prince of demons, biting off his lines with relish, and Kevin Grevioux lends his presence as one of the prince's helpers. Bruce Spence pops up in a small role. Yvonne Strahovsky is fine as a naive scientist. Jai Coutney provides appropriate, anonymous menace as a suspicious gargoyle.

Behind the camera, Tomorrow editor Marcus D'Arcy returns in that capacity, so the two films share a rhythm that allows the story to flow at a good, strong pace without leaving anybody behind. Composers Reinhold Heil and Johnny Klimek also return with another subtle, effective score.

Beattie can certainly tell a story. But is this a story worth telling? His screenplay is laser-focused on setting up the universe, laying out the good guys and the bad guys, and constructing a framework for the visual spectacle. He succeeds in all those areas, without exceeding in any one of them.

That about sums up the movie, too. I appreciated the nods to Shelley's work and the 1931 Frankenstein, and definitely enjoyed watching the pretty light show. But, given the set-up and the creative principals involved, I, Frankenstein is nothing more and only a little bit less than what I expected, which makes it a wash.

* Update: Commenter DarlingMagick points out that the theme of immortality is explored in the book. I read it many years ago and should not have relied on my faulty memory. I regret the error.

The film opens wide in theaters across North America on Friday, January 24. It is available to watch in 3D and in IMAX.

More about Tomorrow When the War Began