I, FRANKENSTEIN Opens Big ... In Russia 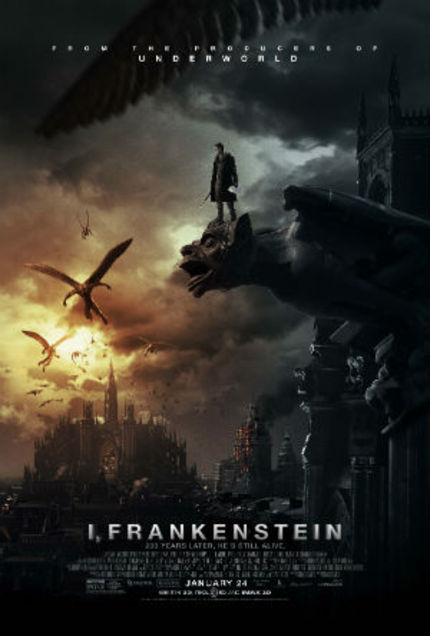 By now you have may have heard that I, Frankenstein, the only new wide release opening this past weekend in the U.S., died an ignoble death at the box office. Its estimated earnings totaled just $8.3 million, leaving it in sixth place.

Lionsgate vigorously promoted the film, and star Aaron Eckhart dutifully appeared on all the required talk shows, but the advance materials made it clear that the movie would be little more than a spin-off of the Underworld franchise, which had already run its course. In my review, I commented that I, Frankenstein is "nothing more and only a little bit less than what I expected," and, clearly, that was not enough to draw audiences back into theaters. Of those that attended, some 60% paid the extra dollars for the 3D presentation. (No advance screenings were arranged for the press, but at the Thursday night screening I attended at 10:00 p.m., only eight other hardy souls attended.)

In Russia, however, it was a different story. In a much smaller theatrical market, the film made $6.4 million, opening on more than 1,800 screens across the country, and gave it the #1 spot on the box office charts by a good margin. Homegrown Russian films have enjoyed impressive support this year, with a "family seasonal comedy" titled Yolki (translated as "Christmas tree") topping the charts over the holidays. Why would they now turn out for I, Frankenstein?

It may be that Russian audiences were hungry for another live action fantasy action picture from Hollywood -- The Hobbit: The Desolation of Smaug has done very well there. Or, maybe it's because Ride Along has not opened there yet. In any event, the producers of I, Frankenstein can take heart that someone appreciated their woebegone modern-day mashup of gargoyles, demons, and Frankenstein's Monster.