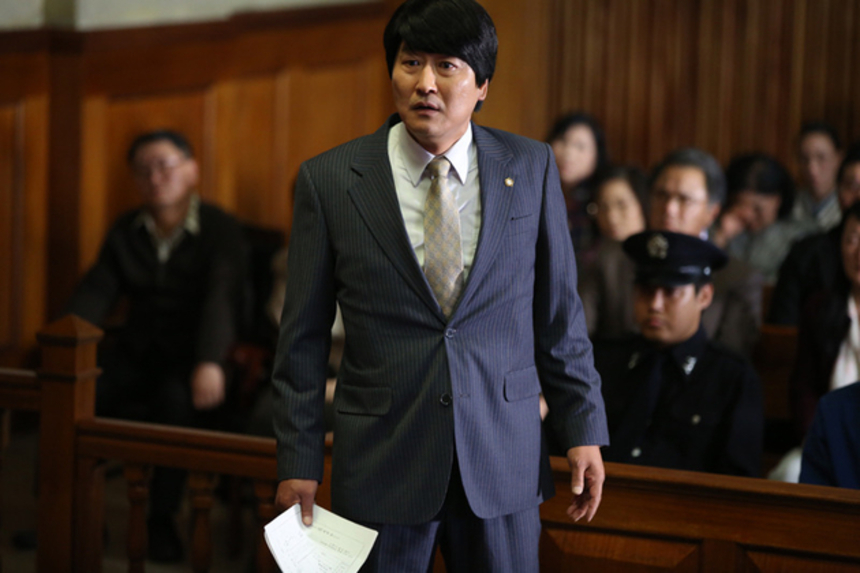 The combination of politics and cinema has led to some of the most incendiary films the medium has ever produced.

Though a tricky balancing act that requires a deft handling of ideologies and a sensitive navigation of contemporary political climates, political works have the potential to transcend both the artistic and diversionary aims of cinema. Be they wake-up calls or calls to arms, or even painful reminders of moments of history that should not be allowed to slip into anonymity, this is one of the few 'genres,' for lack of a better term, that can have a real impact on society.

Falling into this new category, or rather bursting into it after swiftly cracking the ten million viewers barrier in Korea, is The Attorney, the promising debut film of Yang Woo-suk, which follows in the footsteps of recent courtroom thrillers Silenced (2011) and Unbowed (2011). The film stars Song Kang-ho, who, following an enormous 2013 that also saw him star in Snowpiercer and The Face Reader, has reclaimed his title as Korea's biggest star. Fictionalizing the early years of the late President Roh Moo-hyun, when he was a lawyer in the 1980s, this new film, part character drama and courtroom thriller, delicately handles its sensitive subject.

Song Woo-suk (an amalgamation of the director and star's names) is a lawyer without a high school degree. Taking advantage a new law that allows lawyers to act as notaries in real estate, he aggressively markets himself in this niche, initially to the ridicule of other attorneys, but soon to the ample benefit of his bottom line. As he becomes more successful he adds tax law to his practice in the early 1980s but when an acquaintance's son is taken, tortured and coerced into confession under the guise of the Chun Doo-hwan's notorious National Security Law, something stirs in the counselor's conscience. He soon finds himself defending a group of young men in a case against the government within a courtroom that is far from sympathetic to their plight.

For over a decade, Korean cinema has merged entertainment with history and social awareness. Achieving a synthesis that succeeds in the aims of escapist entertainment by paradoxically forcing its audience to remember things that modern Korean society is generally content to sweep under the carpet, the best examples of this breed of local cinema, such as Memories of Murder (2003), have driven the masses to theaters and challenged them not to forget what the country went through in the 20th century. The clever trick is that they have done so under the guise of populist entertainment, re-appropriating Hollywood genre techniques and melding them with Asian melodramatic beats to create something with both a distinct local flavor and a social message.

Former webcomic writer Yang Woo-suk follows that tradition by spinning his tale of 1980s political nostalgia as a courtroom thriller with enough dramatic elements taking place away from the judiciary venue to keep it from being too blunt. Yang cleverly uses the first half of his film to draw us into the life of one individual, who is a family man, a hard worker and an honest person seeking to make a better for himself, his wife and his children. He moves into an apartment, an all-important symbol and metaphor for social elevation in Korean society, but he seems content to ignore the dark political realities surrounding him, as exhibited by a scene where he looses his cool after being castigated by a reporter at a high school alumni get together. It isn't until these realities have a direct effect on the people around him that he finally decides to use his skill and influence for good rather than profit.

Playing Woo-suk and anchoring the film is Song Kang-ho, who combines his natural charisma and affability in the first half with an unwavering sense of idealism and justice in the second to trilling effect. Song has had many high points in his career but his courtroom scenes, particularly his exchange with the villainous security operative played by Kwak Do-won, are electric and stand as some of the highlights in his venerable filmography.

Though nowhere near as encroaching as in most commercial Korean fare, melodrama does peek its head at times throughout the film. The many tears shed in the courtroom have their roots in a dark epoch of Korea's history but may be a tad much for viewers unfamiliar with the film's context. The Attorney also boasts a solid if unremarkable mise-en-scene with only a few scenes showing off inspired camerawork.

Led by a terrific Song Kang-ho and deftly handling its sensitive subject, The Attorney stands as one of the most successful combinations of commerce and social consciousness in recent years. It may not go down as one the very best but it has already cemented itself in Korean film history.

More about The Attorney