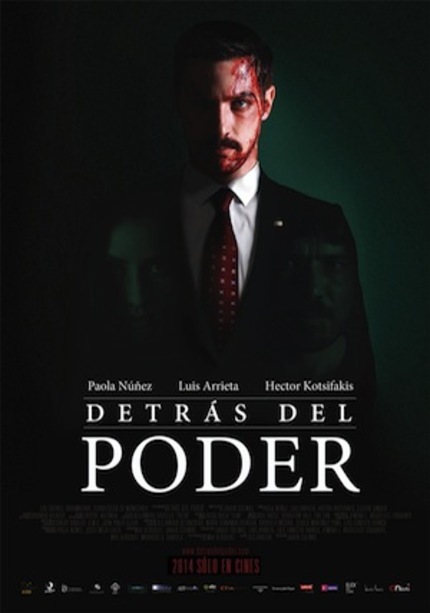 I have to begin this review by saying just two weeks ago I finished the first season of the extremely engaging political series House of Cards. So after watching Detrás del Poder (there's no official English title yet but the literal translation would be "behind the power") I began thinking of the powerful presence both Kevin Spacey and Robin Wright have on the series and how Detrás del Poder needed something as simple as better acting to be at least a competent thriller.

It might be a little unfair to compare House of Cards with this Mexican production... but just a little. After all, both try to show us how the political world works with all the puppeteers and the collateral damage, though Detrás del Poder functions most of its time as a mystery picture, away from politics, in which the characters reveal their true intentions little by little. And look, I have nothing against actress Paola Núñez and her soap opera background, but she definitely can't carry the weight of a political thriller that puts her character as the key "femme fatale" (yes, in quotations).

Detrás del Poder actually kicks off as a love story with Núñez's character (Mónica) getting romantically involved with the young congressman Miguel (Luis Arrieta), who started working as her layer and ended caring and protecting her from the apparently abusive ex-husband. The director Javier Colinas is really interested in playing with time. Flash forwards and flashbacks are used throughout the film, while in the main story of Mónica and Miguel some years pass instantly and they become a married couple.

There's really not a single remarkable scene between Núñez and Arrieta and the movie quickly becomes a thriller with violence and black humor. The official synopsis makes you believe this is a film about a man (the mentioned congressman) who's attacked inside his own home by a stranger that actually has an agenda. Like I said, Detrás del Poder is not always political and the mind game between these two men was the original story (based on true events). All the political stuff came later to the script, as the creators remarked during the press conference that followed the screening. 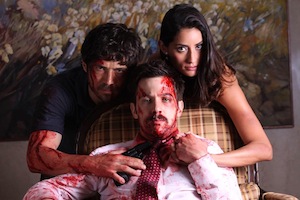 When the stranger, only known as "the messenger" (and played by Hector Kotsifakis), enters to the story, a sort-of Big Bad Wolves thing begins. The film suddenly depends on two actors; we have the kidnapped congressman being threatened and tortured by the messenger. There's a certain amount of freshness brought by Kotsifakis and his swearing but, ultimately, more than one memorable duel between the men, this part of the film works only to explain the plot to the audience by using dialog and flashbacks.

Big Bad Wolves is arguably the excitingly unpredictable thriller, with perfect use of black humor, that director Colinas failed to accomplish with Detrás del Poder. It is worth noting though that during the conference, Colinas said Detrás del Poder is only meant as a profitable piece of entertainment.

I understand his position but, quite frankly, Colinas could have done a much simpler movie if all he wanted was to entertain. Instead there are different ideas that, if you don't think much, make perfect sense once combined. Hell, you will even find some unintentional humor and crappy makeup blood to make the trip a little more entertaining. But you just have to think a bit deeper to realize this is one messy mix of ideas and that the whole political subplot makes no sense. So in the end, Detrás del Poder needed better acting and a more believable story in order to become a decent political thriller.

Detrás del Poder opens in Mexico, with around 60 copies, on Friday, January 17. You can watch the official trailer below (no English subtitles).

Do you feel this content is inappropriate or infringes upon your rights? Click here to report it, or see our DMCA policy.
Detras del PoderHector KotsifakisJavier ColinasLuis ArrietaMexican CinemaPaola Nuñez