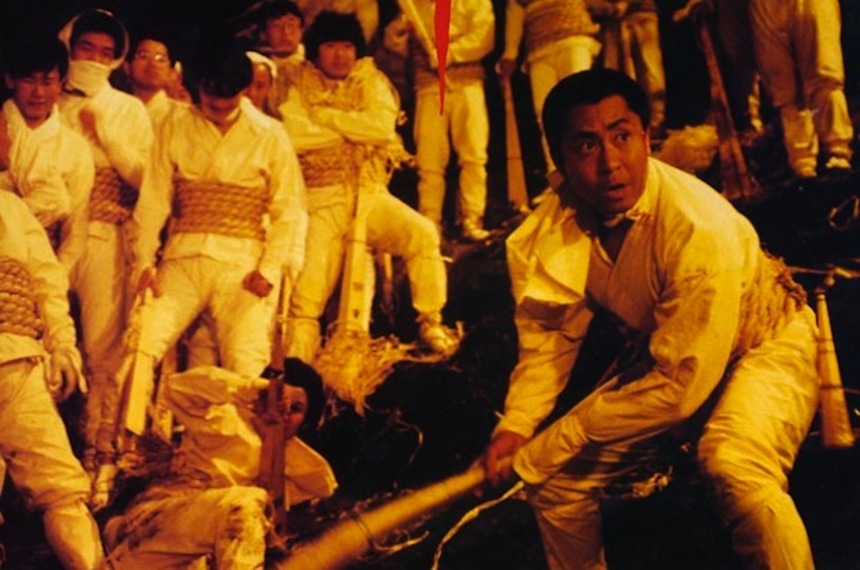 As the extensive Donald Richie tribute series continues at Japan Society, this might be a good time to mention that while the late critic helped popularize the canon daddies of Japanese film in the West--Kurosawa, Ozu, Mizoguchi--he was hardly in the business of propping up an easily digestible status quo. More often than not, Richie actively championed lesser known filmmakers and their more obscure, even controversial, work.

Yanagimachi Mitsuo's Himatsuri ("Fire Festival") is the perfect case in point. With subtitles translated in part by Richie himself, this is the kind of film--rarely shown in repertory (at least in New York) and not available on R1 DVD--that more than deserves some attention. Simply on the level of storytelling it's often dazzling, with nearly every scene impactful, either loudly or quietly, even if one can't quite tell where the film is heading overall.

And that's where things get interesting. . . or problematic. Or both. That authorial remove and its ability to keep the audience off-balance. That unforced ambiguity that avoids moralizing even when we start to crave it for the grounding it might provide.

In short, what exactly are Yanagimachi's "intentions," if one can use that clumsy word with such an artist? Does Himatsuri, which takes place in a remote community situated meaningfully between mountains and sea, celebrate a kind of proto-fascist nature worship? Or perhaps an elemental form of manliness, a trait that's apparently both misunderstood and anomalous in the modern world? Finally, how about purification through self-destruction, with hints of homoeroticism thrown in for good measure as if in pale echo of Mishima?

Not being versed in the Shinto worldview presented here, I can't comment with any insight on all the fascinating, if troubling, thematic stuff. My sense is that Yanagimachi is not so much encouraging worship of mountain goddesses per se, but rather pointing out that Japan loses something vital (if exceedingly dangerous) when its people can no longer at least commune in some way with these primal deities. The fact that this communion is expressed through a magical sequence--the Stravinsky-esque score by the incomparable Toru Takemitsu helps out big time--recalling Cocteau's La Belle et la Bête may jolt some viewers, just as an earlier impromptu dance number à la Godard's Bande à part may also seem incongruous.

For me, though, the only thing that's truly disturbing is the brutality that involves real life animals. Still, it's understandable how some audiences may be more turned off by the sudden violence against the human characters, and I can only imagine that Japan Society's guest speaker will address such issues. In fact, if this evening is anything like the packed screening of Ozu's Late Autumn I attended in December, the result will be spirited gathering of like-minded cinephiles... one to which New Yorkers would be wise to treat themselves.

Click here for more on Donald Richie at Japan Society and to purchase tickets to the January 24th screening of Himatsuri.

Do you feel this content is inappropriate or infringes upon your rights? Click here to report it, or see our DMCA policy.
donald richiefire festivalhimatsuirjapan societyYanagimachi Mitsu