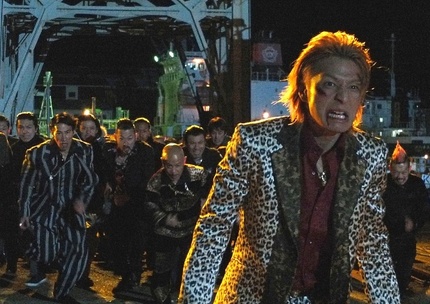 (Rest assured that people of the fashion police will leave the cinema in tears...)

An International Film Festival Rotterdam without a Miike Takashi film is almost unthinkable. Ever since Audition screened, back in 1999, the eclectic director has sent a film Rotterdam-wards, and he often visits himself. I wouldn't be surprised if he will be made a honorary Rotterdammer sometime in the future.

It helps that the man is prolific enough to be able to send stuff our way every year.

This time, he has picked The Mole Song: Undercover Agent Reiji, a manga adaptation. Miike has done more manga adaptations than regular directors have made movies, so he is on familiar grounds here. Fans showed up in droves, and a good time was had by all. So what is it about? 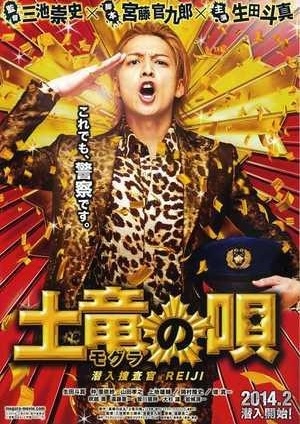 Reiji is a failure as a policeman. Bad grades in school and a lousy career in the police force have resulted in a bad reputation, until one incident leaves his superiors with no choice but to fire him. However, this gives Reiji a unique chance to infiltrate Japanese organized crime. More specifically, a feared Yakuza clan which has started dealing drugs on a national scale. Reiji accepts and to become a mole, he begins fraternizing with some insane gangsters.

Because Reiji's general attitude to stress is flipping out violently, he gets on surprisingly well with his new Yakuza buddies. Unfortunately he manages to become a lynch-pin in a turf war as well, and before long, all hell breaks loose when the gangs bring their most colorful enforcers to the battle.

"Why are Miike Takashi films so often 50% great fun and 50% too long?", someone at our screening commented. It's a valid question, and one which is certainly applicable to The Mole Song: Undercover Agent Reiji. For Miike's newest is an exuberant, eclectic over-the-top comedy, which is more than two hours long. Spot what might be the trouble with that. A bit more diligence in the editing phase, and this might have been a great deal better.

Thing is of course, we do love Miike Takashi for his shoot-from-the-hip approach, and his tendency to not dwell on one project for long. When he fires on all cylinders he's undeniably awesome, and when he fires on, well, just a FEW cylinders, results are mixed. And in this case, the mix thankfully tumbles over into the fun side.

Partly this is because Miike plays the whole yakuza environment completely straight, building a semi-realistic background like a house of cards... and then he lets his outrageous characters smash right through it. Reiji's rite of entrance, for example, is pretty impressively filmed, juxtaposed nicely with his weird look and stupid behavior during the ceremony.

Reiji is played by Ikuta Tôma, a tall guy with a rubber face which seems to have a grand total of four expressions. One of them is "fury" though, which basically turns him into a videogame character. You'll start to welcome that look as that is mostly when the tomfoolery stops and the fun begins.

The occasional bloodletting happens, but the film is never gory or otherwise extreme. Well... except maybe for the outfits the yakuza are wearing. Butterfly prints, tiger stripes, excessive bling, temple guardian hairdos... this film contains some of the weirdest looking gangsters ever.

All in all the film never takes off as a thriller, nor does it create any tension. Also, many of the jokes are obvious and/or lame. But Miike's wicked sense of fun often shines through, and there are plenty of laugh-out-loud moments. It may be sleight, and at over two hours in length that is a LOT of sleight, but it strangely doesn't outwear its welcome either.

This is definitely not one of the best things Miike Takashi has ever done, primarily because it's too long, but there is a lot of fun to be had with The Mole Song: Undercover Agent Reiji. The jokes that land easily win over the jokes that fail.

Audiences in Rotterdam thought so too and awarded the film a solid 3.9 (out of 5).