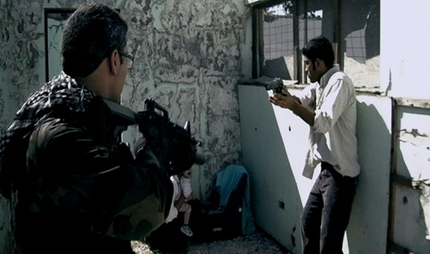 How many zombie movies have been made since The Walking Dead started? Maybe too many, and just the minority, if not the exceptions, are even watchable and recommendable in any fashion. The other element of this zombie craze in recent years is that the phenomenon has expanded beyond the English speaking market, with a reappeareance of the zombie genre in Japan from the new Japanese Extreme Cinema, just to name one example.

This movie in particular comes from the country I live in: Chile. Chilean zombie films are not something you hear about every day, but this movie has actually been screened in a lot of film festivals of the genre all around the world starting in 2011, and just this year (around Halloween) it was released to theaters here. It had almost a month-long run in one theater and it managed to sustain a decent amount of audience, since the subject is attractive and it was released, as well as announced, as the first Chilean zombie film (which is a lie, because there's Solos) and it was released under the new title Muerte Ciega (Blind Death).

The movie itself is ... no different from any other zombie movie that was made in the last three years, but it's certainly distinct in the way that it gets around its lack of budget by having almost no zombie attack scenes, with barren places where the zombies never go up to the number of 10. It doesn't help, either, that it seems every zombie is a fan of trash metal or something, as they all have long hair and a t-shirt of a metal band. Then there's the acting, which is never good, but not laughable either; it just kinda sits there without any commendable thing to say about it, with outrageous accents and badly redubbed lines.

Now, I didn't want to be rough on this movie, but I can't help it! The directors of the movie were kind enough to lend me a screener of this movie after I missed it at theaters, but as I was watching I realized that it wasn't that the movie was faulty because of the reasons mentioned above, but because the story is boring. It's about a group of military men who have to go to find the "source" of the infection that destroyed the world. It's Chilean, but just in name, because there's nothing that distinguishes it from any other low-budget zombie movie.

The special effects are non-existent, and the music is uninspired, nevertheless, I can't help but feel a bit of generosity in these joyful times and give this movie some credit. It managed to sell itself quite well in this stingy market, and it did win awards in some of the festivals, so there's some worth in the sense that at least it keeps the camera quite still in the action sequences, and they do have some logic.

That's all I can say for it, but for me, you can skip this just as much as you would skip the last generic direct to DVD zombie film from the USA.