Review: THE RAILWAY MAN, A Difficult But Confused Adaptation 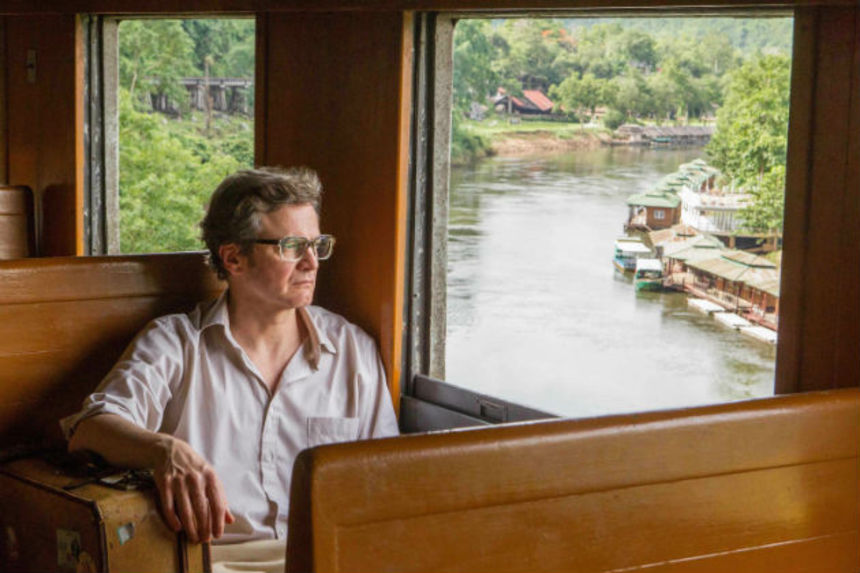 Japan's involvement and subsequent denial in its atrocities of World War II has always been a difficult point to convey. The Railway Man, which is based on the incredible true account of soldier Eric Lomax, attempts to tell this story and honour his book and memory.
Unfortunately the results are so middling and inadequate compared to the book, and so emotionless compared to the phenomenal searing tones of director Jonathan Teplitzky's previous work Burning Man, that it lets the complex story down considerably.

The setting could be any time and place, given the lack of period detail, but it is in fact years after the war. Teplitzky's eye for vivid and emotional colour certainly does not go astray and from dreary England to exotic jungle, the colour palette is one of the strongest elements of the film.

Eric Lomax has survived the war and falls head over heels for the prim Patricia, who soon becomes his wife. She is played with a distinct lack of flair by Nicole Kidman, who brings little to the proceedings. Colin Firth is Lomax, who does his best as the traumatized soldier and train geek. In fact this love and passion for locomotives is a vital component of the novel and serves the irony of his trip in South East Asia on the 'death railway', but it is only briefly mentioned in the film.

Shortly after he is married, he flies into a post-traumatic state that begins with an utterly brilliant and surreal journey into his tortured past. It is soon revealed that one of his captors, a cruel Japanese translator, is alive and living happily. To confront his literal demons, Lomax must decide how he is going to face this man. The film throws a curve-ball at this point by introducing an extreme element to get Lomax motivated. This part of the plot is complete fiction compared to what actually happens in the book.

The film's best moments are undoubtedly the flashbacks. Young and impetuous Lomax (Jeremy Irvine) has great chemistry with his engineer troop, and in the war camp they work out interesting schemes together, including building a radio from scratch. These moments feel reminiscent of The Great Escape and are well-directed, maintaining the suspense that they might be caught.

Later scenes of torture and interrogation fail to convey the cruel extent to which the Japanese actually hurt their prisoners of war, these scenes are brief and glossed over, despite the languishing mental damage they cause to Lomax. In particular a dark room he focuses on in his dreams - a place that he shuts out and refuses to speak of, is not given enough attention it needs and lessens the emotional impact.
Scenes of the cruel translator being browbeaten by his commanding officers also play too loose and conveniently, as suddenly we are supposed to feel for him also. This type of manipulation is not really necessary in a film of this caliber, as its base story of reconciliation and forgiveness is already difficult enough to swallow.

Ultimately this is about a personal relationship; it does not represent a nation's forgiveness, although the film certainly treads a thin line in this regard by not showing or reporting just how inhumane the Pacific axis were.

The feel-good ending may be true but its feels tacked on and clumsy compared to the pacing of the rest of the film. Hiroyuki Sanada as Nagase barely convinces as the older and much more handsome version of the translator, and the chemistry between him and Firth does not really work either.

The Railway Man is a confused film, playing it safe but also allowing for some POW camp entertainment and odd tragedy that barely ties in with the actual tragedy and atrocity of the war. It also changes major parts of the actual story, and with these thoughts in mind, the film comes off more as a pandering mainstream awards effort than anything else.

The Railway Man opens in Australian theatres on Boxing Day.

More about The Railway Man