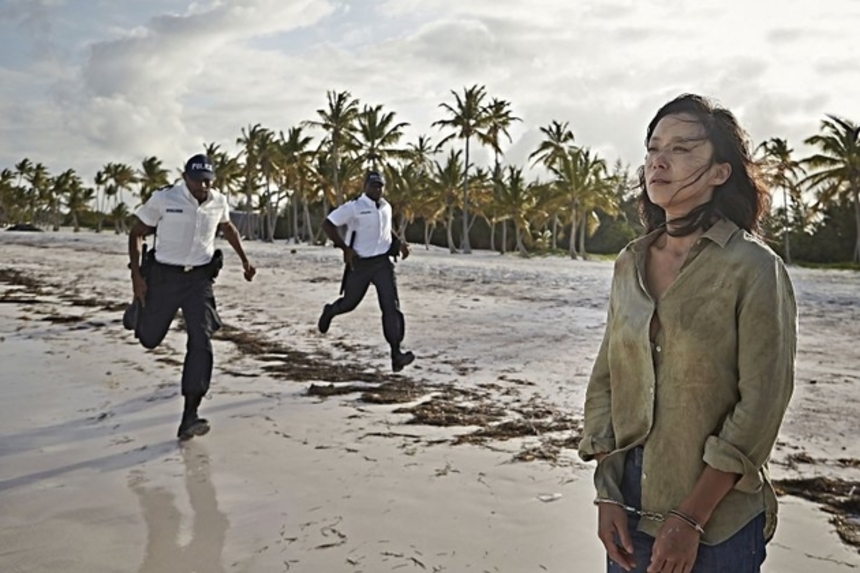 Following a two-year break after the disappointing Countdown, Jeon Do-yeon makes an exceedingly welcome return to the big screen in Way Back Home. With a role that suits her to a tee and under the considered direction of Pang Eun-jin, fresh off last year's Perfect Number, Jeon is a marvel in what may well become an end-of-year hit for CJ Entertainment.

In Way Back Home, Jeong-yeon and Jong-bae are a happy couple with a child who open an auto repair shop. But when Jong-bae's friend dies, whose loan he had signed as guarantor for, the family is plunged into debt. In the midst of financial despair, Jeong-yeon disappears, until she is caught with a suitcase full of cocaine in Paris' Orly Airport. Due to repeated inaction from Korea's embassy in France, Jeong-yeon is sent far away to a jail on Martinique, an island in the Caribbean.

While watching Way Back Home earlier this week, I was whisked back to my history lessons, to an episode in French history known as the Dreyfus Affair. Alfred Dreyfus was a Jewish captain in the military who was charged with treason in 1894 and sent to spend the rest of his days on the infamous Devil's Island off the coast of French Guyana. Martinique and Devil's Island may not be the same but the injustices of both stories share many parallels. Jailed on a foreign island thousands of miles from familiar shores, left to languish by inept bureaucrats and finally freed following outcries from the liberal press, these real events are strikingly similar.

The stakes are much lower in Way Back Home, which, as one would expect from commercial Korean fare of this nature, is largely about a woman trying to find her 'way back home' to her family. Yet the ring of social critique can be heard throughout much of the film. The Korean civil servants in France are painted as self-serving and cowardly, thus becoming the prime antagonists, as there inaction keeps the principal from her family back home. The villains here, of the sort one would easily come across in real life, are fairly low-key, but with injustice as the prime conflict generator, they needn't be particularly loathsome.

Injustice is a very powerful tool in cinema, particularly when it comes at the hands of judicial or civic systems that we are supposed to trust with our problems. It's eminently relatable, and when treated properly, has the potential to be utterly terrifying. Pang never goes overboard and has the sense to inject flaws into the main characters. The closer to us they seem, the more it works. When angelic characters face injustice in cinema, their plight can be affecting but a disconnect with the audience is inevitable.

With three credits under her belt, former actress Pang Eun-jin (she starred in the late Park Chul-soo's 301/302 [1995] among others) has proven herself to be a formidable director with a solid grasp of genre mechanics and dramatic beats. It's no surprise that her films have featured some of the better female characters in Korean commercial cinema. Along with Im Soon-rye (Forever the Moment), Byun Young-joo (Helpless) and Roh Deok (Very Ordinary Couple), Pang is leading a small but very committed contingent of women behind the camera in contemporary Korean film.

If she does misstep in Way Back Home it's only because she doesn't put her best foot forward fast enough - it takes a while for things to get going in the 129-minute film. While the strong cast is always watchable, the film's first half largely lacks any sense of urgency. Nevertheless, the film balances its judicial, custodial and dramatic moments well, even if large wells of tears do crop up now and again. Technical specs are also top-notch, with strong location photography in the Dominican Republic (standing in for Martinique) yielding a scorched aesthetic that contrasts well with the earthier look of the Korea-filmed scenes.

But make no mistake about it, this film belongs to Jeon Do-yeon. If not quite at the level of Secret Sunshine (for which she won the Best Actress Prize at Cannes in 2007), Way Back Home ranks among her best performances. Beginning as a happy mother and then an embattled wife when things go awry, Jeon, who is quite small, soon finds herself as a helpless and pathetic resident of a foreign penal system who eventually discovers her inner strength. Despite largely acting in Korean alongside people who don't speak a word of it, Jeon is never less than convincing. Aside from her towering performance, a word should also be said for the solid performances of Ko Soo as the helpless husband and Bae Seong-woo as one of the unctuous and slimy embassy bureaucrats.

Though reserved when compared with something like Miracle in Cell No. 7, the waterworks here may be off-putting for some but aside from that and its slow start, Way Back Home is strong work from director Pang and an impressive entry in Jeon's filmography.

Do you feel this content is inappropriate or infringes upon your rights? Click here to report it, or see our DMCA policy.
injusticejeon do-yeonko sookoreakorean filmmartiniquepang eun-jinway back home집으로 가는 길