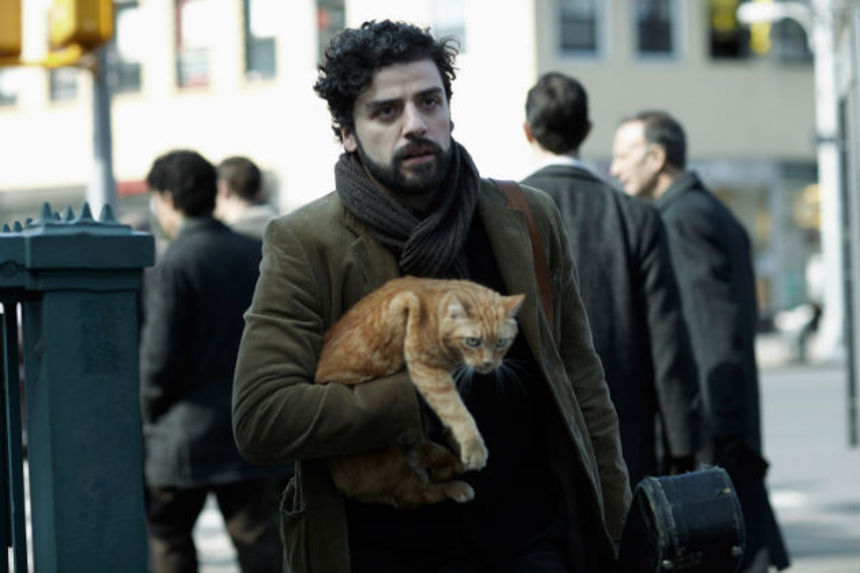 Winners of numerous screenwriting awards, including two Oscars, it's difficult to think of many filmmakers more adept at their craft than Joel and Ethan Coen. So it comes as a bit of a surprise when, in the first act of the brothers' latest film, Inside Llewyn Davis, Oscar Isaac's titular Llewyn pulls out a trick straight from Screenwriting 101 and literally saves the cat. As Blake Snyder will tell you, this technique is used to build quick sympathy for the protagonist -- in this case, making us like Oscar. It works -- and that is thankfully just about the only by-the-book beat in this nontraditional but wholly enjoyable film.

Set in New York City's Greenwich Village during the 1960s, Inside Llewyn Davis is a folk music odyssey that revolves around our hero of the film's namesake on his quest to get a break in the music business. Nothing much is going right for Llewyn as we pick up the story soon after his music partner's unexpected suicide. An air of melancholy prevails, but is countered by Llewyn's 'what else could go wrong?' attitude. Whether he is taking a gut-punch from an angry fling's revelation that she's pregnant, or a literal punch to the gut from a pissed off concert-goer, Llewyn manages to keep a sardonically positive attitude that helps the film remain enjoyable throughout.

Llewyn's story is made up mostly of his interactions with the colorful characters surrounding him. One of the brightest is Carey Mulligan's Jean, a sweet singer with a firecracker temper who unleashes her fury on Llewyn on multiple occasions. This is Mulligan as we've never seen her and it's a joy to witness her dark side. Jean makes up one half of husband-wife folk duo Jean and Jim; Jim is relatively small role for Justin Timberlake, but it's good to see he approaches it with the same class he would a meatier part.

Numerous other stars show up in small segments from John Goodman to Garret Hedlund. Adam Driver has a particularly memorable role as a guitarist with a unique percussion style. But none of the characters play much importance past the slight gravity they impart on Llewyn's orbit. The Coens make conscious decisions to leave subplots unresolved, eschewing storytelling conventions to good effect in order to more richly develop Llewyn's character.

Music plays a particularly important role in the film and T-Bone Burnett's score is top shelf. All of the actors sing their own parts. We've obviously seen this before from Timberlake, but Isaacs is a real talent as well. Equally as impressive is the cinematography by Bruno Delbonnel, whose lush visuals are a joy to lay eyes on throughout. A final note of praise should be saved for the team of production designer Jess Gonchor and all those responsible for the period look of the film. This is the rare film that strikes the perfect balance to transport us to the era without going overboard on 'cool' period elements.

It will be difficult to escape the comments that Inside Llewyn Davis is one of the Coen Brothers' slighter efforts. This shouldn't be taken so much as a comment on the quality of the film, as it is more of a reaction to the structure of the story. This is not a plot-driven narrative. This is a tragi-comic character piece that succeeds wildly because of the nuanced performance by Oscar Isaacs at its center. Isaacs carries the film by succeeding at the formidable challenge of turning a dude who is kind of an asshole into a genuinely likeable character. After all, he did save the cat.

Review originally published during the Cannes Film Festival in May 2013. Inside Llewyn Davis will be released in select cities in the U.S. on Friday, December 6 by CBS Films. Visit the official site for more information.