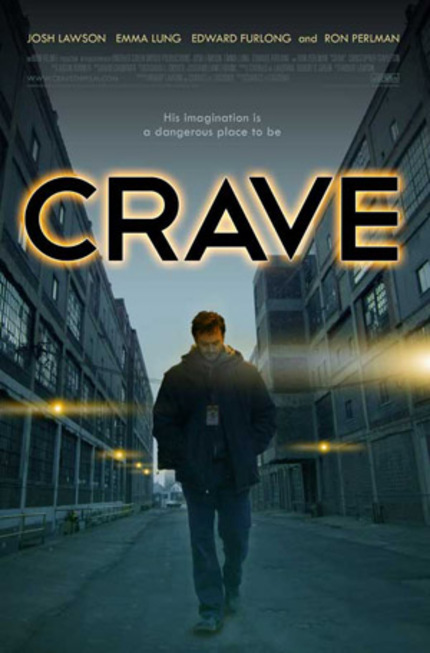 Crave is the feature debut of Charles de Lauzirika, a man best (un)known for directing/producing DVD special features. So what, you say? Sew buttons on a dead hobo's suit! You know you love yourself some special features, and de Lauzirika is responsible for some quality content on many a quality disc. Hell, his Alien 3 featurettes might be better than the film itself.

Crave won the New Flesh Award for Best First Feature at the 2012 Fantasia Film Festival, so somebody thinks he's pulled it off. Personally, I disagree. And while I don't think Crave is a bad film, I don't think it is a particularly good one, either.

The opening voice-over was an immediate turnoff for me. It is put to more effective use later in the film, but all that upfront telling-not-showing sets a bad precedent. It is indicative of the see-sawing tone of the film as a whole, which will work for some but not for others. You know what they say: one man's genre mashup is another man's uneven.

A lot also depends on the casting in a film like this. Lead actor Josh Lawson walks a fine line between likeable and loathable, but doesn't have the chops to nail it 100%. It is a valiant effort, though. His love interest/obsession is played with a Katie-Holmes-if-Tom-had-allowed-her-to-continue-to-take-off-her-clothes-on-camera-all-these-years cuteness by Emma Lung, so he has decent support there. Then there's Ron Perlman, always a pleasure, in a role he could play in his sleep. The weakest support beam by far is Edward Furlong, who, according to IMDb, still gets a ton of work, and is as whiny as he was in Terminator 2, according to me. He does, however, provide my favorite moment of the film (thumbs up!).

Speaking of moments, there are many the film gets right. While Lawson doesn't hit every dramatic note pitch perfect, he and Emma Lung have great chemistry (while it lasts). Also, an example of when the voice-over works? The many voices in Aiden's head arguing with each other-- one confident, one not; one angry, one rational. Also, the closing credits are pretty kick-ass. So there is potential here, it just doesn't add up to a satisfying whole.

I'd put Crave down as a near miss. Unfortunately, a near miss is still a miss. For the film scavenger roaming the scrap yards for a funny scene here and an outrageous gore effect there, there's a decent amount to salvage. Hopefully de Lauzirika will continue to hone his skills. I think he's got something good in him, and I'd be interested to see what he does next.

Review originally published during Fantastic Fest in September 2012; The film will be available to watch via various Video On Demand platforms on Friday, December 6. It will also open in select theaters in the U.S. Visit the official Facebook page for more information.

Do you feel this content is inappropriate or infringes upon your rights? Click here to report it, or see our DMCA policy.
Charles de LauzirikEdward FurlongEmma LungJosh LawsonRon Perlman