Destroy All Monsters: Unique In The Universe 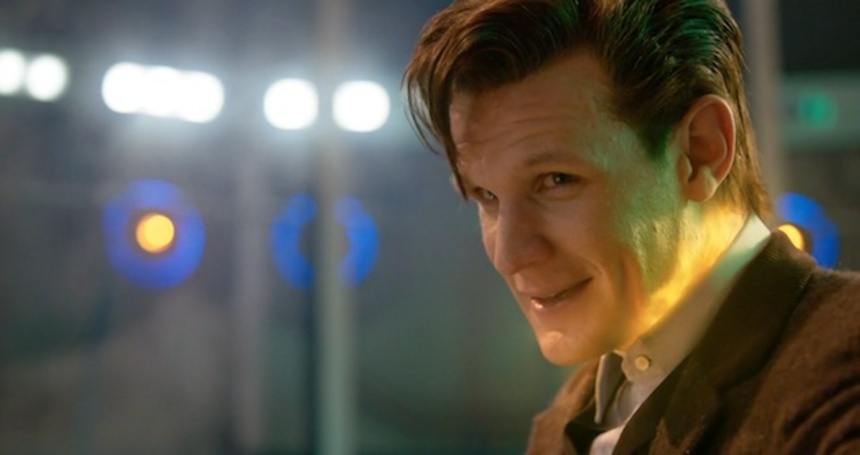 The reason "The Time of the Doctor" hit me (hard) was not the exit of my Doctor, Matt Smith, from his place in the series; nor the (generally quite excellent) Christmas tale spun for the Doctor by Doctor Who showrunner Steven Moffat. No, the freight of "The Time of the Doctor" landed on me (hard) when the episode made plain that the back half of Smith's final season as the Doctor, from "The Snowmen" till now, has only ever been about one thing: the self, and its multitudes.

This season-long throughline, which carried us through Doctor Who's 50th anniversary year, came to a dizzying peak on Wednesday night, seconds before Smith transformed into the Twelfth Doctor. Eleven delivered what is likely Steven Moffat's thesis statement for the year to a disbelieving Clara "The Impossible Girl" Oswald:

"We all change. When you think about it, we're all different people, all through our lives. That's okay. That's good. You've gotta keep moving, so long as you remember all the people that you used to be. I will not forget one line of this. Not one day. I swear. I will always remember when the Doctor was me."

Aside from being a lovely and touching wall-breaking final monologue for Smith on his way out the TARDIS door, this quote lines up directly with the core premise of the episode prior to this one, "The Day of the Doctor." That episode, the 50th anniversary special, inquired (more than had been done previously) about the Doctor's relationship with his previous selves.

The most poignant aspect of this - poignant, nearly to the point of painful - was the concept of the War Doctor (John Hurt), a part of the Doctor's past about which he is so particularly ashamed that he has removed it completely from his overall narrative, except as an end-state: he killed all the Time Lords. The how, or more to the point, the Who, of that act of genocide has been left out of the picture. Till now.

"The one who regrets, and the one who forgets," Bad Wolf described Doctors Ten and Eleven in that episode; and with "The Day of the Doctor" taking place at the zenith of Matt Smith's custodianship of the character, it is upon the latter - "the one who forgets" - that the point is made. Moffat is attacking the fifty-year-old character of the Doctor from its Jungian aspect at last: one cannot be a whole, complete person without undergoing the process of individuation, the total integration of the components of the self.

It's an irresistible science fiction opportunity: here is a man whose components of the self are literally multiple people. The Doctor doesn't just contain multitudes; as the final shot of "The Day of the Doctor" reminds us, he's a squadron of selves all on his own. The Doctor as metaphor allows Moffat and his writers to articulate some core requirements of the whole human condition: the processes by which we harmonize, or demonize, our own narrative, and thereby our own selves.

The Doctor, ever wise and benevolent, perhaps seemed to be beyond this sort of pesky psychological referendum; but in denying the War Doctor, he was both metaphorically and literally killing his entire species, and therefore himself. Only by accepting, and even embracing, the part of himself that committed the greatest atrocity of his whole life - wiping out the Time Lords to end the Time War - can the Doctor move forward. The reason we know this is the point is, of course, that by doing so, the Doctor saves all the Time Lords, too.

The season has played repeatedly with plural selves. Beginning in "The Snowmen," last year's (outstanding) Christmas special, it furnished the Doctor with a new Companion who, herself, seemed to be a confusing multiplicity of characters: Clara, the Impossible Girl. She's "impossible" because she infiltrated two, and then three, of the Doctor's adventures as completely separate individuals, dying over and over again, like an army of clones.

Skipping back a bit, to Clara's first outer space adventure following her reintroduction, "The Rings of Akhaten," the Doctor stops to deliver what is likely the season's secondary premise, all in one beautiful rush of dialogue to a frightened little girl:

"Hey, do you mind if I tell you a story? One you might not have heard. All the elements in your body were forged many, many millions of years ago in the heart of a far away star that exploded and died. That explosion scattered those elements across the desolations of deep space. After so, so many millions of years these elements came together to form new stars and new planets. And on and on it went. The elements came together and burst apart forming shoes and ships and sealing wax and cabbages and kings. Until, eventually, they came together to make you. You are unique in the universe. There is only one Merry Gejelh and there will never be another. Getting rid of that existence isn't a sacrifice, it is a waste!"

Many people have problems with "The Rings of Akhaten," but I think it's one of the strongest episodes of the season, a rigidly on-theme exploration of why the Doctor does what he does and, to the point expressed in the quote, why and how every single person - every single self - is important, unique, and beautiful.

Here, as usual, the Doctor is directing this belief externally; the trick of the remainder of the season will be how Moffat turns the theme inward, towards the Doctor, for the first time. "The Day of the Doctor," aside from being the 50th anniversary special (or perhaps because of it), is unique in one significant way: it's a rare episode that is about, entirely, the Doctor himself. It's the Doctor who is the heart of the problem-of-the-week, the Doctor who needs saving, the Doctor who feels hope stir when the TARDIS makes its groaning, wheezing noise.

The fact that the Doctor ultimately saves himself - aided substantially by Clara and Rose, of course, as two iterations of his bleeding and broken conscience - is the beauty of "The Day of the Doctor" and of the season as a whole. It scatters the Doctor into three onscreen incarnations (Smith, Tennant and Hurt) and then lets them all have it out with each other - the one who regrets, the one who forgets, and the one (per Clara's keen observation) who's done nothing to earn those sadnesses yet. The Doctor, ever compassionate, learns to treat himself with compassion and forgiveness, too; and in so doing, unlocks the door to his future. As if in reward, Tom Baker even turns up: the self, reunited with all the old favourites.

This lands us in prime position to enter "The Time of the Doctor," where Eleven finds a town called Christmas under siege by every enemy he has ever faced, and does something else the Doctor never (well, rarely) ever does: he plants stakes and stays put, defending the town against incursion until the Doctor himself is well into doddering old age. The self has been found, the purpose realigned, and with nothing but the specter of death before him, the Doctor makes the choice we all must face: Who to be, when "The Time" comes.

And so, in a flash of regenerative light and a twinkling return of lost loved ones, seconds before death, Eleven passes on - but not before he delivers the speech with which I opened this column. He promises Clara, the audience, and himself that he will never again forget all the pieces of his self that make him who he is. The music repeats the "Long Song" refrain from the score of "The Rings of Akhaten" to reinforce the point: he is unique in the universe, and so are we all.

Do you feel this content is inappropriate or infringes upon your rights? Click here to report it, or see our DMCA policy.
Doctor WhoMatt SmithThe Time of the Doctor

More about Doctor Who: Series Seven