Ambulante is Mexico's traveling documentary film festival, founded by Gael García Bernal, Diego Luna and Pablo Cruz. To be celebrated from January 30 to May 4, 2014 in twelve states of the country, the ninth edition of this fantastic festival is revealing little by little its content and so far everything looks quite promising.

The lineup of the sections Retrospective and Sonidero (focused on music docs) has been already announced. The first one will be dedicated this time to Martin Scorsese's World Cinema Foundation, while such films as The Punk Singer and the classic Stop Making Sense are part of the Sonidero section. Also confirmed is the selection of documentaries for the Mexico City music festival Vive Latino.

In the gallery below you'll find details of all three announcements Ambulante has made. 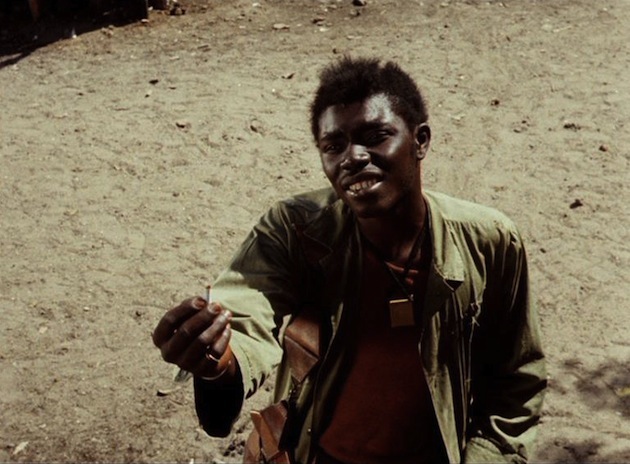 “A great work of hallucinatory, homemade expressionism and ecstatic beauty, Uday Shankar’s Kalpana (Imagination) is one of the enduring classics of Indian cinema. Shankar, the brother of the great Ravi Shankar, was one of the central figures in the history of Indian dance, fusing Indian classical forms with western techniques. In the late 30s, he established his own dance academy in the Himalayas, whose students included his brother Ravi and future filmmaker Guru Dutt (who worked as an assistant on Kalpana). After the closure of the academy in the early 40s, Shankar started preparations on his one and only film, many years in the making.” - World Cinema Foundation

“The beloved Moroccan band Nass El Ghiwane is the dynamic subject of this captivating musical documentary. Storytellers through song, with connections to political theater, the band became an international sensation (Western music critics have often referred to them as “the Rolling Stones of North Africa”) thanks to their political lyrics and sublime, fully acoustic sound, which draws on the Moroccan trance music tradition. Both a concert movie and a free-form audiovisual experiment, Ahmed El Maânouni’s Trances is cinematic poetry.” - The Criterion Collection

“Then came the revelation of Limite, the first and only film by 21-year-old director Mário Peixoto. This was a film of transcendent poetry and boundless imagination. Once again, I found myself in a state of shock, not only because of the film itself, which was made in 1931 and forgotten for many years, but also for the evidence it bore, that of our creative diversity.” - Walter Salles

“With a stunning mix of the surreal and the naturalistic, Djibril Diop Mambéty paints a vivid, fractured portrait of Senegal in the early 1970s. In this French New Wave–influenced fantasy-drama, two young lovers long to leave Dakar for the glamour and comforts of France, but their escape plan is beset by complications both concrete and mystical. Characterized by dazzling imagery and music, the alternately manic and meditative Touki Bouki is widely considered one of the most important African films ever made.” - The Criterion Collection

“In a rage, a teacher murders a boy. Another boy is bred, for one sole purpose: to avenge his brother’s death. Kazakh master Ermek Shinarbaev’s close collaboration with the Korean-Russian writer Anatoli Kim yielded three great films, the most remarkable of which is this beautiful, profoundly unsettling film. A true odyssey, geographically and psychologically. One of the greatest films to emerge from the Kazakh New Wave, and one of the toughest.”  - Kent Jones, May 2010

“Early in his career, the Austrian-born future Oscar winner Fred Zinnemann codirected with Emilio Gómez Muriel the politically and emotionally searing Redes. In this vivid, documentary-like dramatization of the daily grind of men struggling to make a living by fishing on the Gulf of Mexico (mostly played by real- life fishermen), one worker’s terrible loss instigates a political awakening among him and his fellow laborers. A singular coming together of talents, Redes, commissioned by a progressive Mexican government, was cowritten and gorgeously shot by the legendary photographer Paul Strand.” - The Criterion Collection

“On his journey, the director hears a story which he then asks people to continue as they wish— like a game of Chinese Whispers (and relating also to the French Surrealists’ concept of the “cadavre exquis”). The original title, Dokfah nai meu maan, roughly translates as Heavenly Flower in Devil’s Hand. The name of that flower, Dokfah, is also the name of the woman who appears in the story-within-a-film as the teacher of a young paraplegic boy. The title is reminiscent of an archetypical Thai melodrama, but in the hands of the most imaginative re interpreter of national tradition, it becomes an epic meta-narrative.” - The World Cinema Foundation

The Nigh of Counting the Years (Al Momia, Egypt, 1969) - Shadi Abdel Salam

“Momia, which is commonly and rightfully acknowledged as one of the greatest Egyptian films ever made, is based on a true story: in 1881, precious objects from the Tanite dynasty started turning up for sale, and it was discovered that the Horabat tribe had been secretly raiding the tombs of the Pharaohs in Thebes. A rich theme, and an astonishing piece of cinema.

The picture was extremely difficult to see from the 70s onward. I managed screen a 16mm print which, like all the prints I’ve seen since, had gone magenta. Yet I still found it an entrancing and oddly moving experience, as did many others. I remember that Michael Powell was a great admirer.

Momia has an extremely unusual tone – stately, poetic, with a powerful grasp of time and the sadness it carries. The carefully measured pace, the almost ceremonial movement of the camera, the desolate settings, the classical Arabic spoken on the soundtrack, the unsettling score by the great Italian composer Mario Nascimbene – they all work in perfect harmony and contribute to the feeling of fateful inevitability. Past and present, desecration and veneration, the urge to conquer death and the acceptance that we, and all we know, will turn to dust… a seemingly massive theme that the director, Shadi Abdel Salam, somehow manages to address, even emobody with his images.

Are we obliged to plunder our heritage and everything our ancestors have held sacred in order to sustain ourselves for the present and the future? What exactly is our debt to the past? The picture has a sense of history like no other, and it’s not at all surprising that Roberto Rossellini agreed to lend his name to the project after reading the script. And in the end, the film is strangely, even hauntingly consoling – the eternal burial, the final understanding of who and what we are… am very excited that Shadi Abdel Salam’s masterpiece has been restored to original splendor.” - Martin Scorsese, May 2009 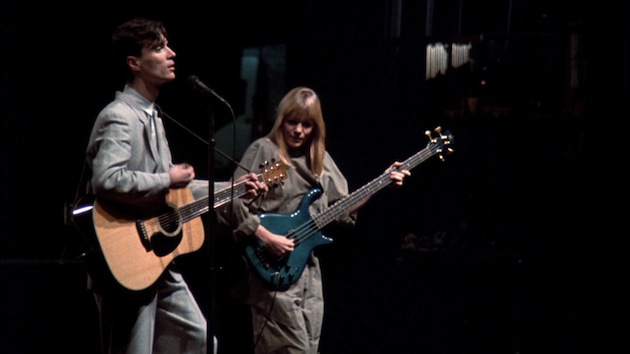 “For those not in the know, the town of Muscle Shoals was home to (at least) two of the most important studios for American R&B music. This is where Aretha found her sound, where a series of bands made up of mostly white guys would play the most solid, heavily grooving sounds that would make up this golden age of Soul music. Yet the story of Muscle Shoals is far greater than just what Ertegun and Wexler brought with them after a falling out with Memphis' Stax, for in the rarefied walls and jukejoints of the surrounding area developed a sound that would resonate for decades to come.” 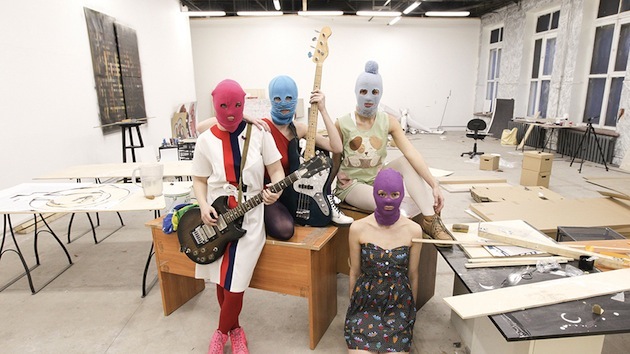 The music festival Vive Latino 2014 will be celebrated in March at Mexico City’s Foro Sol, with such acts as Nine Inch Nails, Arcade Fire, Placebo and Emir Kusturica & the No Smoking Orchesta performing.

For the fourth consecutive year, Ambulante is curating a documentary selection at the huge Vive Latino, inviting famous musicians to talk about film, offering most of the Sonidero section plus other docs not really music-related and even favorites from past editions (Exit Through the Gift Shop for example). The complete lineup is the following:

“On February 21st, 2012, a group of four women, clad in brightly-colored dresses and similarly brightly-colored balaclavas, took to the altar of Christ the Savior Cathedral in Moscow and attempted to perform a protest song challenging the collusion between church and state. They were quickly arrested and thrown in jail, but not before becoming a cause célèbre for anti-Putin/anti-establishment groups around the world.”

“For those not in the know, the town of Muscle Shoals was home to (at least) two of the most important studios for American R&B music. This is where Aretha found her sound, where a series of bands made up of mostly white guys would play the most solid, heavily grooving sounds that would make up this golden age of Soul music. Yet the story of Muscle Shoals is far greater than just what Ertegun and Wexler brought with them after a falling out with Memphis' Stax, for in the rarefied walls and jukejoints of the surrounding area developed a sound that would resonate for decades to come.”

Documentary about the making of the latest album from Mexican rock band Café Tacvba.

Do you feel this content is inappropriate or infringes upon your rights? Click here to report it, or see our DMCA policy.
Ambulante 2014Martin ScorseseSonideroVive Latino 2014World Cinema Foundation