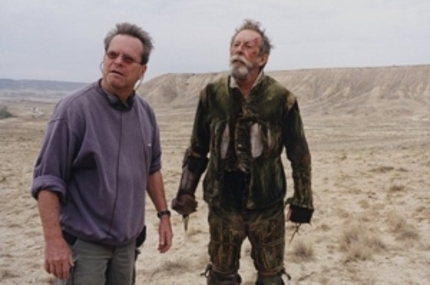 An article on The Playlist suggests that Terry Gilliam might attempt, for the seventh time, to make his dream of a film version of Cervantes' daunting novel, Don Quixote, a reality. The documentary on the subject, Lost in La Mancha, showed a lot of Gilliam's vision (as well as the difficulties that can haunt an auteur), and apparently it's a story that just won't let him go.

On the surface, this film would seem like a no-brainer: based on the most famous Spanish novel of all time, translated into countless languages with no end of readers, on many high school reading lists, a great costume drama with great landscapes and sword fights, giants, two fantastic roles in Quixote and his sidekick, Sancho Panza.
And Gilliam, with his penchant for grotesque and black humour (hallmarks of Spanish literature) seemed a perfect fit as director. But as those who have seen the documentary know, the production was fraught with problems, some financial, some production, some creative. Granted, as the documentary points out, it is a dense novel, with incredible detail, and is a daunting task for any filmmaker, even one as adept at fantastical tales such as Gilliam.

At this time, it seems to be just an attempt, and as yet there is no word on any forthcoming financial backing. Gilliam's last film, The Imaginarium of Doctor Parnassus, was fairly successful internationally, though it failed at the US box office (and also had its share of problems). But overall, he has a good track record with most of his films.

British author Doris Lessing (who sadly passed away yesterday) once said, "Whatever you're meant to do, do it now. The conditions are always impossible." This could be Gilliam's motto. His return to the Quixote project begs the question: should you ever give up, when a dream keeps haunting you? Should he turn to television (which seems more willing to take risks), as other great auteurs such as Steven Soderbergh and Jane Campion have done? Given his status as auteur and his huge fan base, should he turn to international financing, and could/would that be enough? Or is it time to put it to rest?

Personally, I would love to see Gilliam's version of the Quixote tale; he's the only director that could convey the madness, the carnivalesque, and the beautiful heart of the story. Let's hope the seventh time is the charm.

Gilliam should make it. Hopefully luck will be with him this time!

"An article on The Playlist suggests that Terry Gilliam might attempt, for the seventh time, to make his dream of a film version of Cervantes' daunting novel, Don Quixote, a reality. "

Never give up Mr Giliam, I´m still rooting for you.