Review: THE VISITOR Defies Logic With Excitement, Awe, And Mystery 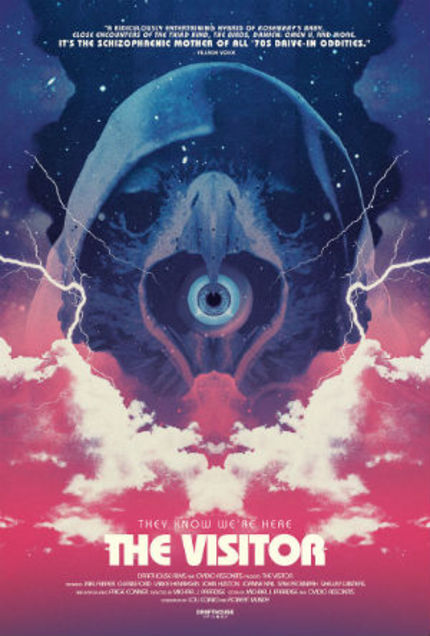 Holy cow, what a weird movie.

Instantly earning a place in my personal "WTF Hall of Fame," The Visitor is a work of cracked genius. Or, it's a very bad motion picture with flashes of accidental inspiration. Either way, it's too vividly imagined to be dismissed out of hand simply because it makes no narrative sense and appears to have been assembled by a crew of lunatics on a weekend bender.

Here is what I have gathered from a single viewing: John Huston is the titular character, who is not of this earth. He is very interested in young Katy (Paige Connor), a brat of a child with strong psychopathic tendencies. (As an example, when she accidentally shoots her mother, Katy shrugs.) On the other hand, Katy has great, indeterminate powers that make her 'a very special child.'

Meanwhile, a secret cabal of businessmen, led by Dr. Walker (Mel Ferrer) is very interested in Barbara (Joanne Nail), Katy's mother, who has "the genes of Satine," which allowed her to give birth to the powerful child in the first place. The cabal wants Barbara to have another child, a boy, so they can do whatever it is secret cabals do with children -- presumably, rule the world. To further this end, they have granted a man named Ray (Lance Henriksen) great wealth, allowing him to buy a professional basketball franchise in Atlanta, Georgia -- presumably, his riches have allowed him to capture Barbara's heart, but not her womb, which is all the cabal wants.

I can tell I'm losing you already.

Because recounting the plot is really besides the point. The Visitor is a bewildering collection of non-stop non sequiturs, moments that are snatched out of someone's brain with the gray matter still squishy and then splendidly and faithfully translated on screen, to no apparent purpose: Katy playing Pong on a projection TV, Katy speeding around an ice-skating rink cutting down boys for the sheer malevolent joy of it, Katy burbling nonsense to her murderous pet hawk, Katy speaking rudely and profanely to Glenn Ford -- ?! -- who appears out of nowhere as a detective of some kind, Katy sparring with Shelley Winters as a housekeeper, Katy playing endlessly with a motorized staircase lift, which surely must have a big pay-off, and on and on. Katy, who commits one act of violence after another, yet is never questioned seriously by any adult, save for the hapless Glenn Ford, who, well, let's just say his is a supporting role. Oh, come on!

Barbara, too, gets a fair share of bizarre moments. She must be among the most schizophrenic mothers ever portrayed on screen: she expresses concern about Katy's conduct, which makes her not want to have another child, yet quickly defends her when others point out her many (deadly) faults. Her sickly sweet smile suggests she may be on heavy medication, which would, at least, be something that makes sense. 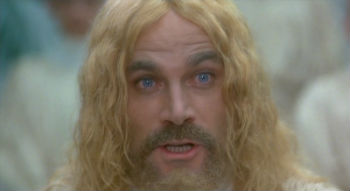 Then there's Franco Micalizzi's crashingly melodramatic musical score, ready to pounce on any tiny thing as though it were a very hungry and myopic tomcat. And the editing, which allows certain scenes to dawdle endlessly -- basketball, anyone? -- and others to end prematurely and then reboot.

It's all directed, evidently to the best of his ability, by Giulio Paradisi (credited as Michael J. Paradise), who made two other films before this one and two afterwards. His key credit, though, may be his service as an assistant director on Federico Fellini's 8 1/2. Perhaps that experience rubbed off on him?

Also, I wonder how well any of the Italian crew spoke / understood English. This was the time period when Italian productions cobbled together cast members with name recognition from across North America and Europe, and perhaps that would help explain why so much of the story appears to have been lost in translation.

The movie is so daft, however, which is definitely not the same thing as bad, that it generates an endearing, pleasing sense of tension because there is no telling where it is going and how it intends to get there. Is it the Apocalypse? Is an alien invasion imminent? Is the business world about to fall apart completely? Will the authorities ever catch on to a ticking time bomb of a child? Will anyone notice those strange uniformed fellows on a rooftop? Why is director Sam Peckinpah acting in this movie? What happened to Franco Nero and his gorgeous blue eyes?

This is the excitement, the awe, and the mystery of The Visitor. Somehow, it escaped, briefly, into the cinematic universe in 1979, and it is once again available to watch in limited engagements at Alamo Drafthouse locations throughout the United States. Miss it at your peril. Your intellect may slap you, but your emotions will kiss you all over for this warm, invigorating bath of confusing, compelling, incoherent, irreducible, unforgettable, horror/sci-fi melodrama.

The film is now playing in select cities in the U.S., including Austin, Dallas, Houston, and Yonkers, NY. It opens in Manhattan at the IFC Center on Friday, November 8, and will be rolling out to additional cities throughout November and the rest of the year. Visit the official site of Drafthouse Films for more information.

THE VISITOR [Trailer] - Now In Theaters from Drafthouse Films on Vimeo.

Do you feel this content is inappropriate or infringes upon your rights? Click here to report it, or see our DMCA policy.
Franco NeroJohn HustonLance HenriksenMichael J ParadiseShelley Winters

More about The Visitor