Review: PHILOMENA, The Transformative Power Of Raw Anger And Anguish 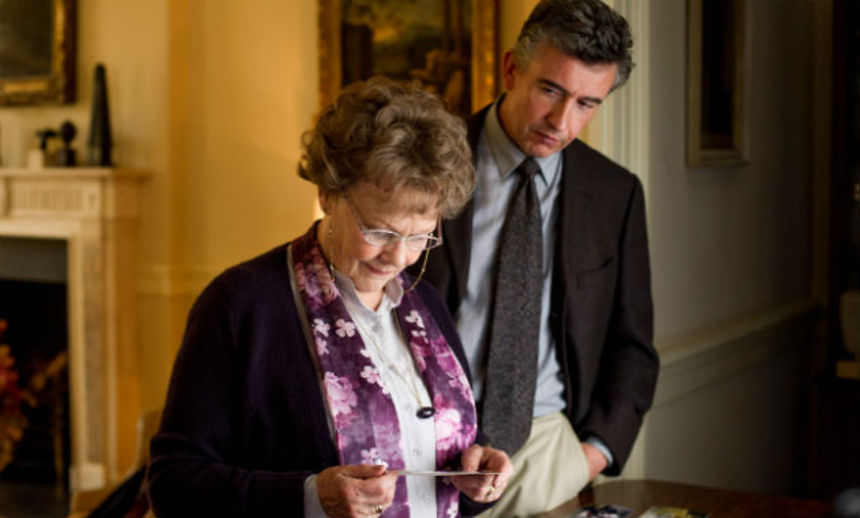 I was taught to control my emotions, to tamp down anger when it flared up, to empathize with the other person, and to avoid hurting anyone's feelings, which may explain why I sided so quickly with the titular old lady rather than the whip-smart writer.

Raised as a good Catholic in Ireland, young Philomena (Sophie Kennedy Clark) fell for a young, good-looking fellow, and got pregnant in the early 1950s. She was sent to live in a convent, where the nuns took her in but required her to work hard for four years to make up for her "sin" and repay their "kindness." Before her time was up, she watched helplessly as her child was given up for adoption by the nuns. Now a woman of mature years, she harbors a reservoir of guilt and regret for giving up her son, and yearns to be reunited with him. But her efforts to find him over the decades has proven fruitless.

As played by Judi Dench, Philomena is a kind, modest woman with unrefined tastes. She is quick to forgive and make allowance for the shortcomings of others, being well-aware of her own limitations. (She puts into practice the things I was taught as a boy but too often forget as an adult.) She doesn't want for anything, except to make amends with her long-lost son.

Philomena's story catches the attention of a cynical, hard-bitten journalist named Martin Sixsmith. Martin became a political fixer, a second career that went down in flames, and he is still nursing his wounds as he endeavors to follow his true passion: researching and writing about Russian history. Human interest is not his thing, not at all, but like any freelancer, he is willing to hold his nose if it means staying out of debtors' prison, so he reluctantly pursues Philomena's story at the encouragement of a tabloid editor who is willing to pay good money for the story, as long as it has an ending that's either terribly tragic or really, really happy. 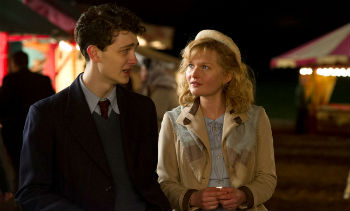 As played by Steve Coogan, Martin is sharp-eyed and thick-skinned. He keeps his cards close to the vest, but his involvement with the story and his appreciation of Philomena's experience grows steadily.

At first, he can't help but feel superior to the country lady with little breeding or education; it's all he can do to keep from rebuking her for her foolish actions and beliefs. Yet he manages to restrain himself because it wouldn't be polite to do otherwise. Also, he very much wants to please his editor and thus secure payment for his work.

Not too far below the surface, however, Martin has collected his own pool of emotions, mostly consisting of resentment over the recent loss of his high-profile career and its attendant perks. Added to that are the conclusions that he draws about those who are most blame-worthy for what happened, which gives rise to a simmering, righteous fury. Together, the two unlikely companions endeavor to track down the son who got away, propelled by their oddly complementary fuel: Martin's anger and Philomena's anguish.

Which fuel will prove to be the most effective, the most lasting, the most transformative in each of their lives? The filmmakers leave the answers open-ended, to be filled in by the viewer, with the knowledge that real-life events inspired the real-life Martin Sixsmith to write a book, The Lost Child of Philomena Lee, and that events do not play out as one might expect.

Coogan, who is credited along with Jeff Pope for the screenplay, gives a nicely-restrained performance, without exaggerations or any hint of comic effects. Dench disappears into her role, allowing her eyes to betray the liquid-quick changes in her personal temperament. With good material and committed actors to work with, director Stephen Frears steers the material away from clear waters of easy sentimentality and toward charged-up, stormy weather that requires his delicate touch at the helm. It feels like a very personal film for him as well.

Filled with wry humor and recognizable human behavior that resonates over a period of decades, Philomena is a warm, well-measured, and well-told story that has the ring of truth.

The film opens in select theaters in the U.S. on Friday, November 22, and will expand into many more theaters on Wednesday, November 27. Visit the official site for more information.