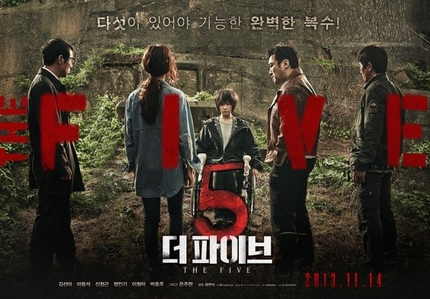 Aside from the greats of Korean cinema - the Bong Joon-hos, Lee Chang-dongs, Im Kwon-taeks and Kim Ki-youngs - years ago, after I first immersed myself in the country's cinema, there were few things that I preferred doing than putting on a mid-level Korean genre film after a long day. Their thrillers, in particular, weren't always great (in fact a number were bad) but their production values and hard-boiled style were always a wonderful escape for me, even, strangely, a source of comfort. These days the industry still churns out a great number of thrillers, and though many are very strong, they're a different breed from those I would wile away my time with back in those days.

Unexpectedly, I found that feeling again when I sat down to watch new the Korean film The Five. Besides knowing it was a thriller based on a webcomic and recognizing a few familiar Korean supporting actors, I really didn't know anything about it beforehand. However, within minutes I was whisked right back to that familiar experience. Lacking ambition, the film never threatens to explore any new territory but it's such a fun ride that this never works against it.

Eun-a is a happy wife and mother until one fateful day when her family is brutally and senselessly murdered by a sociopathic young man, while she ends up in a wheelchair. Two years later, following a long search, she hones in within striking distance of the killer. She then enlists the help of four people, all in desperate need of organ transplants for their loved ones.

Just a quick glance of that synopsis is all you need to realize that The Five is gunning hard for Korean-style revenge thriller territory. A vengeful woman who has lost her family, organ donors and a fresh-faced serial killer, all the typical elements associated with the genre are right there from the outset. What's more the film pays significant homage to a number of past thrillers, such as Princess Aurora (2005) and 26 Years (or maybe the Kang Full webcomic it was based on), but especially Park Chan-wook's revenge trilogy. Among the trilogy, Lady Vengeance (2005) in particular is singled out. Not only are certain plot points reminiscent but similar music is employed and some specific camera/editing techniques are reused.

Ever since Sympathy for Mr. Vengeance (2002), if not earlier, organ harvesting has been frequently employed as a deus ex machina in Korean thrillers. Given how horrific it is, the sympathy it elicits from the audience and its ability to convincingly turn protagonists towards extreme ends, it's no wonder that it has been such a popular plot device with Korean screenwriters. Examples from the last few years include The Man From Nowhere (2010), Heartbeat (2010), Barbie (2011) and last year's Traffickers. Its use in The Five is more contrived than usual but then again it's probably just poking fun at the fact that it is such a prevalent narrative trope.

There's a fine line between homage and lifting and this razor thin barrier is the ground on which The Five operates. The film is an unabashed throwback to Korea's renowned revenge narratives that only occasionally offers its own take on the subgenre but it's presented in such a slick and easily digestible manner that one can look past the fact that there is nothing going on beneath the surface.

Following a run of successes in the mid-2000s, such as S Diary (2004) and She's on Duty (2005), lead actress Kim Sun-a has mostly opted for the small screen in recent years. Her big screen return in The Five, in which she shoots people down with her cool, cold stares, is a welcome one if not overly demanding. Still, she is a good fit for the role, playing her part straight, with just enough of a hint of irony. Joining her is a stable of competent supporting players, including Ma Dong-seok (Neighbors) as a gruff ex-gang member and Jung In-gi (The Tower) as an anxious doctor. As the cool and composed killer, Oh Joo-wan (The Taste of Money), flashing cocky grins and striding around non-chalantly, is the most blatantly caricatured member of the cast, but in a film with such clearly drawn parameters, he more or less fits in.

Debut director Jung Yeon-sik adapted The Five from his own webcomic, entitled 'The 5ive Hearts,' which ran on Korean portal site Daum two years ago. Having not read the original I can't say how close this comes to it but Jung seems in absolute control of his material, comfortably navigating well-mined genre tropes and delivering a satisfying romp, nicely tweaked with injections of humour, horror and the odd surprise along the way.

Though derivative and almost hackneyed, Jung's film succeeds much in the same way some of the best mid-level film noirs worked in the 40s and 50s. It's a showcase of style over substance that doesn't pretend to be more than it is and recognizes what works best in the Korean revenge thriller subgenre. Unapologetically straightforward and treading a well-worn path with tongue-in-cheek aplomb, The Five is a very good time.

Do you feel this content is inappropriate or infringes upon your rights? Click here to report it, or see our DMCA policy.
2013jung yeon-sikkoreakorean cinemarevenge thrillerthe fivewebcomic더 파이브