Review: LAST VEGAS, Elevated By Actors Who Earn Their Money The Old-Fashioned Way 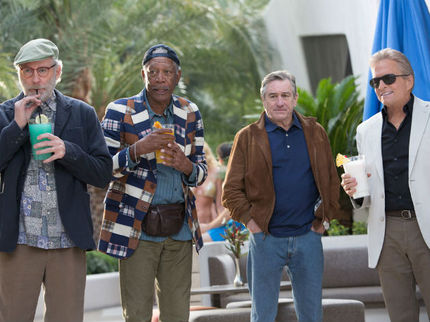 Genial and amiable though it may be, the comic fantasy world of Last Vegas would barely be worth visiting were it not for the presence of its leading players. Michael Douglas, Robert De Niro, Morgan Freeman, and Kevin Kline are all senior citizens, past the age of 65, yet one might question their wisdom for participating in what appears to be an unofficial spin-off of The Hangover, sanitized for general audiences.

The script is by Dan Fogelman, a jokester whose screenplay for Crazy. Stupid. Love. was once described as "fuzzy-headed and conventional, something you'd expect from a writer whose credits include the animated Cars, Bolt, and Tangled. The characters are not smart, modern 'toons, but the variety that populated 60s US TV shows in sub-moronic abundance. The jokes are broad and/or corny; some of the wisecracks are funny, but there's no rhyme or reason for what lines work and which don't." The description is mine, and, two years later, I find the same words may be cut and pasted to illustrate the root flaws in Last Vegas.

What, then, makes this movie more than tolerable? Director Jon Turteltaub is a journeyman who has anonymously helmed two uneven box-office smashes over the past 20 years (1995's While You Were Sleeping and 2004's National Treasure), and here can be credited only for staying out of the way of Douglas, De Niro, Freeman, and Kline. They know their way around a joke. They are talented professionals who can summon forth sincere conviction at the drop of a hat. They have never worked together before.

Those are the minimum requirements for roles such as these, childhood friends who grew up together in Brooklyn and then grew apart. (No mention is made, by the way, of the most outstanding facet of their friendship, which is that it is color-blind, something that surely would not have gone unnoticed in 1950s New York.) Facing the sunset of their lives, and feeling vague dissatisfaction with their lot, they leap, figuratively speaking, at the chance to reunite when one of them announces his impending marriage to a much younger woman in Las Vegas.

When they are together on screen, they perform a magical dance, something like a well-rehearsed choral group. They toss off the requisite wisecracks, jibes about old age, and mildly profane insults with practiced jitterbug rhythms. They go beyond what is required, however, to listen when another is speaking, and reacting appropriately. In those moments, they are not delivering lines from a script, they are old friends who are genuinely interested in hearing what the other person has to say. Their reactions are not out-sized spit-takes; more often than not, they are indicated with the merest facial gesture or change in body language.

Naturally, they each have a dramatic moment to shine, to speak some Momentous Truth as imagined by the screenwriter, but even in those scenes, the actors underplay, as though they were experiencing the moment for the first time. De Niro expresses his frustration with another character as though he had it stored up for decades; Kline declines a sexual opportunity (as we know he must) with genuine regret; Douglas acknowledges his own foolishness; Freeman dances like, well, an old man, delighted to be in the spotlight while realizing his footwork can no longer match his imagined abilities.

As a bonus, they sometimes get to act opposite Mary Steenburgen, an age-appropriate lounge singer who is little more than a well-tuned plot device. As with the other leading players, she never gives any hint that she is slumming, never overplaying her hand.

Stitched together, and performed by actors who earn their money the old-fashioned way (by acting), these moments elevate the material, as though it were an ill-fitting suit worn by a man of grace and elegance. You forget the suit and remember the man. Such is the case with Last Vegas: you forget the movie and remember the actors.

The film opens at theaters across North America on Friday, November 1. Visit the official site for more information.

Do you feel this content is inappropriate or infringes upon your rights? Click here to report it, or see our DMCA policy.
Dan FogelmanJon TurteltaubKevin KlineMichael DouglasMorgan FreemanRobert De NiroComedyRomance