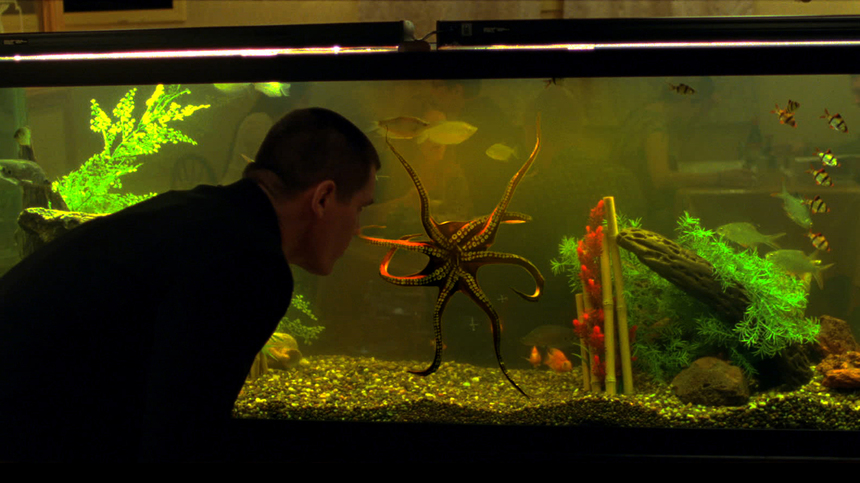 Controversy has followed the US remake of the classic Korean psychodrama, Oldboy, since its proposal years ago. I had a few words with screenwriter/co-producer Mark Protosevich, who has been along for the film's entire ride from Will Smith and Steven Spielberg to Spike Lee.

The Lady Miz Diva:  What were the important points you had to keep from the original film and manga?  The irreplaceable moments?

Mark Protosevich: The core story is you've got this incredibly intriguing concept of the imprisonment; of being in this room and not knowing why. And then being confronted by someone who you have no idea who they are, and then learning that they've done this to you, and then you are put in this situation where you have to figure out why. That core, basic framework, that's the most intriguing thing and that's absolutely essential.

You know there are certain things in the original and the manga, certain elements that we definitely wanted to keep - specifics - and then there are certain things that I felt there's room for change, and I think some of that has to do with cultural perspective. There are definitely elements in the original film and of the manga that echo the society that they were created in and I think some of those elements would not be easily accessible or relatable to a mass Western, American, English-language audience.
Also, I think that a film should be relatively reflective of the culture that it's created in, so I wanted this to be a more American story and characters that were relatable to people we see around us every day. Aside into getting into specific scenes and certain things, it's more about a philosophy than anything.

LMD:  How long have you been attached to this project?

MP:  I've been involved - almost to the day - five years.  It was almost five years to the day that I got a call from Will Smith saying, "I want you to write my next movie, it's a remake of Oldboy. Steven Spielberg wants to direct it. Can you come out and meet Steven?"

MP:  You don't get that call every day, believe me. So, for a year, that was the creative pair that explains my involvement and that was what I thought was going to happen. During the course that first year, I'd written a 30-35-page, very detailed treatment of the movie. I'd become really invested in it, and then it completely fell apart. Spielberg pulled out and because of that, Will pulled out.
You have many soul-crushing days as a screenwriter - that was a particularly bad one.  Because I had become so attached and invested and the producers still wanted to make the movie, even though there was nobody attached; I was so involved at that time, I said I want to continue, to the point where I said, "If you like what I do, I want to be a co-producer on the movie and be as involved as I possibly can." Luckily, they liked the script and then I was on the set during the production and that was a great experience and the producers and the studio and Spike [Lee] were all incredibly supportive as my being as involved as I possibly could.

LMD:  Did the script change very much from starting as a Will Smith/Steven Spielberg project to winding up as a Spike Lee Joint?

MP:  You know, it didn't really change at all. I didn't actually write a version of the screenplay for Will and Steven, but I wrote that treatment. Essentially, that treatment, if you've read it, is pretty much the movie that you see - maybe about 80 percent. What I always say, is when you're writing, [for] any screenwriter, the first draft should be the version that [you] want to see. Because they can always ask you to change stuff, but nobody's ever going to let you put back in stuff that you held back. I was writing the version of the movie that I wanted to see and in that sense, it really didn't change.

MP:  I mean, look, I'd be lying if I didn't acknowledge that there are a lot of people out there, very devoted fans of the original that sort of regard this version as some sort of an act of blasphemy. All I can say is that we really came from a place of honor and respect. I love the original and I understand their reaction. I mean, there are certain films that if I heard they were going to remake, I would be upset, but I think what I really want is just for people to keep an open mind.

I think even I've come to a point where I want to be open. I mean, there's a Japanese version of Clint Eastwood's Unforgiven. I'm curious about that. I'm curious to see how a film might be translated by a director from a different culture. I think I'm a little more forgiving about that, so...  The other thing I would say is people who do feel strongly about that; there's nothing I can do or say that's going to change that opinion. It's pretty much a fundamental belief and there's no arguing really with a fundamentalist. [Laughs.]
All I would say is that I hope they would give us a shot and maybe keep an open mind. And the other thing I always say it's not like the original film is going to go away. They'll always have the experience of seeing it. Our intention -- anybody who thinks we were doing this as an exploitation and a way to make a quick buck; show me anybody who would watch that original film and go, 'Oh boy, an English version of this is going clean up at the box office.'

Certainly, we want the movie to do well, but everybody who was involved in this went through it because they really cared.


Oldboy will open in U.S. theaters on November 27.