Exclusive: Trailer For THE TORRENTE PACKAGE Raises Repulsive And Sleazy To A New Comic High 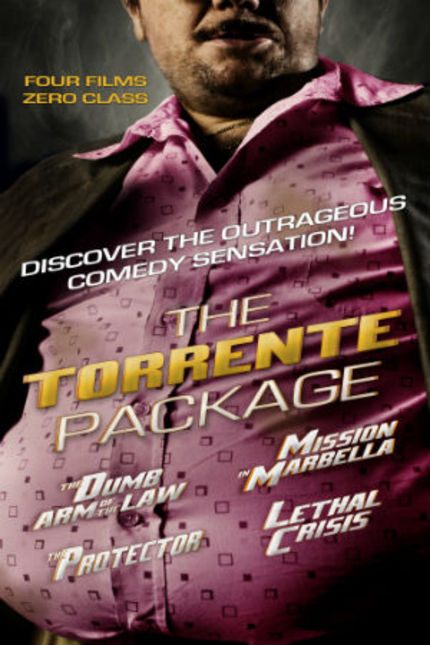 Ah, Torrente. The Spanish cult icon, created and played by Santiago Segura, has gathered a following from around the world -- including filmmaker / contrarian Oliver Stone -- with his comic antics, but is largely unknown in the U.S.

Doppelgänger Releasing aims to change that by making all four films featuring the character available for home viewing. From their official statement:

The quartet of movies in the Torrente Package -- Torrente: The Dumb Arm of the Law (1998), Torrente 2: Mission in Marbella (2001), Torrente 3: The Protector (2005), and Torrente 4: Lethal Crisis (2011) -- are each written and directed by Segura, who also stars as the repulsive, sleazy and frequently drunk "Torrente." An ex-cop who refuses to accept his expulsion from the police corps, allowing him to still "patrol" each night in his beat-up car in order to "fight" whom he considers to be the "bad guys," Torrente usually refuses to confront real criminals due to his own cowardice. But not to worry -- there are plenty of innocent bystanders for him to wreak havoc upon! Through his reprehensible but undeniably alluring character of Torrente, Segura takes no prisoners, taking aim at left, right, and center; the young, the old; the rich and the poor; and just about everyone in between.

The four films will be available on digital streaming platforms on December 17. Watch an exclusive trailer below that teases Torrente in all his glory, and plan ahead for holiday viewing.

Do you feel this content is inappropriate or infringes upon your rights? Click here to report it, or see our DMCA policy.
Lethal CrisisMission in MarbellaSantiago SeguraThe Dumb Arm of the LawThe ProtectorCarlos ArecesGoyo JiménezJavier GutiérrezActionComedyCrime