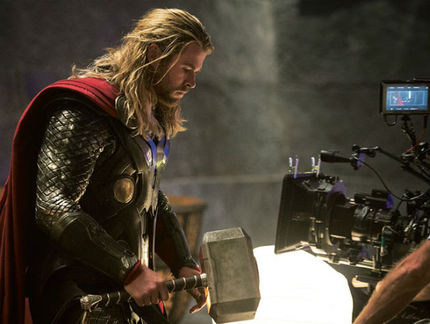 There's been no shortage of Marvel news lately.

Phase Two is trucking along with the release of Thor: The Dark World (including a dispiriting first glimpse at next summer's Guardians of the Galaxy); Marvel's Agents of S.H.I.E.L.D. barrelling headlong towards the completion of its back-nine order for Season One; a rousing trailer for next spring's Captain America: The Winter Soldier; and last week, the announcement that Marvel and Netflix will collaborate on four (!) television series, and one mini-series, around the "smaller scale" heroes of New York City - Daredevil, Iron Fist, Luke Cage, and Jessica Jones.

In terms of Disney's wholesale purchases of mega-franchises, Marvel is as hot as it gets right now. (Five years from now, Star Wars will be just as proliferate.) From a marketing and promotions standpoint, the machine is working perfectly. Marvel Studios continues to pop two big-screen soufflés out of the oven on an annual basis, and having perfected that assembly line, they're free to expand their reach into other strategic partnerships, gobbling up mindshare on network and streaming television as well.

This is the way the system is designed to work, a consumer enterprise at the height of its game, which has both defined the demand and perfected the supply. In the mechanics of its output, though, we can sense the boundaries of Marvel's game, causing me to wonder what will happen when one of their competitors - Fox or DC - catches up. If there's a risk to what Marvel Studios is doing right now, it's simply in its manifest lack of risk. For all the boundary-jumping innovations with the genre that put Marvel in this position (Thor; The Avengers), the road ahead looks like plenty more of the same.

In this, the studio's gormless Agents of S.H.I.E.L.D. television series is probably the best example. It is the first time the studio has clearly marked its ambitions as being directed towards a painfully mainstream audience. There's nothing "interesting" about S.H.I.E.L.D., by which I mean less that the show is boring than that the show is utterly without anything weird or unique to set it apart from, say, N.C.I.S. or C.S.I. Maybe if you have to stop to insert periods in frequently-used words when writing your show, the creative mind goes out the window.

In its distinct lack of distinctiveness, the difference between Joss Whedon, Jed Whedon and Maurissa Tancharoen's previous series, Dollhouse, and their current one, S.H.I.E.L.D., become obvious.

Dollhouse was so replete with genuinely (and often unfathomably) unique elements that it was literally a show that had no idea what it was talking about, a two-season run of near-misses around an idea that, if frustrating, was ultimately as fascinating a television property for analysis as any of the coherent and successful series running against it.

S.H.I.E.L.D., on the other hand, with its core cadre of pretty white twentysomethings running bargain-basement international missions borrowed from Alias but featuring sub-X Files monsters of the week, is - in its six episodes so far - one of the least memorable television series, for its particulars, since the '80s reboot of Mission: Impossible. I've got a small flow-chart on my iPad that lets me keep track of the characters' names, but aside from "Ming-na Wen is awesome" and "Clark Gregg should stop smiling," I rarely come away from an episode with a note provoking any deeper investment.

Nor, I think, am I supposed to. I am beginning to suspect that S.H.I.E.L.D. is the Dempster's White Bread of current popular entertainment, the one you're not supposed to tell your mom you bought because she'll give you sixteen different reasons why it's completely worthless. Dempster's sells great, precisely because it's so blandly anonymous; and so does S.H.I.E.L.D., for the same reason. It's not intended to upset the apple-cart via any genre deconstruction or genuine creativity; firmly in his Executive Consultant position at Marvel, one imagines that Joss Whedon has learned the lessons of his previous series' popular failings, which is that screwing around with audience expectations buys you hardcore fans and no money. S.H.I.E.L.D. is here to keep the home fires burning without ever roaring into a blaze, and it does that by never pushing its audience in any direction they might find indigestible. Say what you want about Dempster's White Bread: it's digestible.

All of this became transparent to me while watching the grand, hollow Thor: The Dark World this weekend, which is about as great a sequel to 2011's Thor as one could hope to imagine, were one to imagine a sequel that does nothing besides bring more of the same of what worked the first time. The Dark World is far and away the high water mark of Marvel's output from a physical production standpoint: it is a beautifully designed, and executed, fantasy world; a comic book universe writ large (and in 3-D). Thanks to Kenneth Branagh's keen casting sense on the first film, a crackerjack ensemble of unique and varied actors (from stalwartly charming Chris Hemsworth down to goofball wiseass Kat Dennings, with fierce Rene Russo in between) act out a mad genre story about gods, realms, and inter-dimensional fistfights.

It's boring as hell to watch, of course, because Marvel is no longer spending the big bucks on their directors. To make Phase One work, they needed the Branaghs, the Favreaus, the Joss Whedons - talented filmmakers slightly below the A-grade, who had something to prove for one reason or another, and thereby had the wherewithal to work hard at the conceptual and logistical gymnastics required in setting up the Marvel Cinematic Universe.

For Phase Two, Marvel has two properties from TV directors (three if you count The Avengers: Age of Ultron), and two from mid-tier journeymen with respectable, if hardly astonishing, filmographies. Taylor, Black, the Russos, and Gunn aren't here to innovate with the form; they're here to work very carefully within it. It's a return to Old Hollywood production dynamics, where the studio is making the movie, and the director is overseeing the day-to-day work of filming. The results are glossy as hell and might occasionally even exceed expectations (I'm not counting the Russo brothers out yet), but they work in-market precisely because of their Old Hollywoodness. The audience gets exactly what they want, no more, no less.

This era of "good enough" filmmaking in the genre/franchise frame is the natural extension of everything that Disney-style mega-franchising inherently requires: enormous budgets; clearly definable value propositions; easy export to foreign markets; and above all, Dempster's White Bread-style digestibility for as many audience members as possible. It will become boring, and it will do so approximately a year and a half before Disney shareholders expect it to. Until then, though, it's going to make those shareholders a fortune.

Do you feel this content is inappropriate or infringes upon your rights? Click here to report it, or see our DMCA policy.
Joss WhedonMarvelMarvel's Agents of S.H.I.E.L.D.Thor: The Dark World