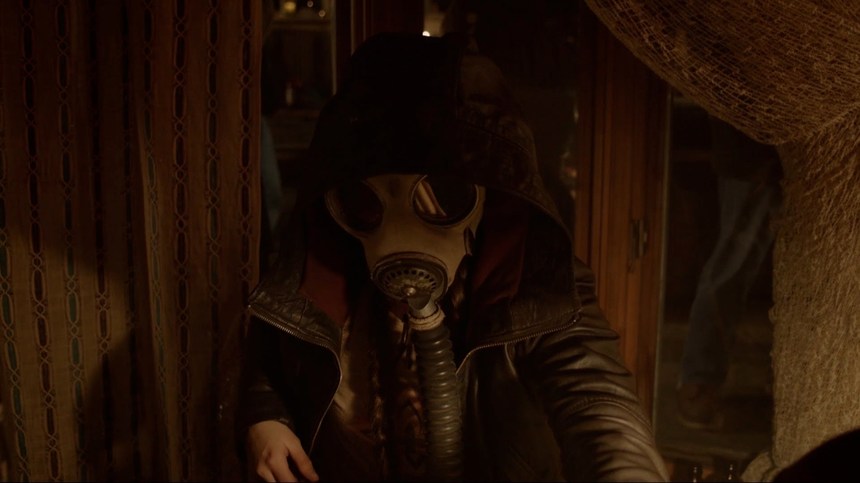 Between Wolf Children and Summer Wars, Mamoru Hosoda is establishing himself as a gifted anime auteur (with "anime" functioning as a descriptive word, not a qualifier) whose style, visually and thematically, lies somewhere between Ghibli fare and the work of the late Satoshi Kon. Hosoda employs the curiosity and wonder of a child's eye, and the steadfast moral heart of Miyazaki and co.'s finest works, with Kon's wry humour and tendency towards genre-bending. In Wolf Children, the director strikes an effortless, airy balance that bounds from sentimental (in the best way) to witty, to moving, to silly and back again. Plenty of comedic mileage is milked from the film's central conceit--two children experience particularly tricky growing pains, being half-wolf and half-human--including my favourite moment, wherein the mom must choose whether her sick daughter belongs in the hospital, or the vet across the street. Yet, the pregnant pauses and heart-tugging dilemmas ring just as true, resulting in a pitch-perfect blend of fable and social study.
Rhymes for Young Ghouls is the kind of movie that gets me excited, for both Canadian and, specifically, Native (Aboriginal, First Nations, Indian, whatever term is currently deemed the most acceptable) filmmaking. For years, probably wrongly but nonetheless truthfully, I've lamented the lack of gutsy Canadian cinema that makes it to theatres, and have resented the lack of recognition Native media receives. Jeff Barnaby's film is an antidote for both cinephiliac ailments. While the ultimate success of his grindhouse-y residential school revenge flick remains to be seen, the buzz it's stirring and the talent it displays are heartening indeed. Ghouls is startling, sobering, and still, ultimately, really fucking cool--glorifying Native stereotypes (drinking, swearing, rough and tumbling) while simultaneously exposing the humiliating ghettoization that often comes with living on a reservation and existing within crippling limitations.
I haven't seen recent critical sensations Attenberg nor Dogtooth, but their reception prompted me to see Alexandros Avranas' Miss Violence, as Greece seems to be a recent hotbed for important indies. Concerning the deeply ingrained familial abuse suffered through generations, at the hands of a disturbingly nebbish and nondescript patriarch, the film is provocative to say the least. By default, the subject matter renders the film hard to deal with and keeps it at arm's length, an unsettling swamp of implications and graphic depictions. Avranas shoots the family's flat with a strange hesitation, with shots often lingering moments before or after action occurs in the frame. In addition, the colours are drab and the settings intentionally unremarkable--no relief is offered in the form aesthetic beauty or distracting spectacle. In the end, while the subject matter leaves me inclined to rate the film negatively, I have to respect the commitment to bland normalcy that, as we come to realize, conceals a horrific secret. There is nothing to enjoy in Miss Violence, and (thankfully) the family's suffering is never made to feel pleasurable on any sensory level. This, coupled with the squirm-inducing performances, makes the film an extremely unpleasant but oddly admirable exercise, rather than the wallowing piece of snuff it may have been.
Tweet Post Submit

Do you feel this content is inappropriate or infringes upon your rights? Click here to report it, or see our DMCA policy.
alexandros avranasanimecanadagreecejapanjess barnabymamoru hosodamiss violencequebecrhymes for young ghoulsvancouverviffwolf children