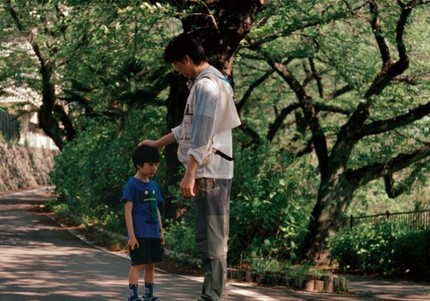 Stray Dogs, the perhaps-last-ever film from Taiwanese master Tsai Ming-liang, is a devastatingly sad, quirk-ily mysterious and slithery film. It's hard to pin down the details of the characters' (a father and his two young children) lives, how much time passes while we live with them, or how they came to be where they are (homeless in urban Taiwan, squatting in a dilapidated building). Yet Tsai's fearlessly long--likely breaking his own record, but I haven't checked--static takes immerse us uncomfortably in each moment, forcing us to forgo finding our plot bearings and simply experience this strange purgatory between pure cinematic magic and documentary-style realism. Those waiting for a classic Tsai musical number or an awkwardly funny sexual encounter will be disappointed, but the director has nonetheless managed something special and new here, emotionally dampening though it may be.

David Lowery's Ain't Them Bodies Saints, while imbued with a compelling dreaminess, felt frustratingly limp. An homage to films like Badlands and Bonnie and Clyde, Lowery's film is a road movie that never leaves town, a crime movie without crime, and a romance wherein the lovers are separated within 15 minutes of the runtime. On paper, these sound like the makings for an interesting deconstruction, or study in withholding; unfortunately, it succeeds as neither of those things and just sort of feels like the whole crew ran out of time and money before anything interesting happened. Rooney Mara manages a moderately charming marble-mouthed Texas drawl, Casey Affleck completely overestimates the amount of tics and mannerisms his character needs, Ben Foster is partly sympathetic/partly creepy, and Keith Carradine provides the only unqualified reason to recommend the film.

In recent years, Hirokazu Kore-eda has consistently made heartwarming tear-jerkers, somehow deftly side-stepping outright cheese and sentimentality. He's certainly a grand manipulator, but he does it with such grace, humanity, and technical skill that it's more than forgivable. Like Father, Like Son is another to add to his streak, and one that had me and many of my cinema neighbours wiping away the waterworks. Though the film concerns a seemingly implausible trope for modern-day Tokyo (two mothers are given the wrong baby at birth and unwittingly raise the other's, until the truth surfaces six years later), Kore-eda and his impeccable cast recognize and fully realize the endless opportunities for comedy, tragedy, and emotional payoff. Beautifully shot and maddeningly sweet--I'm tearing up a little just remembering the camera scene near the end--it's no shocker that Like Father, Like Son has been cleaning up prizes on the festival circuit, now including Vancouver's "Rogers People's Choice Award," decided not by critics, but by festival-goers filling out ballots.
Tweet Post Submit